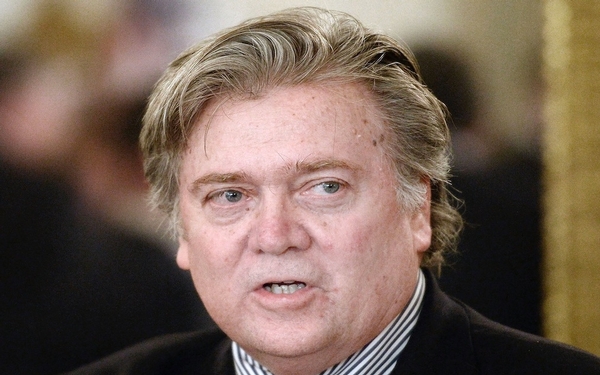 Steve Bannon attends a listening session with manufacturing CEOs on February 23, 2017, in the State Dining Room of the White House in Washington, D.C. (Olivier Douliery/Abaca Press/TNS)

Author Michael Wolff’s pitch to the White House to win cooperation for his book included a working title that signaled a sympathetic view, a counter-narrative to a slew of negative news stories early in Donald Trump’s presidency.

He called it “The Great Transition: The First 100 Days of the Trump Administration.” And in part due to that title, Wolff was able to exploit an inexperienced White House staff who mistakenly believed they could shape the book to the president’s liking.

Nearly everyone who spoke with Wolff thought someone else in the White House had approved their participation. And it appears that not a single person in a position of authority to halt cooperation with the book — including Trump himself — raised any red flags, despite Wolff’s well-documented history. His previous work included a critical book on Trump confidant Rupert Murdoch, the Twenty-First Century Fox Inc. co-chairman.

The published Trump book carries the title “Fire and Fury,” and it paints a portrait of a White House in turmoil, where nearly everyone close to the president believes he is unfit for the job. Wolff’s work has upended the start of Trump’s second year in office, distracting the president and his staff from following up his first major legislative victory — the tax overhaul he signed into law at the end of 2017 — with another big policy push.

The book caused Trump to publicly and dramatically sever his relationship with Steve Bannon, his former strategist, whom Wolff quoted disparaging the president and his family. Trump’s lawyers issued an ineffectual threat against Wolff’s publisher, seeking to stop the book’s publication; instead, it appeared in stores early and rocketed to the top of best-seller lists.

This account of how Wolff reported his book is based on interviews with multiple current and former Trump aides and advisers. Most insisted on anonymity to discuss one of the most embarrassing episodes of Trump’s presidency so far.

Wolff didn’t respond to interview requests submitted to him and his publisher.

Wolff’s entree began with Trump himself, who phoned the author in early February to compliment him on a CNN appearance in which Wolff criticized media coverage of the new president.

Wolff told Trump during the call that he wanted to write a book on the president’s first 100 days in office. Many people want to write books about me, Trump replied — talk to my staff. Aides Kellyanne Conway and Hope Hicks listened to Wolff’s pitch in a West Wing meeting the next day, but were noncommittal.

Several aides said Hicks later informally endorsed talking with Wolff as long as they made “positive” comments for the book, which they said Wolff told them would counter the media’s unfair narrative.

It wasn’t until late August that alarm bells were raised in the White House — when Hicks, Jared Kushner and their allies realized that fellow aides who had spoken with Wolff, especially Bannon, may have provided damaging anecdotes about them.

Publicly, White House officials have laid much of the blame for the book’s most controversial revelations on Bannon, who arranged for Wolff to enter the White House grounds at least a handful of times. “Close to 95 percent” of Wolff’s White House interactions were “done so at the request of Mr. Bannon,” White House press secretary Sarah Huckabee Sanders told reporters.

But privately, Trump allies say other top aides also allowed Wolff into the building, including Conway on multiple occasions.

Some of Trump’s senior-most staff believed that Hicks, one of Trump’s longest-serving aides who has acted as a gatekeeper for his interview requests, had authorized their cooperation with Wolff. They recalled that she encouraged them to engage with the author as long as they made positive comments. Hicks hadn’t greenlit the book, people familiar with her handling of the matter said — but nor did she immediately put up a stop sign.

In fact, for the first six months of Trump’s presidency no one in his White House — including then-chief of staff Reince Priebus and then-press secretary Sean Spicer — stopped Wolff from repeatedly scheduling appointments in the West Wing. He visited about 17 times, according to a person familiar with the matter. Nor did they monitor what Trump’s aides were telling the controversial author.

One former aide, Sebastian Gorka, said he was asked to meet Wolff “by an outside mutual contact” he declined to identify. “The second we met I had a bad feeling about him and his real agenda,” Gorka said.

Wolff conducted himself with assurance on his visits to the West Wing, playing up his relationship with Trump. Officials recall Wolff telling them he’d known Trump a long time and that the president called him “the best.”

Trump said on Twitter on Jan. 4 that he “authorized zero access to the White House” for Wolff, and he has denied ever consenting to an interview with the author.

In addition to Bannon and Conway, the author also spoke with son-in-law and senior adviser Kushner, Budget Director Mick Mulvaney, then-deputy chief of staff Katie Walsh, Priebus, Spicer and others. All declined to comment for this story.

Kushner met with Wolff late in the author’s reporting, only in order to push back on anticipated attacks on him, two White House officials said. Spicer sat down with Wolff at the author’s request because Wolff wanted his help to arrange an interview with the president. Mulvaney talked with Wolff on two occasions only because two senior White House aides asked him to speak with the author about the budget.

Conway participated in one public interview with Wolff at an April 12 Newseum event in Washington marking Trump’s first 100 days. Wolff said on stage that it was the continuation of a conversation with Conway that had begun “early in the transition.” He had interviewed her for a Hollywood Reporter article published Jan. 26.

Conway is mentioned dozens of times in Wolff’s book, including in scenes in which he quotes her directly and describes her thoughts.

Neither Spicer nor anyone else on the White House communications staff ever raised any alarms about Wolff’s prior work, including the Murdoch biography, or warned the staff to be cautious in conversations with him.

Hicks told Wolff in mid-August that he would be granted an interview with Trump in the Oval Office, then four weeks later officially turned him down. Hicks herself, one of Trump’s closest aides, never agreed to be interviewed by Wolff, several people said.

Trump allies said they sought Hicks’ guidance on whether to speak with Wolff because they consider her to be the aide most familiar with Trump’s media preferences, having served as the White House director for strategic communications before moving into her current role as communications director. She previously was a top communications staffer for Trump’s 2016 presidential campaign, and before that worked for the Trump Organization.

Hicks advised at least one Trump ally contacted by Wolff to cooperate with the author if he chose — and if he thought he could shape a positive narrative about the president.

In that regard, Hicks’ handling of Wolff’s book didn’t differ much from previous administrations. One official from former President Barack Obama’s White House said that his administration generally believed in engaging with authors, as long as they were serious journalists and not gadflies or partisan writers.

The White House was also working loosely with book author Ron Kessler, and, with the president’s official blessing, with authors Mark Halperin and John Heilemann. Halperin and Heilemann have previously worked for Bloomberg Politics.

The Obama aide said his communications team kept strict tabs on authors’ work — micromanaging access to the White House, assigning press aides to mind the authors during interviews or asking staff for summaries afterward, closely tracking lines of questioning and making sure writers were escorted off the grounds after their appointments.

That didn’t happen in Wolff’s case, and the matter of who precisely granted him access to the White House is a touchy subject for Trump’s senior aides.

After Kelly replaced Priebus as chief of staff at the end of July, Wolff was no longer allowed to linger in the West Wing lobby, a doctor’s waiting roomlike area where visitors come and go and staff occasionally cut through. But by then it was too late.