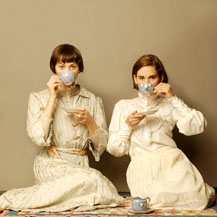 It was too hot to get hot at the Derby May 24. The burlesque dancers eating glass, twirling beach balls on umbrellas and stripping to pasties had no physiological affect other than raising my already escalating blood pressure. By the time the balding middle-aged man at my left asked, “Warm enough for you?” I was ready to rip off the circulation-cutting wristband and strangle him with it.

Then the Ditty Bops took the stage.

It is impossible to smile and suffocate at the same time. Lead by Abby DeWald (vocals, guitar) and Amanda Barret (mandolin, vocals, dulcimer) the Ditty Bops freewheel in musical styles as much as in their cross-country bicycle tour; a gestalt of ragtime, western swing, saloon-samplings, folk and just about every acoustic accruement one could muster.

Barret put down her mandolin after “It's a Shame” and played a washboard and train whistle for “Moon Over the Freeway,” also the title of their latest release. The violet-haired Barret is also quite adept at playing her eyes – she knows when to avert her gaze after a faux-scolding by the more conservative DeWald, look away sheepishly while singing a bawdy line, or saucer them wide while sucking on helium for “Your Head's too Big.”

Barret's peepers are just one way the Ditty Bops, masters of vaudeville, exploit the possibilities of a live show.

“Moon Over the Freeway” was accompanied by an old-time-y shadow-puppet show. For “Sister Kate” Barret announced very special guests – her grandmother's Jazzercise class, who, as the song suggests, “Shimmie[d] like my Sister Kate.” (Thunderous applause greeted Barret's announcement that the Ditty Bops had been added to the Jazzercize program.)

“Your Head's too Big,” with its reference to hot air and balloons, was accompanied by a literal Box of Tricks, out of which Barret pulled lipstick-red helium balloons, Reese's Peanut Butter cups and the washboard.

Not all songs were their own eclectic creations, but they cleverly made others' lyrics their own. Announcing “This is a late-night song, so if you're too young, close your ears,” the skirts sang a song presumably titled “Garbage Man” with the Barret-averting-gaze lyrics, “I am not a carpenter/but I will nail your ass.”

The Rachael Ray of musicians, the Ditty Bops are so cute they make your teeth hurt. Talking about their bike tour across America, DeWald, seemingly unaware of the metaphor, announced “It's going to be sunny, even if it rains.”

That the crowd, complaining of the stifling heat before the show, stayed long after it ended for karaoke with the Bops, is a testament for their ability to turn May gray into sunshine with a snare of the mandolin.
Article posted on 6/5/2006
This article has been viewed 1727 times.