Black Eyed Peas, after years of pop dominance, talk about the radical turn of ‘Street Livin” 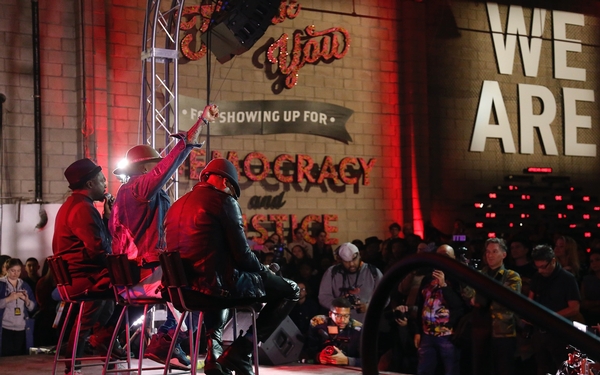 will.i.am, from left, Taboo and apl.de.ap of The Black Eyed Peas, address the crowd at a private event for activism at the Into Action festival in Los Angeles on Jan. 12, 2018.

In a backstage trailer behind the politically charged Into Action gallery show in Chinatown on Friday, three members of the Black Eyed Peas prepared to walk onstage with new music for the first time in seven years.

The gallery was packed with young left-leaning activists, radical-chic paintings and mixed-media installations, and speakers like the former Obama environmental advisor Van Jones.

For fans who only got to know the Peas as one of the biggest-selling pop acts of the 2000s, with multi-platinum, wedding-dance-floor hits such as “I Gotta Feeling,” “My Humps” and “Boom Boom Pow,” it may have seemed a bit incongruous.

But when will.i.am, Taboo and apl.de.ap (longtime singer Fergie wasn’t there because she’s on leave from the group pursuing solo material) walked onto the gallery stage to introduce “Street Livin’,” a dark yet poignant new musing on gun control, prison reform and American racism, it felt like a return to the act’s beginnings as streetwise L.A. rappers.

“It’s not like ‘Oh, the Black Eyed Peas are back and now they’re militant,” will.i.am. said. “Our first big hit was ‘Where Is the Love?’ where we were talking about real stuff. From the brutality of the education system to prison reform, we’ve been out in the community. This is the work we’ve been doing.”

In 2018, it’s another era for the Black Eyed Peas, one that looks a lot like where it started. But in a time of so much challenging, inventive hip-hop — and terrible divisions in American life — where do the Peas fit in? The top of the pop charts, the front lines of activism or somewhere in between?

The act has penned some of the stickiest pop-radio staples of the decade, but the Black Eyed Peas’ time away proved formative for how its members wanted to reset the band — and how they wanted to respond to the changes in America.

“Athletes have been standing up more than musicians,” will.i.am. said. “We have to start standing up too.”

Seven years is an eternity in pop music, but the Peas were far from idle in the meantime. After performing at the 2011 Super Bowl halftime show, will.i.am released a solo record, Taboo overcame a scary bout of cancer and protested the construction of an oil pipeline on the Standing Rock Sioux Reservation, and apl.de.ap opened schools in his native Philippines.

The time away from the pop spotlight only reinforced that there was much more work to be done, and the Black Eyed Peas are in a unique position as top-40 hitmakers with scrappy backgrounds of activists and “conscious” rappers.

“From me beating cancer and going to Standing Rock, to Ap’s work in the Philippines,” Taboo said, “all of this has been a preparation for a bigger fight.”

“Street Livin’” is indeed a hard-left turn from the act’s glossy, raved-up pop tunes. Built around a mournful jazz sample, it’s a forthright indictment of institutional racism in America that feels like an honest shot at matching the poetry and vitality of Kendrick Lamar.

When the group prepped for its Friday appearance, President Trump’s “shithole” comment regarding immigrants from countries in Africa, Central America and the Caribbean had just begun circulating, and the message of “Street Livin’” seemed sadly well-timed.

After all, as will.i.am said onstage when presenting the video for “Street Livin,’” “Whenever you see those commercials about sponsoring a kid for a dollar a day, remember that Ap was one of those kids.”

The song is tied to the group’s new Marvel comic book project, “Masters of the Sun: The Zombie Chronicles,” which hits some of the same notes as the much-anticipated Marvel film “Black Panther.” That is, the work takes a multicultural spin on genre-fiction and sci-fi noir, with a side of augmented reality and voice acting from Jamie Foxx, Queen Latifah and Stan Lee.

It’s not quite an album but more of a multiplatform media project of the sort that will.i.am has been pushing for years as a designer and tech investor.

While it may not match the sheer ubiquity of the group’s mid-aughts pop smashes, the act is fine with that. All the cultural urgency — and big streaming numbers — these days is coming from gritty, intense hip-hop with no illusions about the state of American life right now.

The Peas helped pave that way, even if the group’s youngest fans may not have been alive when its members were cutting those early LPs.

The Black Eyed Peas may not be as edgy as the face-tatted Soundcloud generation or as critically lionized as the Top Dawg Entertainment stable, but the group has experience and a proven history, and in tumultuous times, that has to count for something.

“Right now, I look at hip-hop like punk rock — the Clash, Suicidal Tendencies,” will.i.am said. “Hip-hop is going through its own punk phase, and we’re going to have a new Clash come out of it.”