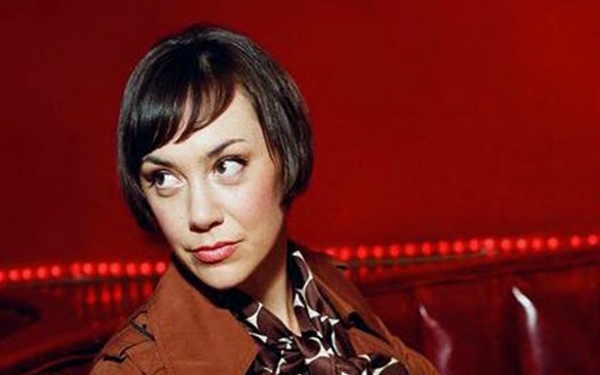 Before Inara George was a musician, she spent four years as the daughter of one.

Well respected today in Los Angeles pop circles for her solo work and for her many collaborations — including the Living Sisters and the Bird and the Bee — George wasn’t even 5 when her father, Little Feat frontman Lowell George, died unexpectedly of a heart attack in 1979.

The tragedy — Lowell was only 34 — went some way toward defining Inara’s childhood, says the singer, who grew up in Topanga Canyon with her mother. As she began writing her own songs, though, Inara became determined to establish a presence outside her father’s legacy.

“I tried to be as gracious as I could about it,” she said the other afternoon. “But I would never bring him up or make him part of my spiel. And it definitely wasn’t something I’d write a record about.”

On “Dearest Everybody,” her fourth solo album, George, 43, finally turns her attention to the death of the man known for founding one of rock’s cleverest, most idiosyncratic bands. The work, due Jan. 19, opens with “Young Adult,” in which she recounts a memory of “riding down Sunset making records at night” before acknowledging that her dad left her with “a calling in my gut.”

In “A Bridge,” the mother of three tells an unnamed someone, “I want to hear my children say your name.” And then there’s the stirring “Release Me,” which George wrote about her own mom’s struggle to move on after Lowell died.

“I’ve been the best at doing the best that I can/ I’ve spent my life in the shadow of a man,” she sings over a gentle, old-school soul groove, “Now I want to be the writer of the song/ And a love, not just a longing.”

Over lunch at her home in the Hollywood Hills, George said “Dearest Everybody” isn’t entirely about her father, whose best-remembered tunes with the funky-rootsy Little Feat include “Dixie Chicken” and “Willin’.” But Lowell’s death, she said, shaped her “relationship with loss,” which is the album’s true subject.

“He’s my gateway” to the larger idea of mortality, she explained as she sat at a dining table cluttered with Legos — evidence of the young kids she shares with her husband, director Jake Kasdan.

“This is something we’ve discovered at our age,” she continued. “Earlier it was like, ‘Oh, this is the moment when we’re all getting married and having babies.’

To her point, the album includes a song she wrote for a friend who suffered a miscarriage and one for a neighbor whose husband recently died.

“I would be a liar if I didn’t say this scares me half to death,” she sings in “House on Valentine,” “Who will I be without you in the years that I still have ahead of this?”

George’s goal in those tunes, as in “Release Me,” was to “try to climb into someone else’s point of view at these tough moments,” she said. And that’s a job for which she’s well suited, according to Van Dyke Parks, the veteran arranger and producer who said George is “absolutely loaded with empathy.”

One of Lowell George’s closest friends during his lifetime, Parks — beloved by music nerds for his work with Randy Newman and the Beach Boys — joined Inara in 2008 for “An Invitation,” an album of her songs set to his whimsical orchestral arrangements.

But if “Dearest Everybody” puts across heavier themes, Parks is right when he says that Inara’s sensitivity doesn’t come at the expense of a sharp sense of humor.

In “Somewhere New,” about a person seeking a fresh start, the narrator stuffs a pair of underwear in her pocket and dashes off to the airport: “I’ll kiss every stranger, I’ll go on a bender/ Might send you a letter, or maybe I’ll never.”

That lightness of touch comes through in the album’s sound too, which largely relies on acoustic instruments and George’s carefully layered vocal harmonies. The singer started “Dearest Everybody” on her own at home, recording songs on guitar and an upright piano she inherited from her grandmother (which she learned to play as a byproduct of her children’s lessons).

Soon, though, she found that her busy family life was less than conducive to the demands of record-making.

“I just can’t sit and fiddle with things for hours — I have to pick up the kids from school,” she said with a laugh between spoonfuls of homemade chicken soup. “So basically it would never be finished, and it wouldn’t even sound that good.”

For help she turned to her old friend Mike Andrews, who produced George’s previous albums and also composes for film and television. He called in a handful of L.A. players to flesh out the arrangements; “Young Adult” features restrained strings, while “Slow Dance” has a crisp folk-rock beat that belies its title.

Still, Andrews said George’s songs were strong enough that they “didn’t need to be stylized in any way.” He sought to preserve the intimate, conversational quality of George’s singing, which he compared to “a friend talking to you.”

That’s a markedly different approach than the one George takes in the Bird and the Bee, her arch electro-pop duo with the producer and songwriter Greg Kurstin, who in the last few years has become an in-demand studio partner to the likes of Adele and Kelly Clarkson.

In that group George views her singing as a means of portraying various characters — the lonely woman, for example, trying to seduce a medical professional in “Doctor,” from the Bird and the Bee’s 2015 album, “Recreational Love.”

Yet the songs on “Dearest Everybody” are as personal as any she’s written, George said. Part of what allowed her to dig into her family history was an easing of her anxiety about being seen as trading on her father’s name.

“Now that I’m older I feel like I have less to worry about,” she said. “I’ve created this whole oeuvre of my own” — she used air quotes to counteract the grandiose term — “that isn’t part of his thing.

“Lots of my fans have no idea who he is. So I’m not afraid of it anymore.”

This month George will support the album, which she’s releasing herself, with a brief run of concerts in the U.S., starting Friday at the Masonic Lodge at Hollywood Forever Cemetery.

Her expectations are modest, though she’s hardly uninterested in reaching an audience: After lunch, she showed me a data report from Spotify that broke down where in the world her music is being streamed.

“We could go the Philippines and have a huge show!” she said, pointing with some excitement to numbers that reflected a surprisingly robust audience in Southeast Asia.

She’s also kept her name in circulation with freelance gigs like her cameo on the Foo Fighters’ latest album (which Kurstin produced) and her performance last year at the El Rey Theatre as a temporary member of L.A.’s reunited That Dog.

The Bird and the Bee are finishing up a record too, an all-covers sequel to their 2010 tribute to Hall & Oates.

Add all this stuff together, George said, and she’s got a musical career not unlike that of Lowell George, who never found superstardom with Little Feat but who succeeded in cultivating a loyal fan base that followed his every unlikely impulse.

“If I have anything in common with my dad, it might be that,” she said, her face softening with what looked like gratitude.