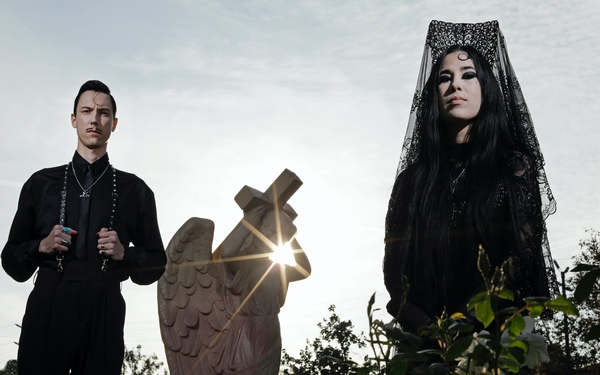 Zachary and Alexandra James of "Twin Temple," are a self-described "Satanic Doo-Wop" group and active Satanists.

In November, in the candlelit basement of a house just above the Silver Lake Reservoir, Alexandra James walked over to an altar where her husband, Zachary, waited near a bleached human skull, teeth locked in eternal rictus. From the altar, she lifted a sword and drew points across his chest while a circle of onlookers watched solemnly (well, a few giggled too). An organist played eerie minor key chords and Alexandra turned to face the group.

“On this altar we consecrate swords to direct the fire of our unholy will,” she said. “A human skull, symbol of death. The great mother Lilith created us all, and will destroy us all.”

The Jameses had planned the ritual as the climax of a low-key house party that included a dozen or so friends associated with ritual magic — artists, writers, rock musicians who freely mingle occult vocabularies (Satanist, coven, witches), none taken too literally. But a bigger moment came a few hours later when word circulated that Charles Manson had died. Far from mourning a man whose crimes burned satanic imagery into the American mainstream, everyone cracked beers in celebration and jammed on psych rock tunes. Bonnie Bloomgarden, the singer for the band Death Valley Girls, joked that Manson’s spirit would be reincarnated as a small dog and that she’d probably accidentally adopt it.

It was a great night for a heterodox generation of new self-described Satanists who are upending old “Rosemary’s Baby” and “Helter Skelter” stereotypes in service of radical politics, feminist aesthetics and community unity in the divisive time of Trump.

Given the never-ending chaos in American life, when nuclear war seems to many to be just one juvenile presidential tweet away, a coterie of artists are rediscovering Satanism’s imagery and rituals in a city with a long, rich and weird history of contrarian philosophies. Traditionalists might debate if any of it is properly “Satanic” at all; this new take is much more feminist than nihilist, flexibly self-aware and better versed in internet culture than orthodox theology.

“In terms of the aesthetics of the occult, it’s everywhere you look. There are so many young women especially who use occult imagery to define their identity,” said Anna Biller, a director whose 2017 film “The Love Witch” beautifully revamped ’70s Technicolor genre films for our era of wry misandry and new social movements.

“What I’m trying to do is to transform the witch from a figure of male fear and fantasy into a figure of female power and sexuality. For some women it represents healing, for others, raw power, for others, the freedom to be unorthodox or to find their own spirituality outside of the family system,” she said.

“It’s important for women to try to reclaim our images for ourselves.”

That is the animating force behind this new wave of interest in both Satanism and the occult (which are two separate things, sometimes mingled together). If satanic rituals of old were centered on smashing Christian orthodoxy and middle American propriety, this form of Satanism explicitly uses a huge range of ideas to give shape to the inchoate rage felt by so many — especially women and other marginalized groups.

These new converts believe that when confronted with so much chaos, one way to make sense of it is to conjure it themselves.

“If you don’t give people some sense of magic and community, you get the Proud Boys,” Alexandra said, referring to the fraternal neo-fascist group created by Vice Media co-founder Gavin McInnes. Zachary agreed: “People like the Proud Boys have their own social clubs, and that’s black magic. Instead of running away from that, we need to find better ways of organizing ourselves.

“In these times,” he added, “a lot of people want to not feel helpless. And Lucifer was the original rebel angel.”

Like in any extreme subculture, the definitions and lessons of Satanism have always been fought over (whenever anyone in the scene talks about Satan and magic, it’s usually not literal but a metaphor for human potential). Was Aleister Crowley’s Thelemic spiritual thought or Anton LaVey’s atheist Church of Satan the more effective path? Should any of this be a heartfelt religion, or just a psychological tool and a way to needle the pious?

L.A. history is filled with outsiders coming together under the mantle of the occult, a sphere of sometimes-opposing worldviews, which range from atheist Satanism to neo-pagan traditions like Wicca. They left their mark on the city in various ways.

Jack Parsons, an early figure at CalTech and co-founder of the Jet Propulsion Lab, was a Thelemite who worshipped at the Ordo Templi Orientis, as did his wife, Marjorie Cameron, an artist whose work recently had a retrospective show at MOCA PDC. They followed Crowley’s school of thought, whose main principle is “Do what thou wilt shall be the whole of the Law. Love is the law, love under will.” Their onetime friend L. Ron Hubbard founded Scientology.

LaVey’s Church of Satan broke with Crowley’s spiritual side and structured itself as a platform for rejecting all supernatural religion. Before the Manson murders, he had a Hollywood contingency that included Sammy Davis Jr. and Mansfield.

Some in the current generation of self-described Satanists seem more flexible on doctrinal disputes, favoring inclusivity, especially for women, often the losers in traditional religion and radical politics. L.A.’s chapter of the Satanic Temple has a mission statement that promises to “encourage benevolence and empathy among all people, reject tyrannical authority, advocate practical common sense and justice, and be directed by the human conscience to undertake noble pursuits guided by the individual will.”

LaVey wouldn’t approve, but there are also common threads here with young women of color exploring traditions like Santeria or Yoruba beliefs for rebellion and self-care, including Bri Luna, the black and Mexican Seattle mystic and artist behind the Hood Witch brand, which just received a glowing profile in Vogue.

Ruth Waytz is a magistra in the official LaVey-founded Church of Satan, whose mission is “dedicated to the acceptance of man’s true nature — that of a carnal beast, living in a cosmos that is indifferent to our existence” (it also maintains a hilarious, politically salient Twitter feed). For her, Satanism should also be a corrective to contemporary liberal pieties.

“Our writers, directors, producers, and designers lead the charge on our real-world individualist approach — not some spooky, occultnik mumbo jumbo, which is often anti-Satanic and mired in mysticism,” she said. “LaVey formulated Satanism as a resistance to the collectivist ‘resistance’ of the ‘60s. His philosophy is one of individual self-empowerment, of a will to power via the manipulation of the carnal and material world. And sometimes that takes unconventional, controversial forms because Satanists are often the outcasts within their externally defined social groups.”

Even among the merely Satan-curious, the imagery seems to be popping up all over art, film and music.

The Jameses’ group — not officially affiliated with any one strain of Satanism — is loosely based around their doo-wop band Twin Temple, which sounds like the Marvelettes if that group had pined after the blessings of Baphomet instead of the boy next door. They got their start playing shows for the music-activist collective Play Like a Girl. Dressed in uniforms of black leather and lace, the couple made quite a striking duo on the town, and soon enough others wanted in on their scene.

“They were these barfly regulars with a Gomez/Morticia Addams vibe. We would riff on all things weird,” said Brent Smith, a novelist who met them at the rock bar Harvard & Stone. He sees their rituals as less of a religion and more of a structure for community and making art. “It’s hard enough inspiring people in L.A. to congregate,” Smith said. “But there’s also real philosophy there and the means to apply it. Rituals keep you accountable to the work you’re doing. Satanism doesn’t require ideology, and it’s ideology that so often kills writing.”

On Halloween, much of the group gathered in the basement of the Hollywood bar Black Rabbit Rose, where a who’s who of modern occultists gathered for rituals, rock shows and talks from the scene’s demimonde elite.

Avant-garde director Kenneth Anger (whose “Lucifer Rising” is a favorite of Satanists and starred eventual Manson family murderer Bobby Beausoleil) took questions from fans like Matt Skiba, the Blink-182 guitarist and Satanist. Noise musician and prominent Satanist Boyd Rice interviewed Karla LaVey (daughter of Anton LaVey) about war stories from the scene’s midcentury heyday. Glenn Danzig, founder of the horror-punk band the Misfits, gabbed with fans in the VIP suite and showed off an archive of rare last-days-of-Jayne Mansfield photographs alongside the Lethal Amounts gallery owner Danny Fuentes, who organized the party and often hosts exhibits of transgressive occult-y art.

At the witching hour, Twin Temple performed a full set, capped with a ritual during which it performed an anti-baptism of its coven-mate, the young film director Kansas Bowling. Blood-smeared and stripped down to nearly “sky-clad,” as they put it, Bowling was offered up in service to the goddess Lilith as an avenging angel for crimes against women.

“Some of these men, like Harvey Weinstein, are finally being held accountable for their crimes,” Alexandra yelled at the crowd. “What do you think, shall we burn him at the stake? Or shall we drown him and see if he floats?” The crowd erupted in cheers for both.