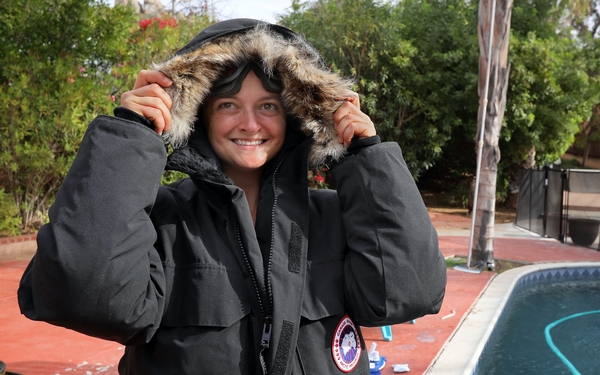 Later this week, Rose Sandler will be riding a camel across the Gobi Desert in Outer Mongolia in temperatures as low as negative 40 degrees. She can hardly wait.

The three-week winter excursion is just the latest globe-hopping adventure for the 36-year-old aerospace engineer. Ever since she scuba-dived with sharks at age 13, Sandler has been pursuing the unusual in outdoors experiences.

She has ice-hiked in Patagonia, fished for lobster in Maine and dived in the Caribbean sea. But over the past three years, she’s taken her adventurous spirit up a notch with a series of long-distance horse races around the world.

Sandler said her passion for adventure comes from a restless spirit, a love of horses and the experience of growing up in a nature-loving family.

“I call it the itch,” she said. “I get the itch to go on these trips every once in a while because it’s in my nature. I like to travel and I love being out there on my own where I’m right on the edge of civilization.”

She’ll be way past that edge when she flies Jan. 16 to Uulaanbaatar, the capital city of Mongolia. With a group of seven fellow international adventurers, she will spend three weeks riding a Bactrian camel (that’s the two-hump kind) through sand dunes, mountains and a steppe region sparsely populated with nomadic families.

To prepare for the trip, she’s bought and borrowed a mountain of Arctic-grade gear and clothing that she’ll wear seven layers deep. She’ll coat her feet with beeswax to avoid trenchfoot, sleep in a ger (portable hut), and subsist on a diet of dried curd, salt tea and airag, which is fermented mare’s milk.

“I can’t tell you what I’m most excited about,” Sandler said earlier this month, as she tested and tried on some of the gear at her Poway home. “I love every single part of this. Even the packing is fun.”

Sandler grew up in Pipersville, Pa., where she enjoyed riding bikes and horses. A favorite pastime with her mom since childhood is researching and identifying native grasses, trees and plants on their nature walks.

Her father ran a crane operating business, so Sandler grew up with a love for taking things apart and putting them together again. She studied engineering at Penn State with graduate work at the University of Connecticut and North Carolina State. Her specialty is engineering composite materials for aircraft.

“When I tell people that, I get a blank stare. It’s easier to just tell people I break stuff and glue stuff to other stuff,” she said.

While living in Virginia in 2014, a friend suggested they compete in the Mongol Derby. Not realizing how grueling the race would be, Sandler signed up but her friend dropped out. Then she got fired from her job and totaled her car in the same week. It ended up working out, she said, because it gave her time to train.

Changing horses two to four times a day, Sandler rode 80 to 90 miles each day across the Mongolian steppe in broiling temperatures. One night she didn’t make it to the race camp so she talked her way into sharing the hut of a nomadic couple who spoke no English.

Despite the heat and wear and tear on her body, Sandler said the hardest part of the journey was mental. Although she had one meltdown on day six, she never considered quitting.

On that trip, she met adventurers from all over the world and has joined several of them for follow-up trips. All her travels are self-funded with savings and credit cards, though she trims her expenses by borrowing equipment and scouting discount air fares.

In 2015, she moved to Poway and — with the support of her new boss — took off for Iceland, where she and 14 other riders traveled 300 miles across the country with a herd of horses.

The following year, she competed in the inaugural Race the Wild Coast, where she rode three horses over three days along South Africa’s southeast shoreline.

One of the most challenging races was also the shortest, last summer’s Tevis Cup. Riding a borrowed horse that she’d trained for the race, she came in 37th place in the 24-hour ride up and down 18,000 feet of terrain between Lake Tahoe to Auburn. The ride is so difficult, only about half of last year’s 137 competitors finished.

This month’s camel adventure was actually her travel fallback plan. She came up short of votes in her quest last month to be selected for the Fjallraven Polar, a 186-mile Iditarod-style dogsled race in Norway and Sweden.

Undaunted, she still dreams of doing a dogsled race someday. And one day she hopes to compete in the Patagonia Expedition Race, a 10-day team wilderness competition involving mountain-climbing, hiking, biking and kayaking across Southern Chile with only a single map and compass.

“This is isn’t something I like to do, it’s something I need to do,” she said. “Being out there meeting people and experiencing new cultures is just who I am.”