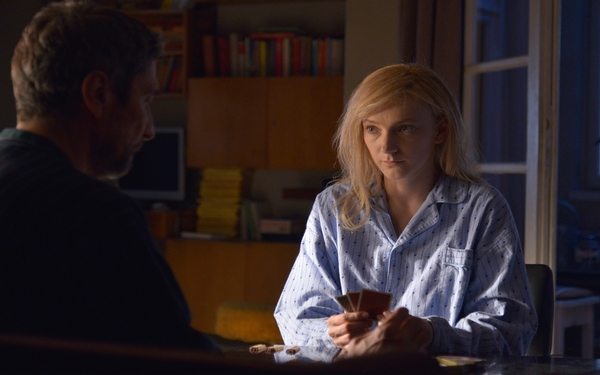 Geza Morcsanyi and Alexandra Borbely in "On Body and Soul." (Netflix)

A transgender woman grieving the loss of her lover, an insult that riles tensions in the Middle East and a vanished boy in snow-swept Russia — stories of personal struggle against the often cruel designs of larger forces — anchor this year’s list of Academy Award nominees for best foreign language film.

Geographically, the five nominated films stretch from the discos of Santiago (“A Fantastic Woman”) to the outskirts of Moscow (“Loveless”) with stops in Lebanon (“The Insult”), Hungary (“On Body and Soul”) and Sweden (“The Square”). The tales — from some of the world’s most insightful and idiosyncratic directors — include a modern-day fable of love, a hate born from war and an unreconciled past, and a satirical skewering of a well-heeled, ego-driven art world that often falls short in its espousals of human empathy.

The seemingly endless animosities of the Middle East propel “The Insult,” Ziad Doueiri’s examination of pride and the relentless tug of past injustices in a part of the world where a slight carries the weight of a stone. A confrontation between a Palestinian and a Christian spins out of control in Beirut, forcing each to understand the sins committed by, and inflicted upon, the other. It is, like so much that radiates from the Israeli-Palestinian conflict, a meditation and metaphor exploring how brutal legacies infect the present.

“This is the first time that Lebanon enters the Oscars race. It took me by complete surprise,” Doueiri said. “It is a great day for freedom of speech. We have been subjected to intimidation and people who are trying to silence us from telling the truth, but today the will of the people prevailed. I want to thank the incredibly dedicated Lebanese cast who gave their best in spite of the intimidation tactics they were faced with. I also wish to thank the producers and the crew from Lebanon and France. This is the happiest moment in my life.”

“A Fantastic Woman,” directed by Sebastián Lelio, traces the indignities and suspicions thrust on Marina (Daniela Vega), a transgender woman, after the death of her lover, Orlando. Marina is despised by Orlando’s family and humiliated by societal strictures in a patriarchal Chile. Like many persecuted for their sexual identities, she must find a way to grieve and move on, relying on an inner spirit that is at once resilient and sublime.

The subconscious channels love between two misfits in “On Body and Soul,” a fantastical and moving glimpse of the human heart by Ildikó Enyedi, the only woman director among the nominees. In a Hungarian slaughterhouse, a dour business manager and a quality control worker with autistic tendencies discover that they share the same nightly dream. The mystical romance of their sleep slips into the waking world in an eccentric allegory that unfolds against the purity of a winter forest and the industrial precision of the killing floors.

The divorcing couple in “Loveless,” directed by Andrey Zvyagintsev, revile each another so much that they are blind to what they have done to their 12-year-old son. A reckoning is at hand when the boy vanishes and the couple must confront the neglect and torment the boy has endured. The film is a portrait of self-absorbed, cruel parents living in an indifferent Russia with its news of the Ukraine war, corruption and predictions of the apocalypse.

“We are absolutely thrilled by this recognition from the academy,” said Zvyagintsev, whose 2014 film, “Leviathan,” which also probed Russia’s dark heart, was nominated for best foreign language film in 2014. “It means a great deal to us as filmmakers, and it encourages us to continue to tell the stories that move us, in the way we want to tell them.”

Ruben Östlund’s “The Square” is a many-barbed satire of art and the highly cultured. The ensemble comedy revolves around the impeccable curator of a Swedish museum who is forced into damage control after his cellphone is stolen and he is nudged beyond his liberal-minded and financially secure world. The film, which won the Palme d’Or at Cannes, cleverly shatters the façade of the smug cocoon of the intellectual elite as it touches on Europe’s unsettled conscience.

“What ‘The Square’ is dealing with is that we have to believe in the power of community and organizing ourselves in order to make things happen,” Östlund said. “To believe in a bigger society and the humanistic manner of this are things we have to be reminded of in these very individualistic times. That is the core of the film.”

He added that in cinema “we have to ask ourselves what are we missing out on. What do we need to tell? We have to do this without looking at the economical aspect. We have to step back and think: What is the most important thing with art and with expressing ourselves?”