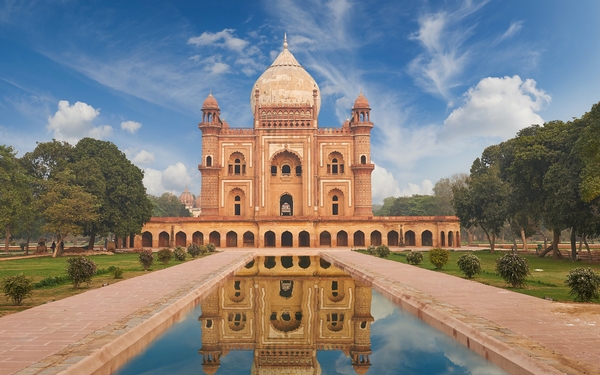 One of our common travel woes is excitedly visiting a new destination, only to be met with a tourist trap that’s lost most of its culture (we’re looking at you, Bali and Cancun). Fortunately, there are many destinations that are able to attract millions of visitors each year while retaining the region’s way of life. Read on for our picks of eight cities that are popular tourist spots, but still pack a lot of local culture.

India’s capital attracts millions of visitors each year with its stunning temples, spice- and handicraft-filled flea markets and immersive museums. Although not the easiest city to visit — expect unpredictable driving, the worst pollution on earth and massive crowds — travelers are rewarded with a culture-packed experience that’s sure to stay with them. It may lack the Taj Mahal (that’s a four-hour drive north) and the beaches of Goa, but tourists will have enough sights to fill several days in New Delhi. Top attractions include the gold-topped Gurudwara Bangla Sahib, the beautiful and peaceful Lodi Gardens and National Gandhi Museum. Delicious food ranges from cheap street eats to Michelin-starred dining.

A significant religious city for Christianity, Judaism and Islam, Jerusalem is a holy city west of the Dead Sea. Its positioning in the Middle East mean it’s close to unrest, but approximately 3.5 million travelers head to this historic city each year. The walled Old City is home to many sacred sights, including the Western Wall, Dome of the Rock, Church of the Holy Sepulchre and Temple Mount. Yad Vashem — The World Holocaust Remembrance Center — is a can’t-miss museum a 20-minute drive west of the Old City. While important religious and historic places fill the city, Jerusalem is also overflowing with cozy coffee shops, bustling markets with incense, dried fruit and scarves, and striking art galleries.

Tokyo embodies a modern metropolis with centuries-old history. Between historic temples and well-manicured gardens that burst with cherry blossoms in the spring are towering skyscrapers, bright billboards and buzzing — yet immaculate — sidewalks. After exploring the sacred Senso-ji Temple and Samurai Museum, tourists can take in modern-day offerings like cat cafés, conveyor-belt-delivered sushi restaurants and iconic shopping and street fashion. Reliable public transportation, world-renowned dining and polite locals add to the city’s appeal, though beware of high prices and prepare for overcrowding.

Despite some tourist-trap restaurants and brand-name hotels occupying its center, Florence is an undeniably charming city in Italy’s Tuscany region. Rich in history, this cobblestone city is home to the 13th-century Duomo, 1442-opened Basilica di Santa Croce and medieval Ponte Vecchio (Old Bridge). Art lovers will be particularly excited to visit the over 80 museums here, some of which house works by Michelangelo and Botticelli’s “Birth of Venus.” Italian cuisine is unsurprisingly top-notch — head to the outskirts of the city for the most authentic fare — and fine goods sold here include leather, gold and silver. Sports bars and raging nightclubs also fill the streets.

A port city of about five million, St. Petersburg is the cultural center of Russia. Established by Peter the Great in 1703, its history is on display at the multicolored Church of the Savior on Spilled Blood that’s rich with mosaics, the Grand Palace with exquisite gardens dotted by gold sculptures and fountains and the Kazan Cathedral, designed in 1811 to resemble St. Peter’s Basilica in Rome. The State Hermitage Museum and Winter Palace has a magnificent display of art, while the Mariinsky and Alexandrinsky Theatres put on exquisite ballets, plays and operas. Every type of nightlife venue can be found here, plus ample green spaces and charming cafés.

Straddling both Europe and Asia, Istanbul showcases its long history of being ruled by the Greeks, Romans, Venetians and Ottomans in ancient and modern sights. A prime example is the breathtaking Hagia Sophia, a Byzantine church that became a mosque and then a museum, and the Blue Mosque wows with its domed structure adorned on the inside with hand-painted tiles. There are no shortage of historic and beautiful sights, but travelers should plan on seeing performances of the Whirling Dervishes and belly dancers, as well as getting an authentic scrub at a Turkish hammam. Also shop for handmade goods at the Grand Bazaar and feast on fresh fish, yummy kebaps and mezes.

Arguably Spain’s coolest city, Barcelona seamlessly melds jaw-dropping Gothic and Modernist architecture with a hopping beachfront, large expanses of greenery and a party vibe. History and art buffs will be drawn to the Basilica of the Sagrada Familia, Casa Batllo and world-class MACBA museum, while foodies can sample cuisine by renowned chefs like Ferran Adria. Shopping is a popular pastime here, as is taking advantage of the vibrant nightlife that spans the whole city (though particularly El Raval neighborhood). There’s a slice of life for everyone in this cosmopolitan city.

A boutique hotel pick: Hotel DO

Paris is often regarded as the most romantic city in the world, and though it’s always one of the most visited, it still retains that “je ne sais quoi.” Days here consist of enjoying baguettes and croissants with espresso on sidewalk tables facing the street and strolling charming streets lined with couture fashion boutiques, while evenings see groups drinking wine at the Champ de Mars park under the light of the Eiffel Tower. Add in renowned museums like the Louvre, d’Orsay and Rodin, not to mention beautiful architecture like Notre Dame, Arc de Triomphe and Palais Garnier opera house, and it’s easy to see why the City of Lights is such a beloved city.