Why they won’t be asking ‘Who are you wearing?’ on the red carpet this season 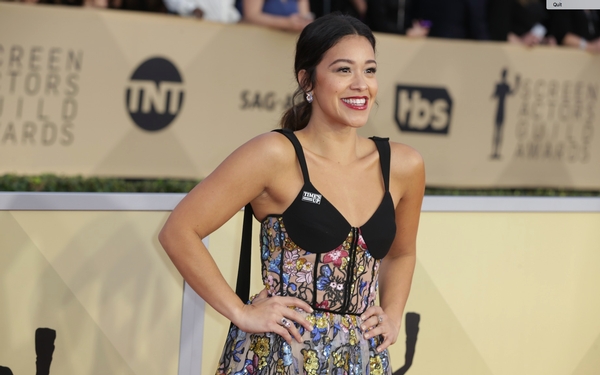 Despite the return of the haute hues, fashion didn’t make a full red carpet comeback.

So instead of asking Alison Brie who was responsible for her one-sleeved gown sheath — it was Peter Dundas — E! host Giuliana Rancic chatted Brie up about the Time’s Up movement before zeroing in on brother-in-law James Franco’s facing sexual misconduct allegations.

The only real style chit-chat throughout my hour and a half viewing time: a quick convo about Stranger Things’ Millie Bobby Brown’s white Converse and Dakota Fanning’s perfect eyebrows.

As red carpet season began this year, the industry was grappling with accusations of sexual misconduct and issues of equal pay between the sexes. The “Who are you wearing?” question is the meat of modern fashion coverage thanks largely to E!’s beloved Live from the Red Carpet show, but it makes sense that in the current climate, its producers are tossing it aside like last season’s kitten heels.

However, the Golden Globes and SAG Awards are just warm-up acts. This week, red carpet season revs up with Tuesday’s Oscar nominations and this weekend’s Grammy Awards. For these celeb-studded award ceremonies, the red carpet has become almost as important as the shows themselves, largely due to E!, whose pre-Golden Globes coverage this year drew upward of 50 million for total engagement — a combination of online and social interaction, as well as television viewers.

I’m wondering whether hosts will continue to boycott the label inquiry. On one hand, the lack of the million-dollar question on the red carpet is a reflection of what’s happening in the real world. As we saw during the Golden Globes, it’s possible to appreciate pretty dresses without obsessing over the designer names. (This is one of the reasons we aren’t doing red carpet coverage at Saturday night’s Academy Ball.)

“The moment of ‘who’ is over,” said Andre Leon Talley, a longtime contributing editor of Vogue who has spent his career chronicling the “who” and “why.” “We don’t have time to worry about who is wearing what. With the issues of victimization and sexualization in the news, this shift just feels appropriate. We have bigger things to worry about.”

Though we may be feeling all smug about our decision to stop reducing accomplished thespians to bedazzled coat hangers, the media may just be damaging an industry that thrives on name recognition.

“A lot of custom work went into the gowns these women wore on the red carpet,” said Heather Cocks, one-half of the fashion bloggers behind “GoFugYourself.” “And it’s only fair that the designers get credit for it.”

That’s why many designers give actresses custom gowns for these red carpet events. They’re putting names in front of millions of people who may not have heard of them before. For those in the know, a red carpet mention can reinforce a designer’s relevance.

In 1994, Joan Rivers revolutionized red carpet coverage on E! when she started asking starlets, “Who are you wearing?” Back then, only a few designers — think Oscar de la Renta and Yves Saint Laurent — were household names. When Rivers became dogged about asking the then-intrusive question, the world paid attention.

Thanks to Rivers and other fashion-forward pop culture forces, like HBO’s Sex and the City, bringing designers’ names into lexicon, whom the rich and famous wore became almost as important as the rich and famous themselves. As a result, labels from Christian Dior to Manolo Blahnik underwent a resurgence. And designers like Jason Wu, Tadashi Shoji, and Project Runway Season Four winner Christian Siriano built solid careers from the red carpet exposure, which translated to ready-to-wear sales. It wasn’t just the designers who were thrust into the spotlight, either. Stylists carved out names for themselves, as well.

The internet further fueled the “Who are you wearing?” obsession. Celebrity fashion blogs like “GoFugYourself” and Philadelphia’s Tom and Lorenzo live for red carpet season, when visitors come to their sites in droves to find who is wearing what. And social media allowed us to become commentators ourselves.

What was once a secret society was now accessible to everyone.

“Designers don’t need [a red carpet plug], they expect this,” Talley said. “When the reality is people can find whatever they want to online.”

But those online hits to Vogue.com aren’t alone the boon the designers are used to, Cocks argued. And, she said, it’s about more than the red carpet look of the moment. The truth is not many of us are going to buy the Michael Kors gown we saw so-and-so wear on the red carpet. But we will buy the Michael Kors bag, shoes, or sunglasses available at Macy’s. That’s how the designer will be impacted, Cocks said.

It’s the not the dress these designers are selling, it’s their name.

Furthermore, Cocks said, there is the admittedly unfair, and not so subliminal message that a woman who revels in the confection of a pretty dress doesn’t have much substance.

“You can be a person who cares about the world and still talk fashion,” Cocks passionately pointed out. “After all, showing up well-dressed on the red carpet is the same as dressing appropriately for work. It’s those who believe that that’s not true, that she is somehow being objectified, they are part of the problem.”

With so much at stake, it’s hard to say how red carpet commentators — namely E! — will proceed.

“We typically follow the lead of our guests in terms of topics, and for the Golden Globes, many of our viewers enjoyed hearing from the women behind the #MeToo and #TimesUp movements,” said Jennifer Neal, executive vice president of marketing and executive producer of live events at E! “Our coverage is always evolving, and for the Screen Actors Guild Awards we continued to weave in a wide variety of important topics throughout the night.”

Sunday night, that meant turning to the internet, and without E!’s questions, even Vogue.com’s designer-name coverage wasn’t as complete as it usually is. As for the Grammys and Oscars, E! wouldn’t be specific.

That’s OK, says Elissa Bloom, executive director of the Philadelphia Fashion Incubator. Bloom says fashion won’t suffer, because emerging and established designers know the importance of blasting out who is wearing them on the internet. And the move away from the reliance on red carpet shoutouts may also foster more creativity on the red carpet.

“No one wants to be dress-up dolls anymore, not even celebrities,” Bloom said. “We want to be seen as individuals. We are stepping into our truth.”