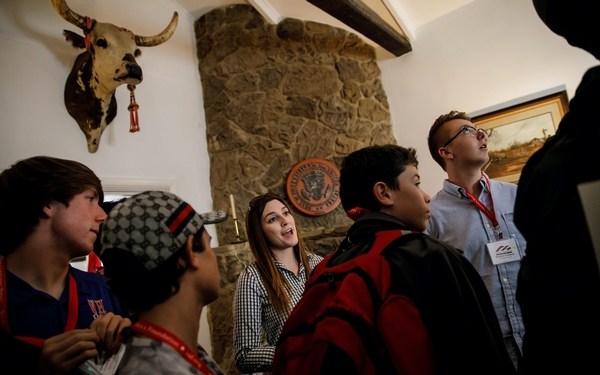 High school students take a tour led by Amy Lutz, center, of the Reagan Ranch in the Santa Ynez Mountains, in Santa Barbara, Calif., on Sept. 22, 2017.

One by one, chatty teenagers in jeans walked across the stone patio that Ronald Reagan built by hand to ring the bell at the former president’s coastal mountain ranch. Nancy Reagan tugged on that same rope decades ago to call her husband home for lunch when he was out horseback riding or working in the stable.

On a bright fall day, the Virginia-based Young America’s Foundation shuttled in nearly 100 teenagers from 46 different states for a three-day conference at Rancho del Cielo, hoping to summon Reagan’s spirit.

They were not there for a history lesson.

Instead, YAF leaders gave the high school students gathered at the late president’s properties modern-day pointers on what it means to be a Republican, and tips for fending off what the group views as the other side’s indoctrination.

The foundation promotes itself as a political counterweight to the liberal thought that its supporters say courses through American colleges, and spends millions every year to fund YAF clubs and seed conservative activism on campus.

The Young America’s Foundation, born in the politically turbulent late 1960s, has become one of the most preeminent, influential and controversial forces in the nation’s conservative youth movement, backed by $65 million in assets largely underwritten by the wealthiest of the modern-era hard right.

Though a force in the conservative movement for decades, the foundation’s aggressive and confrontational tactics have become a beacon of right-wing empowerment during the rise of President Donald Trump.

The high school students here broke into small groups and scribbled lists of what they considered true conservative ideals on white boards. One circle made quick work of its task: a strong national defense, Christian values, limited government, anti-abortion, informed patriotism and capitalism.

“A lot of people, particularly liberals, think government is the one who gives them rights — as opposed to God-given rights,” Brown said.

Afterward, when the groups gathered to compare their lists, foundation President Ron Robinson told the students that the words they use to express their conservative beliefs are essential. For instance, he said, instead of saying they support “capitalism,” it would be better to use the phrase “free enterprise” or “entrepreneurship.” “Capitalism,” Robinson said, is disparaged by leftists and does not poll well.

“The terminology battle is very important,” he added.

Robinson also told students that Social Security was a Ponzi scheme and narrated a slide show on media bias against conservatives, showing them Time and Newsweek magazine covers with headlines disparaging Trump and other Republicans.

It was just one of the many dire warnings the students received. They were urged to stand up for their beliefs and challenge the liberal point of view of their instructors — all part of a more unyielding, confrontational approach that’s much more intense than was seen in Reagan’s political era.

The theme of political persecution ran through the weekend: by the media, college professors and high school teachers, Facebook and Twitter, and fellow students. Talks were held at both the ranch and its conference center, a mission-style building in Santa Barbara that’s about a 40-minute drive from the mountain estate.

Burt Folsom, a frequent YAF speaker and a history professor at Hillsdale College in Michigan, said his profession tends to be liberal. “Often government is an employer of professors, and they tend to see government in a very favorable light — as the solution to problems.”

Early in the conference, when students took turns introducing themselves, many said they were ostracized at school for their conservative beliefs, sharing stories of their experiences.

Caleb Walzak, a 16-year-old sophomore from Savannah, Ga., said he felt out of sync with the rest of his classmates.

“If you say anything that goes against any of their opinions at all, you are shunned from all social interaction whatsoever. Basically your life is ruined,” Caleb said. “Stuff that they believe in is not what America is. Conservative is what American really is.”

Sarah Dowless, a senior from Wakefield, Va., said a feeling of political isolation is one of the reasons why she has attended six Young America’s Foundation conferences.

“I go to a school for the arts. It’s a great place, but it’s very liberal,” said Sarah, 16. She aspires to be a free market economist.

“When I come here, I get to be around people on the same side.”

With its 688 acres of oak and manzanita trees and riding trails hidden in the Santa Ynez Mountains, Reagan’s ranch was a sanctuary from the pressures of the White House.

Marco Singletary, a high school senior from Joliet, Ill., said his interest in Reagan is what led him to the foundation conference in Santa Barbara. A teacher saw him reading “The Reagan Diaries” and suggested he look into the Young America’s Foundation.

Marco, 17, said he gets along fine with his liberal friends, mostly because they don’t talk about politics. He also avoids speaking up in his economics and American history classes, he said, since he’d be inviting trouble.

“You’re literally wasting your breath. People just go based on what they see on Twitter,” he said. “Things have gotten so extreme that the middle ground is too far for either side.”

In recent years, the foundation has drawn attention for its sponsorship of a highly charged circuit of conservative speakers at universities across the country, setting off protests from Cal State L.A. to the University of Buffalo. Foundation officials cite the uproar as evidence of “triggered” liberals suppressing speech.

Last April, the foundation helped line up Ann Coulter to speak about immigration at the University of California, Berkeley, the birthplace of the free speech movement. The resulting outcry by university officials prompted Coulter to cancel her appearance.

Ben Shapiro, one of the foundation’s stars on the college campus speaking circuit, has also been consistently targeted by student protesters, including at Berkeley over the summer.

The foundation, which bought the ranch from the Reagans in 1998, sees it as a cathedral of conservatism, where the former president’s legacy is preserved and future generations are trained in free-market capitalism, individual liberty and the faith-based tenets of the American right.

But the message has changed since Reagan’s day, and the mission isn’t just being carried out at Rancho del Cielo.

The foundation has drawn heated criticism for its speaker circuit at college campuses around the country, enlisting conservative provocateurs such as Coulter, Dinesh D’Souza and author Robert Spencer of Jihad Watch, a website that has often been accused of Islamophobia.

At the Reagan conference center, Spencer told the students that the Quran teaches Muslims to “kill nonbelievers,” and warned that they will be shunned as Islamophobes at school and in the media if they criticized the religious text as the genesis of Islamic terrorism.

The foundation expanded in size and influence over the last two decades after two other activist conservative groups merged into the nonprofit organization: the late William F. Buckley’s Young Americans for Freedom, a cadre of dedicated college-age students once known as the shock troops of the Republican Party, and the right-leaning National Journalism Center.

Fueling the Young America’s Foundation are its prominent backers — and its stuffed war chest.

The foundation reported assets of more than $65 million in 2015 and received more than $34 million in contributions and grants that year, according to Internal Revenue Service records. It spent more than $21 million that year on conferences, salaries, speakers, fundraising and other costs associated with the foundation and ranch.

Donors over the years have included Amway billionaires Richard and Helen DeVos, the in-laws of Education Secretary Betsy DeVos, as well as conservative billionaires Charles and David Koch. Orthodontist Robert Ruhe, who died in 2013, bequeathed $16 million to the Young America’s Foundation.

Reagan himself became a major supporter of the foundation while still in the White House. When Young America’s Foundation took over the ranch in the late 1990s, the former first lady expressed delight over how it would be used.

“We hope that our ranch will be a spark for many bright young Americans in the years ahead,” Nancy Reagan said.