Jerry Ferrara: Steps Out of His Shell 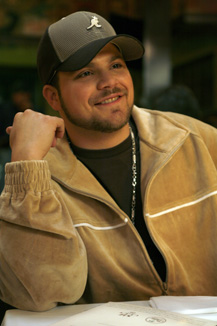 Prodding the boys of “Entourage” for inside information on season three is no simple task. Thankfully, Jerry Ferrara likes to talk.

“The most I can say is Saigon is back this year and Turtle definitely goes at it full speed ahead,” he dishes. “But the music game and the acting game are two very different beefs and the music side of it can be even more cut-throat than the acting side.”

Ferrara's character, Turtle, who mistakenly discovers rapper Saigon at the end of season two, definitely has some tough times ahead. “Let's just say he grows up quick and learns a few valuable lessons that may help him down the line in this music game,” says Ferrara.

He further reveals, “There's one episode in particular that's about midway through the season, it's kind of shocking, I think it will take people by surprise and you get to see how this guy handles it without Vince helping him out or Eric helping him out. He's on his own trying to go at something.”

On his own? But the whole premise of the show is based on what the guys in the entourage do together . Ferrara promises viewers won't be disappointed.

“It's good to see the guys jump away from each other for a little bit cause then you appreciate when they're together even more,” he explains.

Many times Turtle serves as the emotional glue of the group of friends, keeping it real for Vince and just being there for everyone else. So what does Ferrara really have in common with his onscreen persona?

“The loyalty aspect of his relationship with Vince and the guys,” he answers. “I am an extremely loyal person. If I feel that you trust me and I can trust you and you're my good friend, I will go to extreme lengths to show you how much of a friend I will be.”

He continues, “I'd give someone who's close to me the shirt off my back. And Turtle's a little bit street. I was born and raised in Bensenhurst, Brooklyn so I think we definitely share the same street smarts.”

It's those street smarts he would like to see being utilized in future episodes.   “I always love the story lines where [Turtle's] out hustling. Whether it's the music game with Saigon, whether it's getting certain kind of foods from New York shipped out to L.A. on Ari's FedEx account. I just love when he's hustling. The guy's a hustler,” he says.

Like the countless fans of the show, Ferrara too tries to guess what could possibly be down the line for Turtle and the others.

“I think down the line, when I use my own imagination – this is not anything that has been discussed, this is me using my imagination – I see Johnny Drama becoming a major star again. I see how we could show, like if Turtle blows up or if Drama blows up, nothing would change. They would still take care of each other, still be there for each other,” he says sincerely.

“I see the momentum switching at one point from Eric and Vince to Turtle and Drama being the breadwinners and seeing what they would do if they're the man. That's just something I visualize down the road,” he emphasizes. “That is not the story line.”

Ferrara admits that he prefers to leave the story lines to the writers because he is as addicted to the show as anyone. “The fun part about it is not knowing because I am a fan of the show,” he laughs. “Even if I wasn't working on it I would be watching this thing religiously. So when I get scripts I feel honored, like I'm one step ahead of everybody.”

The on set dynamic may be a little different from other television shows. The guys never stop laughing and have so much fun between takes sometimes it's hard for them to concentrate.

“It is such a loose environment. It's hard to work like that because we're having so much fun it's hard to switch into the acting gear and just focus on that,” jokes Ferrara.

But that definitely does not mean it's all play and no work. The crew keeps them in line.

He says “I just want to give a shout out to our crew, we have such a great crew, [they] just have great sense of humors and really enjoy their work. They take pride in the show. It makes you want to work harder because they're breaking their ass so you say to yourself, ‘I can't get left behind, I got to break my ass and match the level that those guys are bringing.'”

In “Entourage,” Turtle's party ambitions are endless and he is constantly urging Vince, Eric and Drama to take advantage of their position in Hollywood. Ferrara is dealing with fame in a completely different manner though, since partying and having his ass kissed are not really his thing.

“That kind of thing just goes with the territory,” he explains. “Now everybody suddenly knows who you are. They want to give you stuff. You get into clubs and you're invited to all the cool parties. That stuff doesn't really faze me. I like to think I'm still the exact same person I was when I was working in a restaurant five years ago.”

He continues, “It definitely has changed the way people act towards me, but for the most part it's just more flattering than anything. People have reacted really well to the show and that's all you ever really want when you're working hard at something. You want people to appreciate your work. You're doing a TV show, you want people to watch it and like it. I just take it in stride. Try to remain very, very humble.”

That doesn't mean this New Yorker doesn't know how to have a good time. Just maybe not in the way most people would think.

“On my time off, I'm all about relaxing. People kinda get disappointed, they expect me to get drunk and smoke weed and go hit on girls with them. I got a girlfriend for a long time,” he says. “I have a really tight group of friends out here. We'll go to my friend's house and have a big barbecue and play wiffel ball. I like to do things that make me feel like I'm a little kid. That's really what I do on my down time. Watch movies, play some sports and just get together with the people I'm close with.”

Well, even if Turtle isn't, Ferrara sounds pretty darn normal to me.