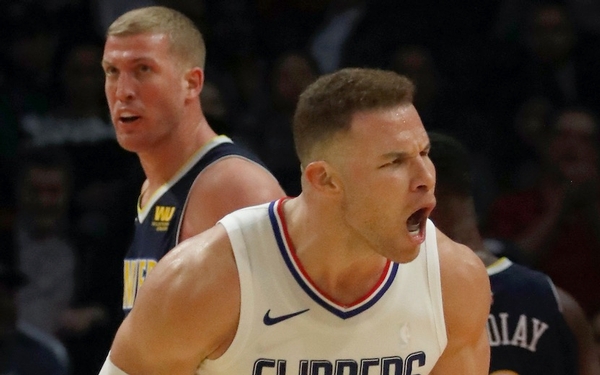 The Los Angeles Clippers' Blake Griffin (32) celebrates after scoring a basket against the Denver Nuggets' Mason Plumlee in the fourth quarter on Wednesday, Jan. 17, 2018, at Staples Center in L.A.

The Los Angeles Clippers, in a trade they believe keeps them competitive and gives them a future with assets and financial flexibility, sent Blake Griffin to the Detroit Pistons for three players and a pair of draft picks on Monday.

The first-round pick is protected if it’s in the top four in 2018, 2019 and 2020, according to one executive, meaning the Pistons would keep it until it falls out of the top four, or until 2021 when the pick is unprotected.

Clippers owner Steve Ballmer was on board with the deal that was spearheaded last week by Lawrence Frank, the Clippers’ president of basketball operations, and that also sent reserve center Willie Reed and seldom-used forward Brice Johnson to the Pistons.

“Blake Griffin had a tremendous impact on this organization and his legacy within the community of Los Angeles will be permanent,” Ballmer said in a statement. “It was a pleasure getting to know and cheer for Blake. I wish him, as well as Brice and Willie, the best of luck.

“While change is hard, my confidence in our front office, led by Lawrence Frank and Michael Winger, along with the sage counsel of Jerry West, has never been higher. I believe today, more than ever, in our ultimate goal of winning an NBA Championship.”

And the Clippers may not be done making deals before the Feb. 8 deadline. Center DeAndre Jordan and high-scoring sixth man Lou Williams could be traded if L.A. can get the draft picks and young players that it desires, according to NBA executives not authorized to speak publicly.

The Clippers have had discussions with Jordan about a contract extension, but the sides have not come to an agreement, according to the executives. The Clippers wanted Jordan, who will earn $22.6 million this season, to use next year’s player option for $24.1 million and then sign an extension. But Jordan has been opposed to doing that.

The Clippers also have had contract talks with Williams, who is making $7 million this season, but again the two sides have not come to an agreement.

The Clippers are expected to continue contract conversations with both Jordan and Williams. One executive said they are looking to improve in both the short and long term. But if they remain outside the playoff picture — they sit a half-game behind Denver for the eighth spot in the West — the Clippers, who have their own first-round pick, could have two lottery selections in this year’s NBA draft.

It’s the end of an era, the most successful in Clippers history, with the exit of Griffin and last summer’s trade of Chris Paul.

Griffin signed a five-year, $171 million extension that summer, but the Clippers have struggled with injuries all season, including to Griffin, who missed 14 games with a knee sprain. Injuries marred Griffin’s nine years in L.A. from the start — a knee fracture wiped out his entire first season, and the 6-10, 250-pound forward failed to finish each of the Clippers’ past two playoff runs, cementing the team’s failure to get past the second round.

The Clippers acquired one of the best perimeter defenders in the NBA in Bradley, who has made the NBA’s All-Defensive team twice and is averaging 15 points a game. Bradley, who was traded to Detroit by Boston last July, spent three years playing for Clippers coach Doc Rivers when he was the Celtics’ coach.

Just 27, he’s in the last year of his deal that pays him $8.8 million and will be an unrestricted free agent this summer.

Harris, 25, averaged a career-high 18.1 points to go with 5.1 rebounds for the Pistons this season. The 6-foot-9, 235-pounder can play both small and power forward.

Marjanovic is a 7-3 center who averaged 5.7 points and 3.5 rebounds in limited action in two years in Detroit. The third-year player from Serbia will earn $5.8 million this season and $9.4 million next season.

The Clippers gained about $1.6 million in payroll space by sending out about $32.2 million in the salaries of Griffin, Reed and Johnson while taking in about $30.6 million in the contracts of Bradley, Harris and Marjanovic.

The Clippers like the financial flexibility they get this summer and after the 2018-19 season, when they’ll have cap space to go after someone such as Golden State’s Klay Thompson, who’ll be an unrestricted free agent.