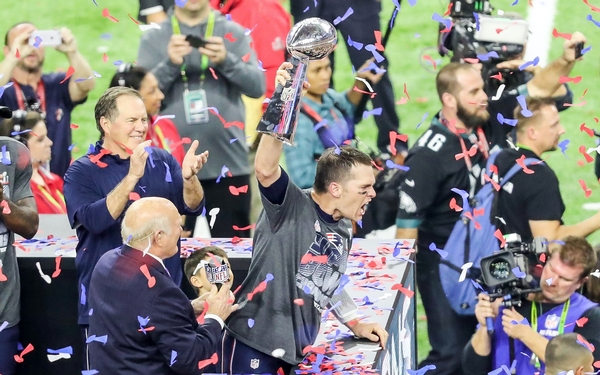 Eighty-one seconds remained in a 17-17 game when Tom Brady got the ball at his 17-yard line with no timeouts in only his third postseason start Feb. 3, 2002. Take a knee? Nope. He completed five of eight passes for 53 yards, and Adam Vinatieri beat the heavily-favored Rams with a 48-yard field goal as time expired. A legend and a dynasty were born.

Joe Namath didn’t reach the Hall of Fame because of his 173 touchdown passes, 220 interceptions and 65.5 passer rating. Broadway Joe got there by symbolizing the AFL’s emergence as an equal to the NFL. He guaranteed the Jets’ upset of the Colts in Super Bowl III in 1969. The second of his two career postseason wins legitimized the AFL and the Super Bowl itself.

The Steelers led Super Bowl XLIII (2009) 10-7 when Cardinals quarterback Kurt Warner threw a slant pass from the 1-yard line with 18 seconds left in the first half. Harrison, a linebacker, intercepted the ball and began the hardest-fought 100-yard return in history. With :00 on the clock, he finally extended the ball to the right pylon while being tackled. I was sitting next to legendary Miami sportswriter Edwin Pope, who calmly said, “That’s the greatest play I have ever seen in the history of the Super Bowl.” Edwin had seen them all.

It sounds ludicrous now, but 30 years ago, Doug Williams spent Super Bowl week fielding questions about being a black quarterback. Denver was leading Washington 10-0 after one quarter in 1988 when Williams posted the best quarter in Super Bowl history. He went 9-for-11 for 228 yards and four TDs.

Lynn Swann isn’t in the Hall of Fame because of his 51 touchdowns and 366 catches. He’s there because of the Super Bowl. The Steelers great had some of the most artistic deep-ball catches in the game’s history, including four balls for 161 yards and a 64-yard touchdown in Super Bowl X in 1976.

Like Swann, John Elway wasn’t a fan favorite to a kid from Cleveland. But hats off. Who can forget the three-time Super Bowl loser taking off for the goal line on third down late in Super Bowl XXXII in 1998? Three Packers blasted him as he spun 360 degrees in midair. He got the first down, the win and retired a year later after winning a second consecutive Super Bowl.

4. What a defensive ending!

The Rams’ “Greatest Show on Turf” needed the greatest clutch tackle in Super Bowl history to preserve a 23-16 win over Tennessee in Super Bowl XXXIV in 2000. Tennessee was at the Rams’ 10-yard line with 10 seconds left. Receiver Kevin Dyson caught the ball at the 3, but linebacker Mike Jones’ open-field tackle dragged Dyson down. Dyson could only reach the ball inside the 1-yard line as time ran out. That was Jones’ last NFL game.

This story from 1989 never gets old. Joe Montana in the huddle pointing out actor John Candy in the crowd during one of the greatest game-winning drives in Super Bowl history. Between whistles, Montana calmly completes eight of nine passes for 97 yards and a 10-yard TD to John Taylor with 34 seconds left to beat Cincinnati 20-16.

In 2007, David Tyree caught four balls as the Giants’ fifth receiver. But he was the David who felled the 18-0 Goliaths from New England in Super Bowl XLII. Trailing 14-10 with less than 90 seconds left, quarterback Eli Manning scrambled out of a certain sack and launched a 32-yard pass that Tyree somehow managed to pin to his helmet while being blanketed by Rodney Harrison. Four plays later, the Patriots were denied their 19-0 season.