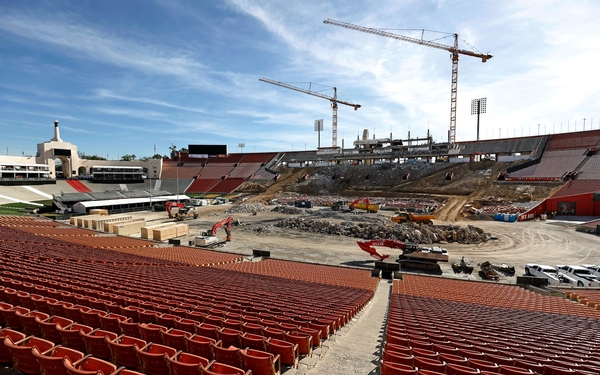 A view of the renovation of the United Airlines Memorial Coliseum in Los Angeles, Calif., on Jan. 29, 2018. (Gary Coronado/Los Angeles Times/TNS)

USC president Max Nikias announced the change — the result of a 16-year, $69 million naming-rights deal — at a groundbreaking ceremony Monday related to the $270 million upgrade of the 95-year-old venue.

“Part of USC’s stewardship in opening the Coliseum included founding sponsors whose support will help us preserve this legendary landmark,” Nikias said.

This is the first time the Coliseum’s naming rights have been sold. The name will officially change in August 2019.

Lynn Swann, USC’s athletic director, said the university’s partnership with United Airlines was critical to funding renovations. “Without their help and support I don’t think we’d be at this particular stage,” he said.

The Coliseum is owned by the state and the city and county of Los Angeles, but is managed and operated by USC, which plays its home football games there.

Swann acknowledged “angst” among Trojans boosters and fans who prefer maintaining tradition over upgrades funded by naming rights to an iconic venue steeped in history.

“If we’re not changing and moving forward then we’re stagnant and other schools will pass us up and we won’t be relevant in terms of our facilities,” Swann said, adding, “There’s a need for change at every step of the way.”

The Coliseum opened in 1923 and has hosted two Olympics — with a third coming in 2028 — two Super Bowls, a World Series and a papal mass.

Along with USC football games, the stadium is temporarily the home of the Los Angeles Rams. The Rams have played at the Coliseum in the two seasons since they returned to Los Angeles, and they will play there the next two seasons as well before their new home in Inglewood opens in 2020.

Trojans football coach Clay Helton has hosted several recruits at the construction site and said the upgrades were important in keeping pace with programs around the country and attracting top prospects.

Among the changes: the seating will be replaced, luxury suites will be added and new lighting and concession stands will be installed.

“When you bring Southern California kids to this arena and when they see what’s going on, whether it’s the new scoreboards, the new seating, the new press box that is going to be created,” Helton said, “It just shows the investment the community and the university is making.”

Said Swann: “We’ll be sold out or closer to sold out every game and that’s going to be a greater experience for the players when they come out of that tunnel.”

Although Monday’s event at the Coliseum was referred to as a groundbreaking ceremony, work at the venue began after the conclusion of the Rams’ season more than three weeks ago.