Amid record heat in Southern California, fears of new drought 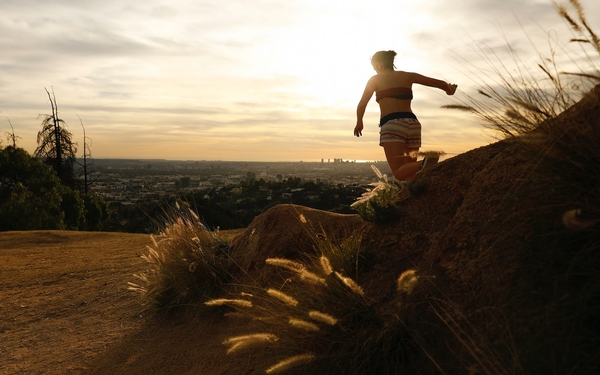 A woman runs in Griffith Park at sunset in above 80 degree temperatures on Monday, Jan. 29, 2018 in Los Angeles. (Christina House/Los Angeles Times/TNS)

But this month is ending on a decidedly hot and dry note, with umbrellas and sweaters giving way to bathing suits and air conditioning.

The region is in the midst of a heat wave that on Monday brought record high temperatures for the day in places such as Long Beach (91 degrees), UCLA (89), Santa Ana (88), Oxnard (87) and Newport Beach (85). At 93 degrees, Lake Forest was the hottest spot in the United States. More records could fall Tuesday, and there is no rain in the foreseeable future.

It’s a repeat of the unusually hot, dry and windy weather that helped fuel huge brush fires in December. Since the end of last February, downtown Los Angeles has seen just 2.26 inches of rain — an anemic amount over an 11-month period. Los Angeles has seen just 28 percent of its average precipitation since October — with most of it coming from the rainstorm that caused the deadly mudslides in Santa Barbara County.

“We’re about halfway through the rain season, so we’ve only got February and March, and they better be a miracle,” said climatologist Bill Patzert. “If they’re not, we just backflipped into the drought again.”

The culprit has been a recurring high-pressure system over the West. “It’s been a hot summer, a hot fall, and even now in the midwinter. We’re talking mid-80s at the end of January? That’s unheard of,” Patzert said.

“The heat today is pretty extraordinary,” added UCLA climate scientist Daniel Swain. “Coastal California is susceptible to midwinter heat spells, but this is a particularly extreme example — to the point where we are breaking records.”

The broiling January is part of what experts call a troubling theme. Last summer was California’s hottest on record. October and November were the hottest in 122 years of record keeping for Southern California.

And L.A. recorded its driest March-through-December period on record, with the paltry 0.69 inches beating out the 1.24 inches that fell during the same 10-month period in 1962.

The extreme heat has been noticeable across California.

“This year, we’re seeing some of these dramatic examples. … When it’s 106 in San Francisco, that gets people’s attention,” Swain said.

The hot and dry weather has come with danger, with Southern California getting an unusually persistent pattern of Santa Ana winds blowing from inland to the coast, raising fire risk. A small brush fire broke out early Monday in Malibu, threatening homes before firefighters were able to knock it down.

Malibu is used to the brush fire danger, but some residents said a January blaze is unusual.

“The fire was right in his backyard. We saw at least three helicopters drop water and there were a few firefighter engines that came on our block,” said resident Brian Rapf, a real estate agent. “If it wasn’t for them, the houses on our street would have burned.”

Rapf said heavy Santa Ana winds helped fuel the fire, but that the dry brush made the situation even more dangerous.

“This time last year, it would have been impossible because the hills were green from all the rain,” he said.

Northern California has fared better than Los Angeles, but there is still cause for concern. San Francisco is at 65 percent of average precipitation and San Jose at 70 percent, with the Bay Area affected by the same mass of high pressure as Southern California, said meteorologist Jan Null.

The snow in the Sierra Nevada, California’s greatest mountain range, has been disappointing compared with last year’s record-breaking season. At Mammoth Mountain, snow has been decent at the highest elevations, but at some lodges the snow was dispiritedly thin.

“Unfortunately, the water content of the January snowpack is only slightly higher than it was in January 2015, while we were in the middle of a crippling statewide drought,” John Leahigh, executive manager of water operations for the State Water Project, said in a statement. “However, we are only halfway through California’s rainy season and have many opportunities to see a significant improvement in conditions.”

The water content in the northern Sierra Nevada snowpack was only 30 percent of normal for this time of year; a year ago, officials recorded it at 182 percent.

“It shows, once again, California’s great variability — it has the greatest weather variability in the country,” said Doug Carlson, spokesman for the California Department of Water Resources. “It’s not encouraging — but it’s nothing to wring your hands over yet.”

A big problem has been the rising temperatures in the Sierra Nevada. Though more storms have come to the north than the south, warmer temperatures have caused precipitation to fall as rain instead of snow.

That means that precipitation can’t be stored as snow in the mountains during the winter and later banked in the reservoirs when it melts in the spring and summer. Right now, the reservoirs are mostly as full as they can be, as they still have leftover surplus from last year’s record season, while still keeping enough empty space available behind the dams should an unexpected flooding event happen.

Carlson said officials are not panicking about the small snowpack, given the time left in the winter, but “all this adds up to keeping a watchful eye to where the rest of the wet season goes.”

The snowpack on average supplies about 30 percent of California’s water demands as it melts in the spring and summer.

Even the storms that have hit the Sierra are nothing like what the region saw last year. “In the Sierra, we had 10 strong ‘atmospheric rivers’ that affected the northern and central Sierra last year,” said Chris Johnston, meteorologist with the National Weather Service’s Reno office. “This year we’ve had very weak atmospheric rivers, and the strongest one was probably back near Thanksgiving.” Even that one was just moderate.

One silver lining for California’s cities and farms is that the reservoir system can help get the state through a dry year. “But we never know what’s coming next year,” Swain said.

And there is no reservoir system for California’s wilderness.

“That has really profound impacts on California’s forest, where there has been tremendous mortality in recent years,” Swain said. The U.S. Forest Service has estimated that more than 102 million drought-stressed and beetle-ravaged trees have died across 7.7 million acres of California forest since 2010 — unprecedented in the recorded history of the Sierra.

“If we see another low snow year, that’s probably going to continue … especially in the southern half of the state,” Swain said.