‘This can’t be the end’: For this Salvadoran family, LA feels like it has always been home 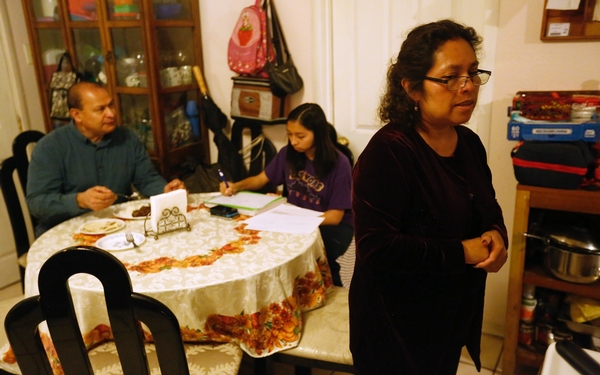 Lorena Zepeda, right, spends a moment with her thoughts while making dinner for her husband Orlando Zepeda, left, and daughter Lizbeth, 12, in their home in South Los Angeles on January 10, 2018.

In the darkest moments, Orlando Zepeda often has found his way.

When he was a teenager in El Salvador and civil war brought bombs and death to his front door, he escaped to the United States.

When he was new to Los Angeles and struggling to earn enough to get by, an American family helped him get a work permit and a job.

This month, when the Trump administration announced it would rescind temporary protected status for more than 260,000 Salvadorans who live in the United States, the father of two remained hopeful, even as he feared for his family.

“This can’t be the end,” said Zepeda, who has lived in L.A. now 33 years, almost twice as long as he lived in El Salvador. “After so many years here, so much work and effort, there has to come something good.”

At stake is a humble but promising life he’s built alongside his wife, Lorena, a Salvadoran also protected by the federal program known as TPS.

There’s Zepeda’s maintenance job at an Alzheimer’s facility, where he recently was named employee of the year.

There’s the duplex in Central-Alameda, now worth nearly double what it was when they bought it 13 years ago.

And there are their two children, who were both born in America.

Benjamin, 14, and Lizbeth, 12, understand that in 20 months — when the Trump administration says TPS for Salvadorans will end — their parents could be deported. They have reacted in different ways.

Benjamin, a high school freshman, spoke out at a news conference after Trump’s Jan. 8 order. He urged people to fight the decision and “believe we still have a chance.”

Lizbeth stays in the background and quietly voices her fear, telling her father, “I don’t want them to separate us.”

Salvadorans living in the United States received temporary protected status in 2001, after two devastating earthquakes in El Salvador. The TPS program allowed them to live and work legally in the U.S., even if they had come into the country without legal permission.

Zepeda, 51, never thought that he and his wife would one day return to El Salvador, even though he understood that TPS clearly was not permanent.

Salvadorans have been the largest group to benefit from the TPS program. In the nearly two decades since they received the protections, they have built careers and opened businesses. They carved a significant niche in construction and housekeeping. And the economy of their home country has come to depend on the money they send back to relatives — $4.5 billion last year.

Administration officials say conditions in El Salvador have improved since the earthquakes and that temporary always meant temporary.

But Salvadorans in the U.S. point to El Salvador’s crushing poverty and high crime rate, and a travel advisory issued by the U.S. State Department this month states: “Reconsider travel to El Salvador due to crime. Violent crime, such as murder, assault, rape, and armed robbery, is common. Gang activity, such as extortion, violent street crime, and narcotics and arms trafficking, is widespread. Local police may lack the resources to respond effectively to serious criminal incidents.”

Zepeda was 17 when guerrillas threatened to make him fight in the war. An aunt borrowed money to smuggle him north.

He crossed the Tijuana border on foot and entered Los Angeles to fireworks on the night of July 4, 1984.

“I thought they were celebrating my arrival,” he said, laughing.

At first, he worked graveyard shifts cleaning restaurants, then got into landscaping. He mowed the lawns of stars including Sylvester Stallone and Madonna. One couple on his lawn care circuit, friends of Ronald Reagan, helped him find an attorney to get a work permit.

When that permit expired in 2001, the TPS program saved him. It also saved Lorena, the young woman he had fallen for in night school English class, who was working in a restaurant kitchen at the time.

Zepeda studied for nine years and eventually earned his GED. He learned about American government and the U.S. Constitution.

“The laws are good,” he said. “But this administration is not doing a fair job applying them.”

The Zepedas know that if they should end up forced to return to El Salvador, they would find a way to survive. They said that they would keep a low profile and try not to fall victim to the gang violence that grips nearly every barrio and village.

A few years ago, gang members killed Lorena’s nephew for refusing to join them. It’s not something the family finds easy to talk about.

“During the war, we had moments of peace in between the gun battles,” Zepeda said. “Now, there’s danger all the time.”

In the coming months, the Zepedas plan to protest and lobby, in Los Angeles and in Washington, D.C. They say they want to do whatever they can to save not just themselves but many thousands of other immigrants whose TPS protections are being rescinded or are threatened — from El Salvador, Haiti, Nicaragua, Honduras.

If there ever might be a time to leave, Lorena and Orlando Zepeda say, it isn’t now, while their children are still getting their educations.

Benjamin wants to be a robotics engineer; Lizbeth, a veterinarian.

Both attend private schools, costing nearly $700 a month. Their books and trophies crowd the bookshelves of the family’s tiny living room.

Near the front door, the Zepedas’ wedding portrait hangs on a wall. The two stand side by side, young and fresh-faced, near Griffith Park, in front of white rose bushes, with Lorena’s train spread wide across the grass.

On a recent weeknight, the family gathered around the dining room table. Lorena served steak, green beans and corn tortillas and Lizbeth plugged away at her science homework.

As Zepeda spoke, he smiled and sounded optimistic.

“These are very difficult times,” he said. “But you know what? I’ve lived through things that were much tougher.”