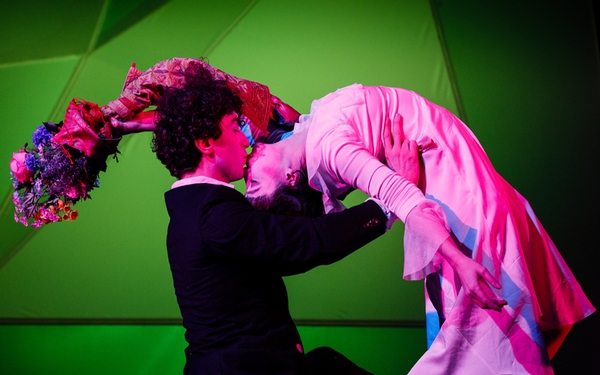 The magical world of artist Marc Chagall and his wife Bella will be tenderly brought to life onstage at the Wallis Annenberg Center for the Performing Arts (The Wallis) next month in director Emma Rice’s production of Daniel Jamieson’s The Flying Lovers of Vitebsk.  Partners in life and on canvas, Marc and Bella are immortalized as the picture of romance. On the painter’s canvas they flew, but in real life they walked through some of the most challenging times in 20th Century history—navigating the devastation of war, the Russian Revolution and each other. Following the artistic heights of Brief Encounter and 946: The Amazing Story of Adolphus Tips, Kneehigh and Rice return to The Wallis with a production that combines the visuals of Chagall’s paintings with the music and dance of the Russian-Jewish tradition. Performances begin February 23 and run through Sunday, March 11, 2018 with opening night set for Saturday, February 24 at 7:30pm. The Flying Lovers of Vitebsk is made possible in part by the generous support of Camille and Arnon Adar. Theater @ The Wallis Series is sponsored by Montage Beverly Hills and Mercedes-Benz of Beverly Hills.

The Flying Lovers of Vitebsk makes its U.S. debut after selling out London’s Globe Theatre, as well as winning the Carol Tambor Best of Edinburgh Festival Award for 2017. Marc Antolin and Daisy Maywood portray Marc and Bella whose journey is underscored throughout with live klezmer music inspired by Russian folk tradition, composed and performed by Ian Ross and James Gow.

“The Flying Lovers of Vitebsk is a beautiful love story,” said Paul Crewes, The Wallis’ Artistic Director. “Emma brings the production to life in her delightfully unique way. It is joyful, sensual, heartbreaking and funny. It is a great to bring the Company back to L.A. with this award-winning production.”

Single tickets are now available for $35 – $125. For more information or to purchase tickets, visit TheWallis.org/Lovers, call 310.746.4000, or stop by in person at the Wallis Annenberg Center for the Performing Arts Ticket Services located at 9390 N. Santa Monica Blvd., Beverly Hills, CA 90210. Ticket prices subject to change.

The Wallis also offers three different options to subscribe to the 2017/18 season: the Premium Subscription Series; the Design-Your-Own option; and the new 3-show Flex Pass for $99, created for busy young professionals—39 and younger—giving the most flexibility to join The Wallis family of subscribers. Learn more at TheWallis.org/Subscribe.

Audiences are invited to enjoy craft cocktails, a handpicked bottle of wine or draft beer at The Briskin Bar @ The Wallis located in the beautiful Jim and Eleanor Randall Grand Hall before and after each performance. Patrons attending evening performances are encouraged to arrive early for Happy Hour featuring special drink prices from 5:30pm – 6:30pm, and all audience members can now enjoy drinks at their seats during the performance.

About The Flying Lovers of Vitebsk:

No one painted love like Marc Chagall. He once said, “In our life there is a single color, as on an artist’s palette, which provides the meaning of life and art. It is the color of love.” On Chagall canvases, couples sweep each other off their feet and up into the air. They soar over cities, arm in arm, leaving the rest of the world behind them. They are, one critic reckons, “a banner to collective love.”

Marc Chagall was a leading pioneer of modern art whose vibrant, original style evolved against one of the most tumultuous and terrifying periods in history. Chagall and his young wife met and fell in love in Vitebsk, Belarus in 1909. Almost immediately they were swept up in the confusion and brutality of world wars, revolution, ethnic persecution and the murder and exile of millions. He responded with a radical original visual style which was both mythic and dreamlike, fusing everyday settings inspired from Vitebsk in an extraordinary mystical lament, conveying love, loss, exile and the miracle of survival.

The Kneehigh and Old Vic production delicately express the way the world weighs us down. As the young lovers, Bella and Marc’s toes hardly touch the ground. They’re the color in each other’s lives—vivid pink and bright green as, bit by bit, the two become one. His ambition and art, however, pulled them apart. Bella, a writer in her own right, sinks into motherhood at home and the violent upheaval around them turns the world grey.

In telling the story of Chagall’s love for Bella Rosenfeld, whom he pictured flying with him above wooden shtetl roofs, the show captures a breathless soaring. It also recovers the almost forgotten voice of Bella, dead from a viral infection in her 50s. Her work as a writer was in her lifetime overshadowed by her husband’s. Playwright Jamieson draws on her vivid reimaginings. And focused in this apparently whimsical pair is half the story of the 20th century. World war, the Russian revolution and pogroms.