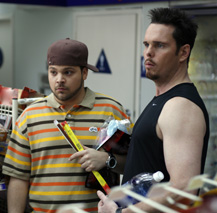 An insider's view of the chaotic world of show business, HBO's “Entourage” was an immediate hit with viewers. The show follows Vincent Chase, a sexy young Hollywood star whose career is getting really hot, and his entourage which includes his washed-up actor brother Johnny “Drama” and his hometown best friends Eric and Turtle.

As Vince's popularity gains momentum, his buddies tag along for the ride. Their crazy adventures include visits to all the hot spots in L.A. and encounters with some of the brightest young stars in Hollywood.

Vince's agent, Ari Gold, is a high-powered, fast-talking, truth-bending schmoozer whom the boys don't really like personally but respect professionally.

The first season follows the boys as they adjust to life in the very fast lane of Hollywood and get used to the unlimited perks of being a young, hot and rich movie star.

The adventure continues as the guys return to Los Angeles from shooting Queens Boulevard in New York and are ready to take the West Coast by storm once again.

This time around Eric may have found love in the form of Sloan, Ari's boss' beautiful daughter, as the other guys continue to acquire and dispose of women like usual.

Vince signs on to do a huge blockbuster, Aquaman , directed by James Cameron. The film causes friction in his life though when he agrees to allow the casting of Mandy Moore, his ex-flame, as Aquagirl.

Drama gets his moment to shine at the San Diego comic convention ComiCon, where he has a paying gig to sign autographs as his former character from “Viking Quest.”

Turtle discovers what may be his chance at success when he hears a demo tape for local hip-hop artist Saigon. Turtle decides to seize the opportunity and sign Saigon even though he has no record label.

Ari attempts to start up his own talent agency and goes behind the boss' back to recruit his fellow agents. After being outed to the boss he gets fired and finds himself with no office and no clients, except for loyal Vince that is.

HBO's hit show “Entourage” is gearing up to have the best season yet, which is no small feat as most of the psychotically-loyal fan base will tell you.

In the third season Vince has wrapped the shooting of James Cameron's big budget Aquaman and everyone has high hopes that it will tear up the box office. Vince's entourage will continue to party it up in L.A. and keep savoring their cash cow.

Vince will continue to count on Eric, Drama and Turtle to support him in his career and keep him grounded in his life. The boys will happily continue to torture Ari, Vince's high-powered Hollywood agent, and Shauna, his smooth-talking publicist.

With a fresh crop of guest stars the adventures are sure to continue into the third season as the boys visit new hot spots, bed new beauties and cause all sorts of mischief.