At the ‘Black Panther’ premiere, representation is everything 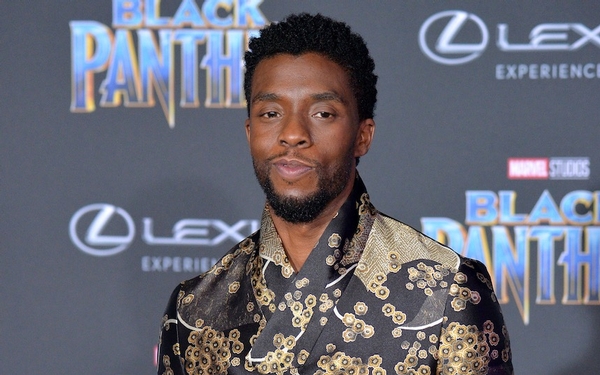 The royal purple carpet at Monday night’s world premiere of “Black Panther” was awash in gem tones and African-inspired prints as those privileged to catch the film early adhered to Disney’s “royal attire” dress code.

The lavish event staged on Hollywood Boulevard outside the Dolby Theatre, where the film bowed, took its cues from the movie’s hero — King T’Challa (Chadwick Boseman), ruler of the fictional African country of Wakanda, who also masquerades as the tech-forward superhero Black Panther.

Just over two weeks ahead of the film’s wide release on Feb. 16, the cast and other members of the Marvel Cinematic Universe took to the carpet to muse about the importance of representation, and why this film couldn’t have come at a better time.

“We’re now finally having the opportunity to see heroes that look, sound and feel like us,” agreed Cheo Hodari Coker, executive producer of Netflix’s “Marvel’s Luke Cage.” “Growing up, I always loved [’Star Wars’ hero] Luke Skywalker, I always loved Han Solo, but there was always a disconnect because I knew that I could never really be them.

“And from a standpoint of pride, it’s [palpable],” he continued. “There’s something about it that I think is special. To see this kind of story be told with a real budget and our superstars I think is going to be an amazing experience.”

Among those superstar cast members, Oscar nominated icon Angela Bassett, who plays T’Challa’s mother in the film, and newly minted Oscar nominee Daniel Kaluuya (who plays W’Kabi) also weighed in on the significance of seeing oneself reflected onscreen.

“I brought my kids here tonight because I want them to see it,” said Bassett. “Tonight, to see all of this brilliance not only with T’Challa but with his brilliant sister Shiuri [played by breakout actress Letitia Wright] — all of that is inspiration for these kids.”

Laura Harrier, who played Peter Parker’s love interest Liz in last year’s “Spider-Man: Homecoming,” is also happy to both see and be a part of the newfound inclusion in superhero blockbusters.

“That’s what’s been so cool about Marvel right now,” she said. “There weren’t love interests in Spider-Man movies that looked like me until there was me. There weren’t black superheroes [onscreen] until right now. It’s amazing that things are changing and we’re starting to see films reflect modern times.”

On whether she could imagine a Spider-Man/Black Panther crossover in the future, Harrier’s fingers are crossed.

“I hope so and I hope I’m in it. I’d like to see them teaming up, beating the bad guys. Hopefully Liz makes a cameo and she’s in Wakanda too,” she said with a laugh. “Maybe they’ll adopt me, I don’t know.”

Mike Colter, who plays Luke Cage in the Netflix series, would also like to see a crossover in the future. Or at least access to T’Challa’s wardrobe.

“Give me something that when you shoot it, it leaves no holes so I don’t have to change my clothes,” he said. “I know I’m bulletproof, but I want a suit for practical purposes. That’s all I’m asking for.”

Just as long as Luke and T’Challa don’t butt heads.

“If I catch him out of his suit, he’s done,” said Colter.

Florence Kasumba, whose “Black Panther” character Ayo first appeared in “Captain America: Civil War” admitted that she has never seen a superhero that has looked like her until recently.

“The first time I saw a superhero like me?” she said. “I think when I watched ‘Civil War!’”

Bassett first saw herself reflected onscreen through Halle Berry’s Storm in the “X-Men” films. “But [’Star Trek’ communications officer] Lieutenant Uhura [played by Nichelle Nichols] was a superhero to us,” she said. “Conquering space! She was a superhero.”

For Coker, his first brush with a supe was closer to home.

“My grandfather was a Tuskegee Airman that flew in with the 100th Fighter Squadron,” he said. “So I grew up seeing black men doing things that no one else thought they could and it inspired me to do the same thing.”

Though representation among the superhero canon is certainly long overdue, it would be remiss to attribute T’Challa’s popularity solely to his skin color. Clark Gregg, who played S.H.I.E.L.D. agent Phil Coulson in the “Iron Man” films and now on ABC’s “Agents of S.H.I.E.L.D.” agrees that the Black Panther is so much more.

“I’ve gotten to watch all these different chapters play out,” he said. “And yet when I was a kid in the ’70s reading these comics … when we saw Black Panther, it was different. At that time, a lot of the characters that African Americans were playing on TV were pimps. And to see this guy that was a king who went to Oxford, who ruled this country and was magnificent … my friends and I really freaked out about this.

“I’m geeking out tonight,” Gregg continued. “This is a very different part of the world and everything about it looks very special.”