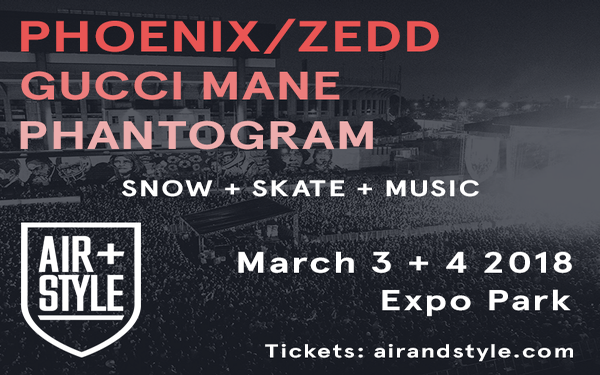 For the first time in LA, Air + Style will include skateboarding as part of the program. The new course will feature fast, high-flying skateboarding by the world's best skaters on a transition based concrete skatepark, inspired by America's best DIY parks. This year’s snowboard offering in collaboration with Big Bear Mountain Resort, will showcase urban snowboarding, switching it up from last year’s big air jump and instead showcase the world’s best snowboarders competing on a rideable snow covered street scene. The Swatch Best Trick contests for both sports will feature live musical performances on the course to fuel the sessions. Festival founder Shaun White who recently won a gold medal at the 2018 Olympics in South Korea says “I can’t wait to come home from the energy of the Olympics to Air + Style Los Angeles. The festival is a combination of all my passions sport, music, art and culture and the fact it happens in my home state of California and in Downtown LA, makes it even more special.”

Zedd, Phoenix, Gucci Mane, Cashmere Cat, Cut Copy, DRAM, GRiZ, Mura Masa, Phantogram, Tinashe, Washed Out, BADBADNOTGOOD and more will join the stacked bill of 20 bands performing on two stages. Air + Style will deliver both an elite snowboard and skateboard competition throughout the two-day event, where some of the world’s most revered athletes will compete including professional skateboarders.

Hansen’s Natural Sodas is bringing art to Air + Style for the second year in a row! Check out some live painting at Hansen's House by acclaimed street artists Vyal Reyes, Ricky Watts, and Spencer "MAR" Guilburt.

This year the festival is also pleased to offer a dynamic food program for patrons including local celebrity chef Roy Choi (LocoL, Chego, Kogi) who will be helping to curate a mouth-watering food lineup, and is bringing with him a few L.A. dining staples.

Air + Style Los Angeles is family-friendly event that welcomes music and action sports fans of all ages. Children 10-years-old and younger will be admitted free of charge with a ticket-holding adult.

Fans can purchase tickets and sign up for the Air + Style email-list to be the first to receive new information at AirandStyle.com.

Air + Style is a global snowboard and skateboard competition and music festival that features world-class action sports athletes and musicians along with art, community, wellness, food, art and culture during a two-day event series with stops around the world including Beijing (Nov 24 + 25 2017), Australia (August 3, 4 + 5 2018) and Los Angeles, California (March 3 + 4).

Events
#CWABG's "How Are We Curators of the Black American Experience Now?" on 3/25 at 7PM
179 views