A heroic, surprising portrait of Gloria Allred in the admiring documentary ‘Seeing Allred’ 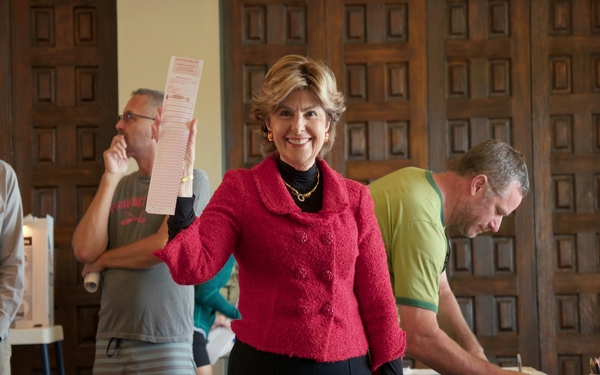 The woman’s tone is calm, measured, decisive, someone who knows what she thinks and no longer cares — if she ever did — what those on the other side may believe.

“I live in a war zone every day,” she says. “There is a war on women. It’s real, it can be very ugly. Women depend on me to be strong, to be fearless, to assertively protect their rights.”

If you live in Los Angeles and pay attention to the media, you won’t need many guesses to figure out that the speaker is Gloria Allred.

A tireless advocate and a zealot for good causes, the celebrated attorney gets a sympathetic, admiring portrait in “Seeing Allred,” a documentary directed by Sophie Sartain and Roberta Grossman.

Made with its subject’s cooperation and talking to people like comrade in arms Gloria Steinem and Allred’s daughter, fellow attorney Lisa Bloom, the film allows us, at least to a certain extent, to get behind the public persona to the private person.

So when Allred says “it’s always personal to me if a woman has been a victim of injustice” and adds later “my work is my life, it’s who I am, it’s my identity,” we get to see the experiences that shaped that point of view.

An attorney who understands the value of publicity, Allred has been involved in a wide variety of cases that caught the public eye, including protesting drug store chain Sav-On’s practice of having separate aisles for girls’ and boys’ toys and the way the pricey Los Angeles restaurant L’Orangerie had special menus for women that did not include prices.

One of Allred’s most recent crusades, her support of the increasing number of women who have come forth accusing Bill Cosby of sexual attacks, is used as a throughline in the film and as an example of her famous tenacity.

Allred began by shadowing the comic at his concert appearances, noting “holding someone accountable is a form of justice.” Once it became clear that many of the accusations involved acts too old for legal action, she spearheaded an effort to end the statute of limitations for similar crimes in the future.

When Allred talks about some of the darker incidents in her personal past, we get a sense of what has forged her steely determination.

On vacation in Mexico in 1966, Allred was raped at gunpoint. That led to a pregnancy and a botched backroom abortion that nearly cost her her life, stories that are shocking to hear.

The mental toughness surviving those experiences demanded at times led to inflexibility. One of Allred’s oldest friends, high school classmate Fern Caplan, reports that a political dispute between the two led to no communication for seven years.

Though we periodically hear from cranks insisting Allred is “a shrill feminist attorney,” one of the flaws of the documentary is that we don’t hear from anyone sane offering both pros and cons on her highly public career.

Also, the film touches only lightly, perhaps because it happened so recently, on her rift with daughter Bloom over the latter’s brief time as one of Harvey Weinstein’s attorneys.

For Allred herself, everything feels irrelevant in the face of the demands of her ongoing battle. “The fight has just begun” is the last thing she says on camera, and there can be no doubt that she means it.