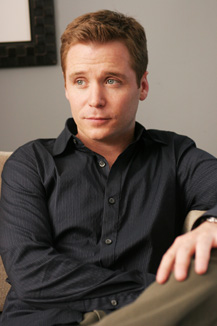 Eric may be all business as Vincent Chase's manager on “Entourage,” but actor Kevin Connolly admits he's not that serious. “I think I'm a little bit more fun in real life than Eric is,” he laughs.

What he does have in common with his character is their savvy business sense. Although Connolly likes to think he's a bit tougher than the pizza boy from Queens.

Since joining the cast of “Entourage,” Connolly can't stop being grateful for his job. And come on, who wouldn't want to be a part of that fun group? “Honestly, I've never been so happy in my life,” he gushes. “It's been amazing, it's really changed my entire life in every capacity.”

The casual and laid-back Connolly explains how fortunate he and the rest of the cast feel just having the opportunity to be a part of “Entourage.” “I'm just trying to enjoy it the best I can while it's here.”

Surely one of the perks is never waiting in line at a club, never needing reservations at the hottest restaurants and getting the royal treatment pretty much everywhere you go in L.A.

Connolly modestly agrees that, “when you're on a TV series that people like that kind of thing always happens.” Isn't that nice? But the perks are not what he finds most valuable. He says, “Being able to go to work everyday – that's the best part of it.”

Does he still go out clubbing though? “Of course I do! I go out to clubs and that kind of thing,” he admits. “Everybody does. We work hard and play hard.”

And the fantastic thing is that the boys all play nice together, unlike so many celebrity rifts we hear about on-set these days. Connolly says the group of them hangs out “All the time. We're a tight-knit group.”

But this talented actor has more things to do than party on his time off. He's a bona fide director. “I just directed, on my hiatus, I directed my first feature film.” If that doesn't impress you nothing will.

He adds, “I had actually been working on it before I got ‘Entourage' and ‘Entourage' just sort of slowed down the process. But I was able to do it on my last hiatus.”

Keep an eye out for him at Sundance, where he will hopefully be showcasing his directorial debut.

Long set hours, crazy Hollywood party nights, and he still finds time to direct features? But Connolly does admit that each season the shooting gets easier as everybody gets more comfortable with their parts.

“It's sort of a well oiled machine at this point so I think that it's a little less stressful now than it was, say, in the first/second season,” he explains. “But we're having a great time. As hard as the work is I think everybody is really enjoying themselves. It's as much fun as you could possibly have at work. It's the greatest job that anybody could ever have.”

With all the witty back-and-forth that the viewers get to see in each episode looking so natural, some wonder how much of that banter is written on the page and how much just comes out of the guys' mouths.

“It's scripted pretty tightly,” explains Connolly. “I personally have never been a big improv guy. The script is tight and it's written so well that I never really feel the need to improvise.”

He continues, “Sometimes improvising can dirty it up a little bit; not keep it as fresh and clean. Jeremy Piven is one to improvise. But he's got that down cold, he's a theater actor from Chicago so he's well trained in that sort of improv school. For the most part, speaking for myself, I keep it to the script.”

In future episodes Connolly says he would like to see more girls ... shocking, right? “I like the girlfriend story lines,” he says. “It's good to be able to do scenes outside of the group of the guys. Those scenes are always great but for me I like to step out and explore that side of my character as well.”

Connolly says he likes having Sloan around and, although he couldn't divulge the specifics, he did say “[There are] some good Sloan story lines this season.”

Everybody knows that “Entourage” is famous for making some select Hollywood hot spots morph into household names and the guys relish in the fact that they have the freedom to give producers suggestions as to which places to spotlight.

“I'll mention to the producers if I feel like there's a club that's kind of on the rise or something,” says Connolly. “I'll mention it in passing to the producer. They have a pretty good sense of what it is they want – from a location standpoint. I always put my two cents in.”

With all of the excitement building up for the third season one can't help but wonder what all of the fans would do with their Sunday nights if the show were to end. One thing is for sure, these guys don't ever want that to happen.

“I would love to do it forever and ever and ever. I would like to be the old man ‘Entourage,' 60-years-old and gray and chasing girls in clubs,” laughs Connolly. “It's such a great show and its such a great gig, as long as they'll have us and people will have us, I'll be there.”

As of now there is no shortage of rabid “Entourage” junkies and with no changes in the foreseeable future, these guys should be around for quite a while. And that ought to make everyone very happy, especially Connolly who says of him and his boys, “We're the luckiest guys in the world.”