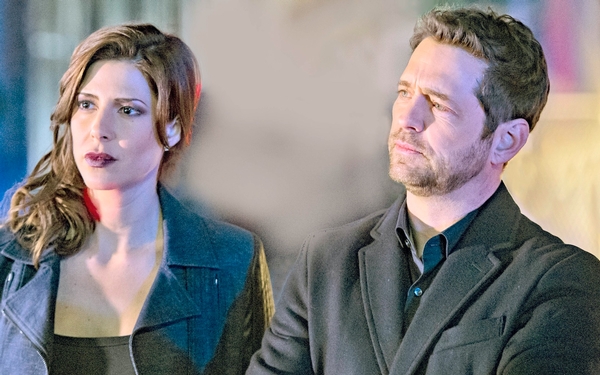 Actor Jason Priestley used to be an adrenaline junkie, but his big risks these days involve trying things he’s never done before.

“If I’m scared of a project, I take it,” he says, plopping on a leather-backed chair in a hotel meeting room.

“If all you do is play it safe all your life, you never learn what you’re capable of. But you also never force yourself to get better or to learn.”

Looking at him today, it’s easy to remember that Priestley jettisoned to fame as the good-guy Brandon Walsh in “Beverly Hills, 90210.”

The role hoisted him to teen-idol status. But he wasn’t one to relish that too long. Since then he’s been a race car driver, a downhill skier, a director of considerable standing, an on-the-job producer, an author, and, of course, the star of shows like “Call Me Fitz,” “Haven” and his new detective thriller, “Private Eyes,” airing on Ion Television.

At 48, Priestley is a seasoned veteran of show biz. He doesn’t choose an acting part casually. And his role as the ex-hockey player-turned-private investigator in “Private Eyes,” boasts a piquant amount of humor and grit for him to say yes to three seasons.

While Priestley loves overcoming obstacles, one of them — negotiating a fleeting race car down the speedway — landed him in the hospital for three months. “I broke my back, broke both my feet, ripped my nose off my face, had to have this part of my skull rebuilt,” he says, patting his temple.

“I’d had plenty of people close to me die, but I just never thought it was going to happen to me.”

He quit racing a year and half later. “I just had to get back in the car a couple of times,” he says. “It was time (to quit). There’s an old saying in racing: ‘It’s time to walk away when you still CAN walk away.’”

The father of a girl, 10, and a boy, 8, Priestley confides that he aims to spend more time with the family. Today, in fact, he’s driving his son to Bakersfield, Calif. where his boy is taking part in a gymnastics contest. Both children are in gymnastics, he says.

The Canadian-born actor is also passionate about directing. “I do spend so much of my life behind the camera these days, and I seem to enjoy that more — to be perfectly honest, oddly enough,” he says.

“It’s a strange thing because the jobs are so incredibly different. And I still do find my work as an actor to be enjoyable and rewarding. But I find that the challenges that I’m constantly faced with as a director are bigger, and they require more complex solutions. Therefore when I am able to overcome those challenges, I find that to be more fulfilling.”

He admits there have been times when he became disillusioned with his chosen field. “But I also feel like it’s important to not let yourself become jaded by the industry,” he says.

“And I think it’s very easy, certainly later in life and later in your career as I am now, to become jaded by this business because at the end of the day, it’s a business. And people make business decisions. And it’s easy to become bitter and jaded,” he says.

“And I think it’s important to remember your artistic roots and what it was that made you want to become an artist in the first place, and to hold on to that sense of wonder and to remain inspired by it. And so I’ve worked very hard to remain on that side of the fence. I try to surround myself and work with people who are like-minded and who haven’t become too jaded by the process and who are still motivated by the magic. The reality is there’s still some magic in what we do. And I think if you look for that magic and try to create that wonder for a younger generation, I think you can still do it.”

It turns out Katherine Heigl is a huge fan of USA’s “Suits” and will join the cast later this year. Heigl will play a new partner at the law firm, destined to be the staff’s greatest ally or their greatest threat. Heigl says she first became interested in acting because of the stories. “I really gravitate toward stories that on a human level are relatable, or touch on something, or help you feel not quite so alone, or something you’re going through, or something you’ve experienced, or help other people realize we’re not islands,” she says.

“We are all connected in one way or another. And we need to show compassion and empathy. I gravitate toward more positive message stories. Now I sound like I should be on the Hallmark Channel, which I also love,” she says, laughing.

Filming on the latest season of “Suits” begins in April in Toronto.

The last known existing set from the classic film “Casablanca” is still there on the Warner Bros. lot. Visitors may take advantage of this on Valentine’s Day when they can pose in front of the “Casablanca” movie facade for a keepsake photo. The Warner Bros. Studio Tour Hollywood (which is NOT in Hollywood but in Burbank) offers tourists the chance to glance some behind-the-scenes views of currents shows as well as sites from old movies. Tickets may be ordered online at www.wbstudiotour.com or by calling (818) 977-8687. Tours run Monday through Sunday from 8:30 a.m. to 3:30 p.m. and depart every 30 minutes. Tickets online run $65 for adults and $55 for kids over 8. On site prices are $68 for adults and $58 for kids over 8. Now through March 4 locals get a price break with an entry fee of $49.99.

It’s a Hollywood custom that once you’re an established actor, you don’t have to audition anymore. But Henry Winkler is an exception. Winkler is co-starring in HBO’s new black comedy “Barry,” premiering March 25. And the famous “Fonz” auditioned for the role. “The thing is today, because the executives turn over so quickly, you have to audition a lot,” he says.

“There are a lot of actors who say, ‘Oh, they know my work. Here, send in my tape.’ But these young people don’t trust, necessarily, that you can do what they need you to do because their jobs are so tenuous. So you want the job. I would go to auditions and sit in those metal chairs, and the young actors would say, ‘What are you doing here?’ I’d say, ‘I’m looking for a job. You?’”