7 former Olympic cities you should visit 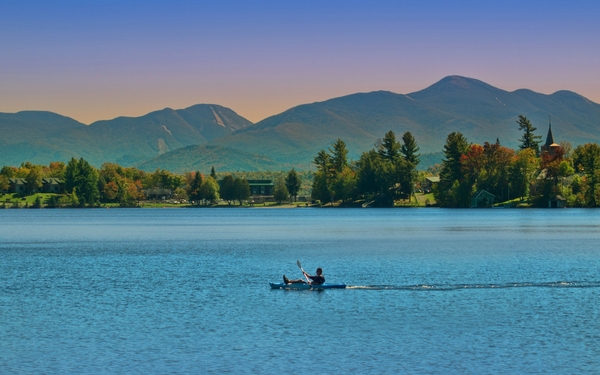 Lake Placid, N.Y., a cozy village in the Adirondack Mountains, has hosted the Winter Games twice: in 1980 and 1932. (Dreamstime)

With the 2018 PyeongChang Winter Olympic Games, we’ve been thinking about past Olympics: the retro logos, the athletes’ classic uniforms, the spectacular venues and of course, the incredible moments. Admittedly, recent doping scandals and commercialization have made the Games a bit less palatable. However, the pitfalls of modern sport shouldn’t overshadow what was once simply an incredible display of pure athleticism, sportsmanship and spectatorship.

What’s more, a look back throughout Olympic history reveals a slew of host cities that are enticing destinations in their own right. Some of these places allow travelers to explore and use historic venues graced by some of the world’s greatest athletes. Other former stadiums, Olympic Villages and feats of architecture built for the Games have been remade into attractions for the public. From the snowy Alpine resorts of St. Moritz to the flashy London Aquatics Centre to an alarmingly angled tower with views over Montreal, there’s no shortage of eye candy in former Olympic cities around the globe. Here are seven of our favorites.

This cozy village in the Adirondack Mountains has hosted the Winter Games twice: in 1980 and 1932. During the 1932 Games, women’s speed skating made its Olympic debut, and Norwegian figure skater Sonja Henie wowed crowds with a routine that elevated the sport to another level and earned her gold. The 1980 Games are known for the U.S. ice hockey team’s famed Miracle on Ice, which ended the Soviet team’s three-decade domination of the sport.

Today, Lake Placid is a bustling place that draws vacationers year-round to its scenic mountainous setting. Travelers can visit — and in some cases use — former Olympic sites, including the ski jumping complex, the cross-country skiing center, the bobsled run and the ice hockey rink. Skiing and snowboarding at Whiteface Mountain, which offers the greatest vertical drop east of the Rocky Mountains, are big draws as well. In the summertime, visitors can stroll through the village, which sits beside Mirror Lake, hitting the shops and restaurants and swimming and boating out on the water.

Helsinki hosted the Summer Games in 1952, which saw Israel and the Soviet Union competing in their first Olympics. Any Cold War tensions present at the Games’ outset disappeared as the athletes showed their stuff. The Soviet women’s gymnastics team trounced the competition, setting the stage for 40 more years of Olympic domination. Czech long-distance runner Emil Zatopek won three events — the 5,000- and 10,000-meter races and the marathon — a triple-gold feat that has yet to be replicated.

The city’s functionalist-style Olympic stadium was designed by architects Yrjö Lindegren and Toivo Jäntti in 1938. Standing 235 feet tall, it offers incredible views over the city. The stadium, which still hosts sporting and cultural events, will be closed until 2019 for renovations. Fortunately, the city is filled with other iconic buildings, like the Eliel Saarinen-designed Helsinki Central Station. Other architectural highlights include the neo-Renaissance Hotel Kamp with its hall of mirrors, and Kappeli restaurant, a favorite of artists and writers in the late 19th and early 20th centuries. The lively Design District also offers dozens of shops, galleries and museums. Keep an eye out for the Jugend-style buildings and open studios where artists and travelers mingle.

One of the most memorable moments in recent Olympic history happened in Turin in 2006. During the cross-country skiing team sprint competition, Canadian Sara Renner broke one of her ski poles. In a display of true Olympic sportsmanship, Norwegian head coach Bjørnar Håkensmoen ran out from the sidelines to lend Renner a spare pole. The Canadians went on to win silver and Norway did not earn a medal, but Håkensmoen received a sweet gift for his gesture: 7,400 cans of Canadian maple syrup, donated by Canadian fans.

At the time, Turin was also the biggest city to ever host the Winter Games. Travelers can still attend sports competitions and other live entertainment at the Torino Olympic Park. The former Olympic Villages, located 90 minutes outside of the city in the alpine mountain resorts of Bardonecchia and Sestriere, now welcome travelers and are underrated downhill skiing destinations. In the city itself, creative arts and cuisine are thriving. Visitors can take in galleries and artist studios in the Barriera di Milano historic quarter. And, along with the butter-laden traditional cuisine of Piemonte, Turin’s artisan coffee shops, wine bars and street food from around the world are worth checking out.

Three women’s sports — basketball, rowing and team handball — debuted at the 1976 Olympics in Montreal. But the star of the Games was a gymnast, Romanian Nadia Comaneci. Just 14 years old, she charmed crowds while earning the first-ever perfect score of 10.0 in gymnastics, on the uneven bars. Runner Ed Moses was another young athlete to make a splash in Montreal. The 20-year-old broke the world record in the 400-meter hurdles, and went on to dominate the event for years.

Today, the city pays tribute to its hosting duties with Since 1976, a permanent exhibition in the Montreal Tower of Parc Olympique, the original Olympic Park. The exhibit combines historic photos and artifacts with archived video footage and interactive features that also showcase how the building has changed over the years. The Tower alone is worth a visit. At 540 feet high with a 45-degree angle, it’s the world’s tallest inclined tower and features spectacular panoramic views of the city, including the Olympic Park. Of course, Montreal’s Old World feel, global food scene and culture — specifically its eclectic music offerings — are likewise impressive.

This resort town in the Swiss Alps is one of seven cities to have hosted the Olympics more than once. It was here, during the 1928 Winter Games, that the skeleton event debuted. It’s a harrowing sport, in which competitors race downhill on narrow sleds. Races were held on Cresta Run, a now legendary natural ice track extending three-quarters of a mile, from St. Moritz to the village of Celerina. The world’s only natural ice track, it has been around since the 1870s and is rebuilt each winter. Today, visitors — only men ages 18 and older — can try it out for themselves using toboggans provided by the St. Moritz Tobogganing Club. Visitors can also catch daily bobsled taxi rides after watching training sessions or races.

Olympic buildings are also on display here. The bubble-shaped Chesa Futura, perched on a slope overlooking St. Moritz, was used during both Winter Games. Travelers can catch a glimpse of the building on a tour of St. Moritz architecture that also includes the 1905-built Olympic Ice Pavilion (still open to casual skaters) and the Olympic stadium building used in both 1928 and 1948. Set beside Kulm golf course, which is open in the summer, the stadium building was restored by artist Rolf Sachs, who now lives there amid Olympics memorabilia.

The first time London hosted the Olympics, in 1908, it was something of a fluke. Rome had been tapped for the event, but when the city wasn’t ready in time, London stepped up. The Games were memorable in part for the sportsmanship on display: A wrestling final was postponed for a day to allow a competitor to recover from an injury; an Italian marathoner who collapsed in the stadium was helped across the finish line by officials, disqualifying him but cementing his place in the hearts of fans. London hosted again in 1948, again on short notice due to World War II, but the city pulled it off. These were the first Olympic Games to be broadcast on home TVs, and to feature starting blocks in sprint races.

But venues from the 2012 London Games have had the most profound effect on the city, for better or worse. From the outset of its bid, London emphasized the economic revitalization that would come with hosting and insisted venues would be incorporated back into everyday life. Not everyone is pleased with the result. But for travelers, there are now a host of new sports and activities to enjoy at Olympic Park. Free to visitors every day, the park is home to the striking ArcelorMittal Orbit sculpture, featuring the longest tunnel slide in the world. The park also offers an urban beach and several Olympic Games venues, such as the London Aquatics Centre and the Lee Valley VeloPark, all open for public use.

Lillehammer welcomed the Winter Games in 1994. The Bosnian War was ongoing at the time, but the Olympics offered a hopeful sign: the Bosnia and Herzegovina four-man bobsled team brought together a Serbian, a Croatian and two Bosnians. Other standout moments included American speed skater Bonnie Blair’s historic third-consecutive gold medal in the 500-meter race. Norwegian speed skater Johann Olav Koss also cruised to three gold medals, setting a world record in each race. And the Games also featured a spectacular finish in the men’s cross-country 4x10-kilometer relay, when Norway lost to Italy by a ski length — it was dramatic enough for NBC to create a feature film, “The Great Race,” about it.

Today, travelers can experience some of the magic of the Lillehammer Olympics — and the photo-finish relay — on some of the same cross-country trails used by Olympians. With 211 miles of marked cross-country trails between Lillehammer and Hafjell, a resort 15 minutes away, there’s plenty of space for exploring the forested hills and countryside of Norway. Other can’t-miss Olympic venues include the bobsleigh and luge track — open for rides — and the Lysgårdsbakkene Ski Jumping Arena and its amazing views (after a 954-step climb).