‘Elvis Presley: The Searcher,’ the companion album to new HBO documentary, due April 6 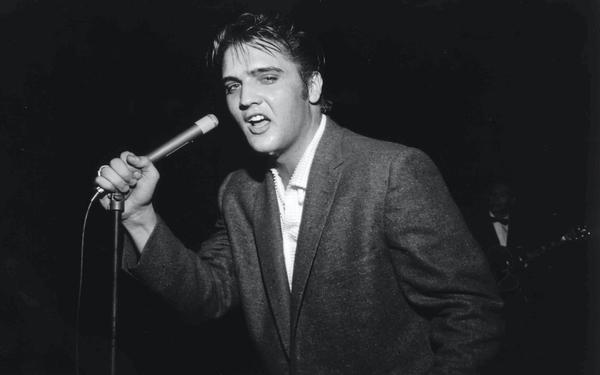 Elvis Presley performs in Bob Neal's Cotton Picking Jamboree for more than 7,000 people on May 15, 1956 at Ellis Auditorium in Memphis, Tenn. (The Commercial Appeal/Zuma Press/TNS)

HBO’s forthcoming documentary “Elvis Presley: The Searcher” largely sidesteps the rock star’s status as a pop culture icon in favor of highlighting his artistic ambitions, a take that has prompted his record label to assemble a companion soundtrack album that similarly favors his most creative recordings over his signature hits.

“Elvis Presley: The Searcher (The Original Soundtrack)” is set for release April 6 by Sony Legacy, just ahead of the April 14 premiere of the documentary directed by Thom Zimny, perhaps best known for his longtime video collaborations with Bruce Springsteen.

The album will be released in several configurations: a single CD, a double LP vinyl set and perhaps most significantly, a three-CD deluxe box set.

The latter version spans his earliest recordings at Sun Studio in Memphis, such as “That’s All Right” and “My Baby Left Me,” through song choices that reveal his questing nature that often was obscured by his fame as well as by his detour into Hollywood and, later, Las Vegas.

“In this collection, one gets not a greatest hits package but a song-by-song, curated portrait of an artist,” musician-turned-author Warren Zanes writes in the book with the deluxe edition, “an artist who very consistently and courageously gave himself to his performances, as if in the giving he might find some missing part of himself.”

Among the Presley disciples Zimny and Zanes interviewed for the documentary are Springsteen and Tom Petty, who, Zimny told The Times, shared his thoughts about the King of Rock ‘n’ Roll late in the process but who provided insights Zimny found invaluable.

“He was a light for all of us,” Petty said of Presley, whom he met in Florida when Petty was 10, on the set of a film Presley was shooting there — a meeting Petty has credited with helping put him on the path to be a musician himself.

“We all owe him for going first into battle,” he said. “He had no road map, and he forged a path of what to do and what not to do. And we shouldn’t make the mistake of writing off a great artist because of all the clatter that came later. We should dwell in what he did that was so beautiful and everlasting, which was that great, great music.”