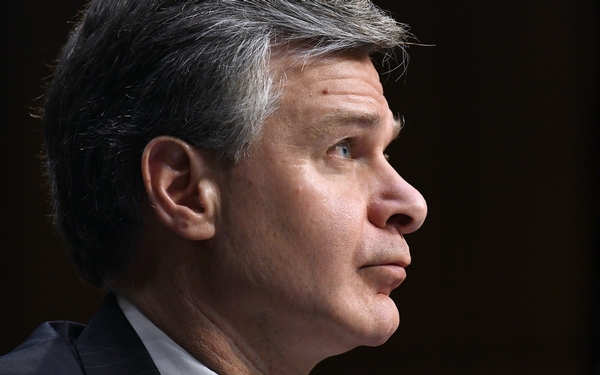 “We administratively closed the file in January, and then earlier this month we received some additional information, and we passed that along as well,” Wray said. He declined to give details of what the FBI reported.

Porter, the White House staff secretary who worked closely with chief of staff John Kelly, was forced to resign last Wednesday after a picture surfaced of one of his ex-wives with a black eye. Both his ex-wives said they had reported his physical abuse to the FBI last year.

Like some other White House staffers, Porter never received an official security clearance. Last week, Raj Shah, the White House deputy press secretary, said that was because the White House was still waiting for the investigation to be finished.

“We should not short-circuit an investigation just because allegations are made, unless they could compromise national security or interfere with operations at the White House,” Shah said. “The truth must be determined. And that was what was going on with Rob Porter. His background investigation was ongoing.

“He was operating on an interim security clearance. His clearance was never denied, and he resigned,” Shah said.

Wray’s account is sure to add to the furor over how Kelly and others on Trump’s staff defended Porter after the Daily Mail first reported the ex-wives’ accounts. Press Secretary Sarah Huckabee Sanders initially issued a statement praising Porter as “someone of the highest integrity and exemplary character.”

The president has sent mixed signals, privately indicating his unhappiness with Kelly but publicly hitting back in a weekend tweet that expressed sympathy for men accused of abuse, not for the women who suffered.

“Peoples lives are being shattered and destroyed by a mere allegation,” he tweeted on Saturday. “Some are true and some are false. Some are old and some are new. There is no recovery for someone falsely accused – life and career are gone. Is there no such thing any longer as Due Process?”

The issue is awkward for Trump, who famously boasted of assaulting women on an “Access Hollywood” recording that was leaked before the 2016 election. More than a dozen women have accused Trump of sexual abuse and assault during his years in business, allegations he has denied.

Wray also appeared to challenge another Trump claim during his testimony.

Trump tweeted last week that a controversial declassified memo issued by Republicans on the House Intelligence Committee “totally vindicates” him in the Russia probe, Wray repeated the FBI judgment that the memo was inaccurate because it left out important facts.

He also took exception with Trump’s repeated Twitter attacks on the FBI as politically biased and “in tatters,” calling the FBI rank and file “the finest group of professionals and public servants I could hope to work for.”

He said he tells them to let their work speak for itself.

“I encourage our folks not to get too hung up on what I regard as the noise on TV and social media,” he said.