Superb fish recipes for Lent (and the rest of the year) 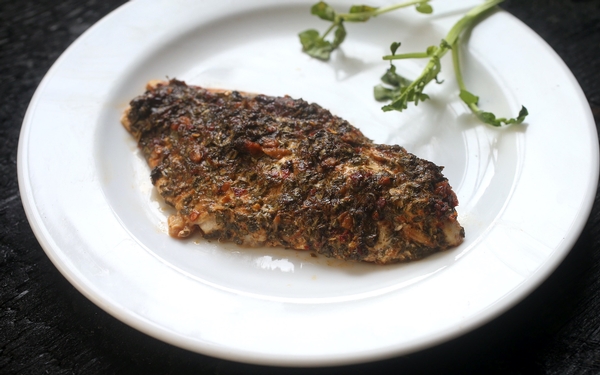 For Christians, Lent is a time for quiet reflection. For austerity. For repentance.

But mostly it’s a time for fish.

Catholics and members of some other denominations choose to eat fish instead of meat on Ash Wednesday and every Friday until Easter. (For the Orthodox denominations, Great Lent began Monday; adherents generally refrain from eating meat or fish on weekdays throughout the Lenten season.)

So the question is: How to make the fish?

Around here, the first choice, obviously, is fried. It is hard to go more than a couple of blocks in the area without running into a church or a VFW hall that is holding a Friday fish fry.

But what if you’ve had all the fried fish you want? What if you want fish — even if you don’t observe Lent — but you crave something a little more ambitious than fried?

That’s where we come in.

I tried making fish four different ways: with a flavorful sauce, lacquered in the Japanese style, marinated in herbs and spices, and baked in an exceptionally simple sauce.

How simple? It’s just mayonnaise mixed with garlic and a minced chipotle pepper from a can.

It doesn’t get easier than that, but it also does not get more flavorful.

According to the book “Food and Life of Oaxaca,” this is how fish is prepared in a tiny village in southern Mexico called Estero. What they discovered there is something I did not know or guess: Mayonnaise is a perfect medium for marinating fish.

As the fish roasts, the mayonnaise keeps it astonishingly moist and flavorful; it essentially self-bastes throughout the cooking process. It is great for smoothing out and softening the spice of the chipotle, or any other spice you’d choose to use, I would imagine. And most of it runs off the fish while it cooks, so it is less fattening than you might think. But no less delectable.

Next, I made the prettiest dish of the four, Baked Salmon With Watercress Sauce. The orange salmon sits in a pool of bright green purée, and it tastes every bit as delightful as it looks.

The salmon is salmon — it’s hard to beat. It’s briefly seared on top, and then roasted to perfection. That’s simple enough.

But what makes this dish stand out is the sauce. Though the title calls it a watercress sauce, it actually has more spinach than watercress. That’s a good thing, because watercress has a sharp, peppery flavor, and too much of it would overwhelm even a fillet of salmon.

For a particularly elegant fish dish, I turned to the late Michel Richard, who had been considered one of the very best chefs in America.

Richard had a dish that started with swordfish, which is always an excellent idea. Slightly sweet for a fish, swordfish also has a pleasing texture that is vaguely reminiscent of meat.

But what makes this dish so startlingly flavorful is what Richard does to it — and you can, too. It’s simple, actually.

Inspired by a Japanese dish of lacquered eel, he applies the same method to the swordfish. You first sear the fish on one side, then pour in soy sauce, cover, and cook until done. The whole thing only takes a few minutes, but the soy sauce forms a glaze on the fish.

Then you just top it with a tempting heap of green onions cooked in ginger, sesame oil and a little more soy sauce. A sprinkling of toasted sesame seeds adds an enchanting final touch.

My last offering is more of a preparation than a specific dish. Chermoula is a spicy marinade used throughout North Africa. You just mix up a batch, marinate any one of a number of relatively bland types of fish for an hour, and roast.

This is a bold-flavored marinade, mixing several assertive ingredients together into an unexpectedly harmonious whole. On the one hand, you have spices: cumin, paprika, crushed red pepper. On the other hand, you have herbs: parsley and cilantro. Everything is tied together with olive oil and an all-important dose of lemon juice.

This is an all-purpose marinade, especially useful for fish and seafood, but also good with meats and vegetables. You can use it with salmon, shad (if you can find it), swordfish, haddock, halibut or perch.

I used it with catfish, because it was the least expensive option. If you’re ever looking for a way to class up some catfish, this is the way to go.

1/2 teaspoon salt, or to taste

2. Combine the mayonnaise, chipotle chile and garlic in a small bowl. With a pastry brush or icing spatula, spread the mixture all over the fish, inside and outside. Sprinkle lightly with salt. Place on a baking pan and bake for 20 to 25 minutes, or until just barely opaque at the thickest part of the fish.

Recipe from “The Food and Life of Oaxaca,” by Zarella Martínez

2. To make the sauce: In a saucepan, melt the butter over medium heat. Add the shallot and sauté until translucent, about 3 minutes. Stir in 1 tablespoon of the flour to make a roux and cook, stirring constantly, for 2 to 3 minutes; do not let the mixture color. Stir in the watercress and spinach until wilted. Add the stock and simmer for about 5 minutes. Stir in the cream. Transfer to a blender and purée until smooth. Return to the pan and add salt and white pepper to taste. Set aside and cover to keep warm.

3. In a shallow bowl, combine the remaining 1/4 cup of the flour with a generous sprinkle of salt and white pepper. Very lightly dredge the top side of the salmon fillets in the flour.

4. Lightly coat a large ovenproof sauté pan with olive oil and heat over medium-high heat until the oil shimmers. Add the salmon, top-side down, and sear for 2 minutes. Turn the salmon over and transfer the pan to the oven. Roast the salmon for exactly 8 minutes; it should still be translucent in the center of the thickest part.

5. Just before the salmon is done, reheat the sauce over low heat until warm, 2 to 3 minutes. Transfer the salmon to warmed plates. Spoon 1/4 of the sauce onto each plate and place a fillet on top, or spoon the sauce over the center of each fillet, allowing the ends to show and the sauce to pool on the plate. Garnish each fillet with a watercress sprig and serve immediately.

Recipe from “Seafood,” by Williams-Sonoma

1. For the green onions: Stir the sesame seeds in a heavy, small, dry skillet over medium heat until brown. Transfer to a small bowl. Heat the oils in the same skillet with the ginger over medium-high heat. Add the green onion strips and stir-fry until almost tender, about 1 minute. Add the water and soy sauce and stir-fry until tender but still crunchy, about 1 minute. (This can be prepared ahead, cooled, covered and set aside at cool room temperature.)

2. For the swordfish: Use the ventilation fan to keep your kitchen from becoming smoky. Mix the sugar and pepper in a large soup plate. Dip one side of the swordfish in the mixture. Transfer to a large tray. Immediately, place 1 very large or 2 smaller heavy nonstick skillets over medium-high heat and add the 2 to 4 tablespoons oil. Add the swordfish and cook until the bottom is browned and caramelized, about 3 minutes. Pour the 1/4 cup soy sauce into the skillet. Cover the skillet and continue cooking until the fish is glazed and just opaque throughout, about 1 to 2 minutes.

3. To serve, rewarm the green onions by stirring over medium-high heat. Transfer the swordfish to 4 plates. Spoon the onions over the swordfish. Sprinkle each with reserved toasted sesame seeds. Serve immediately.

8 garlic cloves, crushed with the flat blade of a knife

1 teaspoon salt, or more to taste

6 to 8 small salmon steaks, about 6 ounces each, or swordfish, halibut, haddock, catfish or perch

1. Chop the cilantro and parsley leaves together to a very fine mince. You should have 1 cup of minced leaves. Transfer to a saucepan.

2. Crush the garlic with the salt in a mortar, or using the back of a spoon in a small bowl, to make a paste. Stir in the cumin, dried pepper, paprika, olive oil and lemon juice. Add to the saucepan with the herbs and mix well.

3. Have the fish steaks ready in a baking dish large enough to hold them all in 1 layer. Meanwhile, set the herb mixture over medium heat and warm until is very hot, but not boiling. Taste and adjust the seasoning. When it is the way you want it, pour the warm marinade over the fish steaks. Cover with plastic wrap and set aside for 1 hour.

5. Remove the plastic wrap and transfer the fish with their marinade to the oven. Bake for 20 to 30 minutes, or until the fish is done, basting every 5 minutes or so with the marinade. Serve immediately, spooning a little of the marinade over each serving.

Recipe from “The Essential Mediterranean,” by Nancy Harmon Jenkins

Recipe
Missing movie theater popcorn? Here's how to make it at home.
513 views