WGN anchor told a Muslim blogger that she didn’t ‘sound like an American.’ Her response went viral. 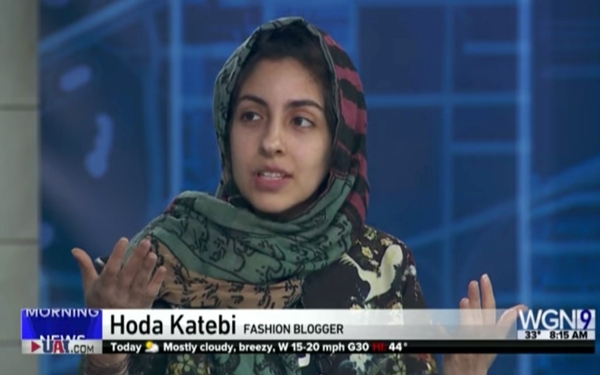 When fashion blogger Hoda Katebi, who wears a hijab, pushed back against the idea that Western dress in 1970s Iran connoted more freedom for women, her interview with WGN-TV news anchors got political

She’s a hashtag; she’s a meme. Chicago fashion blogger Hoda Katebi’s response to a WGN-TV news anchor who told her that she doesn’t “sound like an American” when she criticizes U.S. policy in the Middle East has been reported by media in Russia, England and Dubai. More than 10 million people have seen online clips of the contentious interview.

The controversy started in late January, when Katebi, 23, and author of the 2016 book “Tehran Streetstyle,” was interviewed by WGN Morning News anchors Larry Potash and Robin Baumgarten for a segment on Iranian fashion.

When Katebi, who wears a hijab, or Muslim headscarf, pushed back against the idea that Western dress in 1970s Iran connoted more freedom for women, the interview got political. Potash asked her whether Iran can be trusted when it comes to nuclear weapons, and Katebi responded with a critique of U.S. “imperialism” in the Middle East, citing “all of the violence that (the U.S.) hasn’t only created, but created the capacity for.”

“A lot of Americans might take offense to that,” Baumgarten responded. “You’re an American. You don’t sound like an American when you say things.”

“That’s because I read, you know?” Katebi said, laughing as she cut off Baumgarten with a line that would become a meme.

In an interview with the Chicago Tribune, Katebi, a University of Chicago graduate, said the interview went by in a rush and she didn’t fully process it until later when she obtained a video from a third party.

“I would not have gotten that comment had I been white,” she said of Baumgarten’s statement “You don’t sound like an American.”

“I think it (embodied) a very clear assumption that people have across the United States about Muslims as always being other, and foreign, and incompatible with the West, despite (the fact that) just two or three minutes before, we were talking about me being born and raised in Oklahoma. So, for me, that was an important moment to really bring to light a lot of assumptions that guide American thinking. But also it makes you think about, well then what does an American sound like? And what is she trying to say? (My) family is affected by U.S. policies, such as the Muslim ban — why am I not allowed to critique the state? And if I’m not American, what is American?”

WGN responded to a request for comment from Baumgarten with a written statement: “WGN anchors Robin Baumgarten and Larry Potash have apologized on the air, on social media and personally to Hoda. WGN-TV is committed to fostering education and a deeper understanding of race, religion, and identity. These are important issues and we will continue to focus on them in our reporting and community service.”

The interview got international attention after Katebi wrote about it on her blog, JooJoo Azad, on Feb 10.

“Robin called the first day the post went viral,” she said. She said Baumgarten “very much sincerely apologized,” and she accepted.

Interest kept building in the days after the post. Glamour.com, the Dubai fashion and lifestyle brand Emirates Woman, and the Daily Mirror in Britain were among those that ran stories. A video interview by the AJ+ media company got 4.8 million views on Facebook, and a clip tweeted by a New York lawyer got more than 6 million views. On YouTube, the video of the interview got more than 190,000 views and more than 760 comments, many highly favorable: “She up there spittin’ that truth fire ever so casually.” “This girl is my hero.” “GIRL YOU GO!!!!!!!!!!”

Katebi said she hopes that her WGN interview encourages people to question simple narratives about politics and society and that it encourages others to speak out about unequal treatment.

Asked what she has learned from the experience, she laughed.

“I’ve learned that I love the internet, but I’ve also learned to really take a stand against any form of micro-aggression and not to allow myself to normalize this even on the smallest scale. I was actually debating putting (my blog post) up, initially, because I was like, it’s not that wild. This happens all the time. But eventually, I was like, ‘Oh, to hell with it. Let me put it up on the internet and see what happens.’ ”

She was in a four-hour meeting when she uploaded her blog post, and she kept her laptop closed for the next eight hours. By the time she opened it, there was an avalanche of notifications waiting for her, and her inbox was filled with emails.

“For me, to see that the world really, truly took this, and said this is unacceptable, and this is not OK, and this cannot happen again, was really powerful,” she said.

“There’s a level of violence that I think Muslims and people of color have gotten used to, and I think, for me, I learned, say no and resist that and raise the bar.”