Why you should — and shouldn’t — buy an electric car 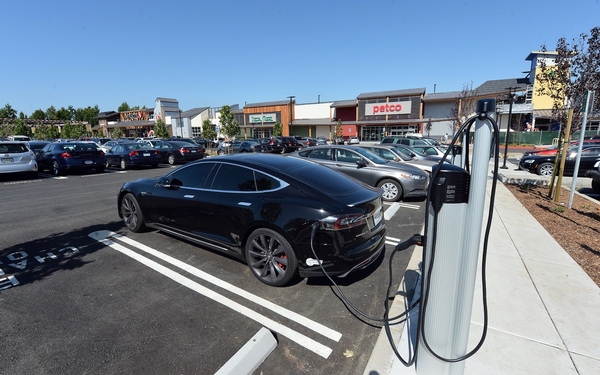 A Tesla charges at one of the electric vehicle charging stations in The Orchards shopping center in Walnut Creek, Calif., on Wednesday, Sept. 14, 2016. (Kristopher Skinner/Bay Area News Group/TNS)

California was on track to meet Gov. Jerry Brown’s initial goal for putting 1.5 million environmentally friendly vehicles on the road by 2025, a new report says, but then Brown upped the target.

Today, the official state goal stands at 5 million “zero-emission” vehicles by 2030, and though Brown has laid out funding mechanisms that would put $2.5 billion toward promoting the spread of electric, hybrid and hydrogen vehicles through consumer rebates and development of charging stations and other infrastructure, significant hurdles remain.

The funding will depend on state budgets crafted after Brown leaves office in January 2019, on the economy remaining healthy enough to sustain the green-vehicle spending, and on the price and availability of cobalt and lithium for car batteries.

Other challenges confront the push for electric cars and other Earth-friendly vehicles, but a new report from San Francisco non-profit Next 10 and research firm Beacon Economics reveals significant increases in the use of so-called zero-emission vehicles (hybrids use electricity and petroleum fuels). As of October, more than 335,000 of the vehicles had been sold in California, and sales leaped 29 percent from 2016 to 2017, the report said.

This news organization spoke with F. Noel Perry, founder of Next 10, about the future of green transportation in California. His comments have been edited for length and clarity. And yes, for the record, Perry drives an electric car.

Q: Why are electric vehicles a focus for Next 10?

A: Transportation emissions in California for the last year that we have statistics for, which is 2015, actually went up by 2.7 percent and within that sector the car emissions went up by 3.1 percent. As a state, we need to get those numbers going in the opposite direction.

Q: Why should someone should go out and buy an electric car right now?

A: They can make a huge contribution to reducing carbon dioxide emissions — that’s the most important reason. There are advantages in terms of going into the carpool lane. Electric vehicles are becoming (price) competitive with internal combustion engines. In our report we looked at the life-cycle cost of … electric cars, hybrid electric cars, gas-powered cars and we found that, for example, the Nissan Leaf and the Smart car are competitive right now even without (government) incentives. What’s driving down the cost of EVs is the reduction in the cost of the battery. Another important point is that the maintenance is minimal.

Q: And why shouldn’t someone go out and buy an electric vehicle now?

A: It really needs to suit their driving habits. The range that the car can go should fit with what they’re doing. For those that want to wait, the cost is going to be coming down. The range of the cars is increasing. Over time, the advantages of having an electric car are going to continue to increase.

Q: What are the obstacles to widespread adoption of electric vehicles in California?

A: The cost. That’s coming down. The range of the vehicles. There are more and more charging stations being created around California but in terms of a consumer deciding to buy an electric vehicle, they have to make sure that they’re going to be able to charge it when they need to.

Q: What changes need to be made by consumers, government and the private sector if electric vehicles are going to become an affordable and practical choice for the masses?

A: In terms of the private sector, we’re seeing some major investments in electric vehicles. Tesla is the best known. You have Chevrolet with their Volt and their Bolt. You also have BMW. There have to be more selection opportunities in dealerships and I think that’s coming. Policy is important in terms of helping to incentivize charging stations. On the consumer side, I think as the price continues to go down, as the range continues to get longer and longer for different vehicles, I think that will certainly help drive demand.

A: Over time they are not going to be necessary. They’ll be cost-competitive enough so that a consumer won’t need that incentive.

Q: How important is Tesla’s role in the electric vehicle market?

A: Tesla was absolutely the leader in terms of the success that it achieved with coming out with an all-electric vehicle. They continue to play an important role as they bring out new models. In terms of the reduction of greenhouse gas emissions because someone’s buying a Tesla and driving a Tesla, I think that’s absolutely good for our state and good for the world that someone’s driving an electric vehicle.