‘Annihilation’ review: Natalie Portman leads journey to the center of the blob 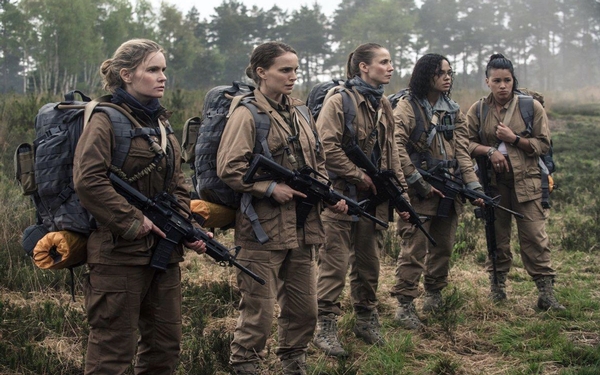 Alex Garland has been accused of white-washing the characters in A centsEURoeAnnihilation.A centsEURA (Paramount Pictures)

In the popular culture and various corners of our own lives, we confront the unknown in one form or another, learning something about our own fears and desires. The examples defy rational explanation. The Monolith in “2001: A Space Odyssey.” The Mist in Stephen King’s novella. The Smoke Monster in “Lost.” The Great Boyg in Henrik Ibsen’s “Peer Gynt.” The line at the Department of Motor Vehicles, its shape and duration endlessly mutating into something beyond human comprehension.

“Annihilation” adds a nervy but frustrating chapter to this encyclopedia of metaphor.

It comes from writer-director Alex Garland, whose previous film, “Ex Machina” (2015), was unusually effective speculative fiction involving artificial intelligence and Oscar Issac’s dance moves. Here, no such levity: Garland adapts “Annihilation” from the first in a 2014 trio of books by Jeff VanderMeer collectively known as the Southern Reach Trilogy. Its place on the bafflement spectrum lies midway between the Mist on one end, and the Monolith on the other.

The plot sounds like a straight-ahead “Predator” scenario, but with a weirder variety of predators and a predominantly female ensemble. An extraterrestrial life form crash-lands by a lighthouse somewhere along the Florida coast. The resulting, amorphous phenomenon, called “The Shimmer” (“Area X” in VanderMeer’s novel) invites exploration and human intervention, since it may well destroy Earth as we know it. A dozen separate teams on a dozen separate missions, however, have gone missing once inside the translucent Shimmer.

Natalie Portman leads the latest mission. She plays Lena, an ex-Army biologist whose husband (Oscar Isaac) has disappeared, along with so many others, inside The Shimmer on previous forays. Lena heads a team of formidable colleagues: Anya, a tough Chicago paramedic (Gina Rodriguez of “Jane the Virgin”); physicist Josie (Tessa Thompson of “Thor: Ragnarok” and “Westworld”); and anthropologist Cass (Tuva Novotny). Jennifer Jason Leigh portrays the mission overseer, a psychologist who knows more than she’s telling — a Jennifer Jason Leigh specialty.

The Shimmer has put the whammy on its little corner of earthly, swampy paradise, remaking the ecosystems on a cellular level, causing species of flora and fauna to mutate, while making conventional time and human psychology its plaything. Garland maintains a scrupulously methodical pace throughout this journey. The tone is somber, grief-shrouded, yet there are glimmers of wonder as the women find themselves transformed, in ways alternately subtle and alarming, by the world inside the aurora borealis blob.

What does Lena find when she arrives at her destination? Many things, among them: spoilers; a subjective riddle; a metaphysical tunnel containing … well, as I said, that’s a spoiler. Many inevitably will be driven nuts by “Annihilation” because this is not 1968 and this is not “2001,” which found a huge popular audience ready to tangle with Stanley Kubrick’s brilliant, icy imaginings. The narrative direction taken by Garland (the climactic discovery is considerably wiggier than the novel’s) trades in a degree of ambiguity and philosophical reflection rare in commercial moviemaking today.

And yet it doesn’t quite fall together in that transporting way of top-flight science fiction. The occasional jolts are jolting, all right, as the mission encounters a speedy, hungry albino alligator and, later, a mutated bear-beast (the latter makes for a particularly grueling attack sequence). But the movie feels torn between styles and intentions. It’s trippier than “Ex Machina,” and Garland makes a valiant go of its concerns, but “Annihilation” feels like a short-story amount of story pulled and twisted into feature length.

Commercially, of course, it’s prudent to venture into avant garde science fiction territory on a smallish budget, the way Jonathan Glazer did with his truly disorienting and memorable 2013 alien visitation film “Under the Skin.” Shot in mid-2016, “Annihilation” reportedly tested not well, leading to a dispute between its producers and, ultimately, the decision on behalf of Paramount Pictures to sell the overseas streaming rights to Netflix for a substantial portion of the film’s estimated $55 million budget. (The movie goes to Netflix in other markets a mere 17 days after its theatrical bow stateside.) Finance aside, certain ideas and images stay with you, and that’s to the credit of Garland, the performers, cinematographer Rob Hardy (filming took place at Pinewood Studios near London) and a host of designers. You may find yourself thinking about “Annihilation” a few days after you see it, simply because the idea of a reordered world of new life forms is so powerful.

Here’s a peculiarity, though: The Shimmer itself? It looks sort of blah. The sight and presence of the alien jellyfishy thingie should be an omnipresent source of dread, wonder or a mixture of the two. As realized in “Annihilation,” it’s oddly ordinary. Some big ideas, metaphorical or not, are very hard to realize on screen. I will try this movie again sometime. And I wonder if a stranger, more persuasively boggling director’s cut might someday emerge from the swamp.