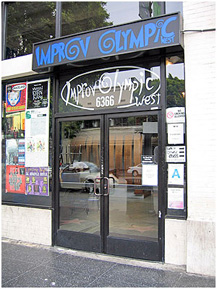 For those not saavy with the improv lingo, Improv Olympic West is the Los Angeles arm of the famous Improv Olympic in Chicago. Windy City alumni include Mike Myers, Vince Vaughn, Tina Fey and more. Most of the alumni have gone on to grand careers, with a large chunk of them working with „Saturday Night Live or the Upright Citizens Brigade. Others have gone on to work for Scrubs and Late Night With Conan O' Brien.

The IO West branch follows in the same vein as the original IO. Both locations offer training, workshops and live shows all with the goal of providing a place for young comedians to shape their craft.

IO West has a constant stream of shows playing at their Hollywood venue. Some titles include the Beer Shark Mice, Red Shirt Freshmen and the Lampshades. Shows are nightly, generally starting at 8 p.m. and continuing through the midnight hour. All performances are ages 21 and over only, so anticipate some raunchy humor and bad language ˆ the makings of a great improv show.

IO West is also home to Andy Dick‚s Black Box. What exactly is Mr. Dick‚s Black Box, you ask? Well, the Andy Dick Black Box Experimental Theatre is another venue within IO West for artists to showcase their work. Aspiring comedians/actors can book the theatre for their show and, hopefully, gain some exposure. The Black Box has different hours than the IO mainstage, so check the Web site for more details.

The Festival will also hold a panel discussion, daily improvisation workshops, and the 2006 Del Close Award presentation to Harry Shearer, star of This is Spinal Tap and „The Simpsons.‰

Festival tickets are $25 per show and $20 per workshop, which may seem a bit steep. However, the proceeds benefit Project Angel Food, a non-profit organization that provides daily meals to those homebound by the effects of AIDS and HIV.