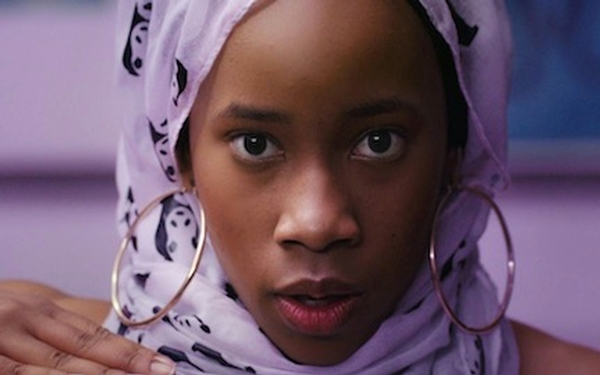 Zoe Renee in "Jinn," which is competing in the 2018 SXSW film festival. (Bruce Francis Cole/SXSW)

The recent success of “Lady Bird” pointed toward a heightened interest in the kind of mother-daughter stories rarely portrayed onscreen. And certainly nothing quite like “Jinn” has been seen before.

Premiering as part of the narrative competition at the South by Southwest Film Festival, the movie is the feature debut from writer-director Nijla Mu’min. As with the relationship among “Lady Bird,” filmmaker Greta Gerwig and her hometown Sacramento, the story of “Jinn” is rooted in Mu’min’s experiences growing up in the Bay Area around Oakland but is not intended as an exact depiction of her life.

In the film, high schooler Summer (Zoe Renee) finds her life upended when her mother, Jade (Simone Missick), converts to Islam. Everything seems to change — suddenly Summer is exploring religion, sexuality, identity, friendship and even her relationship to pizza. And Jade faces tumult of her own, when her job as a television meteorologist is suddenly placed in jeopardy by her decision to wear a headscarf on-air.

Though very much a coming-of-age story for Summer, the film pays close attention to Jade as well, making the film feel rounded and detailed in a rare way.

“I knew that I wanted to tell a story about this young girl who was impacted by her mother’s decision to convert to Islam and they’re both exploring who they are,” said Mu’min. “So it’s a coming-of-age story for Summer, but it’s also for Jade to figure out who she wants to be religiously, spiritually and in her professional life.

“It’s definitely a mother-daughter drama. From inception that’s always what I wanted to do — (explore) how this mother and this daughter are finding themselves in this new religious space with these new people around them,” she said. “Falling in love, going to work — how is this impacting them both? And ultimately how is Summer going to forge ahead with her identity?”

A little more than a week before the film’s SXSW premiere, Mu’min was gathered in a small bungalow office in West Los Angeles, just in the shadow of the 405, with producer Avril Z. Speaks and her two lead actresses.

The filmmakers undertook an extensive search to cast the role of Summer. Though Renee has been seen on the BET drama series “The Quad,” her role in “Jinn” makes for a dynamic feature film debut.

“Summer has to have this innocence about her, but then she also needs to have this kind of edge,” said Speaks. “And we were like, ‘I don’t know if Zoe is going to have that edge,’ and she came in and started dancing and she was in it.”

“I watched her tape so many times after that audition,” said Mu’min. “I just couldn’t stop watching it.”

Missick, best known for her recent role on “Marvel’s Luke Cage,” came to the movie through her husband, actor Dorian Missick, who was already cast in the project. After Mu’min reached out to Simone Missick about being in the film as well, she not only signed on as a performer but as an executive producer.

“I immediately thought this is something I want to be a part of,” said Missick, who tailored her shooting schedule around her work in “Marvel’s The Defenders.” “So often you see with films — when it’s a smaller-budget indie — if you don’t have the right people and the right pieces in place, things go awry. I just wanted to lend whatever hand I could in order to make this movie happen.”

“So often when you see stories about women of color and young women, it’s with some trauma. They’re being abused or violated or there’s some kind of tragic event as opposed to seeing what it is like to live in this body,” said Missick. “Which is universal. Because black girls are no different from white girls or Asian girls or Hispanic girls or Native American girls; we all go through the same questions of self-worth and sexuality and identity. Do we fit in or do we stand out? All of these things that we all as women have to deal with, but now you get to see it in this beautiful brown body.”

Mu’min’s debut arrives as part of a recent wave of films coming from creators in the Bay Area, as Boots Riley’s “Sorry to Bother You” and Carlos Lopez Estrada’s “Blindspotting” both captured attention at this year’s Sundance Film Festival, and Ryan Coogler’s “Black Panther” features scenes explicitly set in Oakland.

“It just feels like it’s the moment for Bay Area filmmakers,” said Mu’min.

For Renee, the ways in which Summer’s story was or was not Mu’min’s story was never a point of concern or confusion.

“And it was awesome because I was able to ask questions and say, ‘How does this work and how did you feel growing up in this life?’” said Renee. “It was cool that she was there as the cheat in the back of the notebook.”

In bringing a story rooted in her own life to the screen, it was important to Mu’min to see a lively depiction of a warm, complex Muslim community as she had experienced it.

“It means a lot for me, because I’m from that community. Growing up, the people I was around, I never saw them on screen. And I know they exist,” she said. “To be able to show them in this light, in a real, textured, flawed light, is important to me.

“At the same time, I wouldn’t say this film can speak for all Muslims. My experience is very singular to me. But the response we’ve gotten so far — people are connecting to it, Muslims, non-Muslims, non-black people.

“It’s becoming a little universal for people, but it’s also a source of representation for a community we just don’t see enough of in media.”