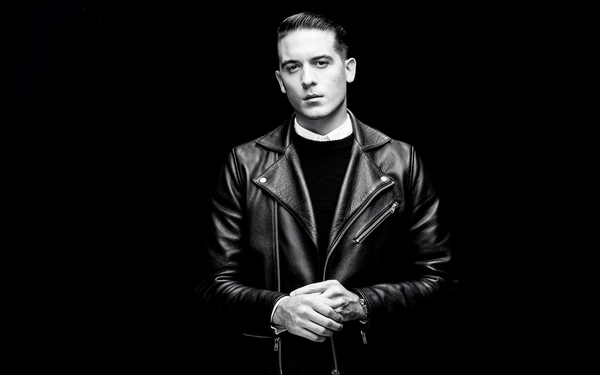 Five years ago, when the Tribune first interviewed him, he was cheerful and talkative, an optimistic, up-and-coming rapper crafting a strange and alluring mix of sample-heavy ‘50s greaser shtick and West Coast rap.

It’s been a long five years: During that time, G-Eazy, born Gerald Gillum and raised in Oakland, Calif., signed to a major label and released three Top 10 albums (the latest, the Fitzgerald-inspired fame lamentation “The Beautiful & Damned,” dropped in December). He worked hard, toured constantly and dated well, his personal life a source of fevered tabloid speculation.

There were rumors he was dating Britney Spears after the two performed together at the VMAs (probably not true, but the rumors didn’t hurt). He dated Lana Del Rey, whom he may have dropped for his current girlfriend, pop star Halsey, who brought him onstage during her recent “Saturday Night Live” performance.

Everything you think you might sample if you became famous — a Ferrari, a bachelor pad in Hollywood, any number of illicit substances — G-Eazy has already done it, written a song about it and grown tired of it. He’ll spend much of 2018 on the road — but in a phone interview before his tour even began, a polite but exhausted Gillum already sounded over it. The following is an edited transcript of that conversation:

Q: If anybody had told you five years ago that you’d be having the success you’re having now, would you have believed it?

A: There’s two sides to that question. On the one hand, I always had this foolish belief that it would eventually happen, for some strange, crazy reason. I don’t know what gave me that confidence, because there was a long time when it definitely didn’t look like it was going to work, and I stuck to it. If you look at two pictures of then and now, it would be pretty shocking, because we’ve come a long way, and it’s a really hard industry to make it in. So I’m really grateful every day that we’ve come as far as we have.

Q: Are you glad it took as long as it did? Did it give you a grounding to help you prepare for it?

A: Yeah, it gives you perspective, and it helps you appreciate everything that much more. At the end of the day, everything’s relative and you adjust to where you are, but if it happens overnight, you don’t have any context of the long journey it took to get there.

Q: Your sound also got a lot more confessional and a lot more open. It seems to be hitting at the right moment.

A: My music is pretty autobiographical. You can take any album, and it’s gonna be a chapter of wherever I’m at at that point in my life. That’s kind of the only way I know how to write, is from an honest perspective.

Q: Did you think it would all be a lot more fun than it seems to be?

A: Well, no, there’s definitely a lot of fun that comes with it. It is a beautiful life, getting to travel as much as we do, getting to travel with friends and see the world and make a living off of writing songs and performing them. There’s a lot of blessings that come with it.

Q: It seems like you spend a lot of the new album trying to cheer yourself up, give yourself little pep talks.

A: Yeah. I’m probably just pretty conversational with myself. I sometimes use music as a way to talk to myself, I guess. I don’t know if that’s my Gemini twins talking to each other or what, that’s just how I like to write songs.

Q: There’s a lot about duality on this album. Do you look at G-Eazy and Gerald as very separate people?

A: They’re separate people who share the same body, for sure.

A: How can I say this, it doesn’t really work that way, especially not for the people around me that get affected by one or the other’s actions. It’s not a fair excuse to say, “G-Eazy did that,” if Gerald still has to deal with it.

Q: It’s striking how many women you’ve worked with. A lot of rappers don’t do that.

A: I don’t know. Take (Halsey collaboration) “Him & I.” I’ve always liked working with female vocalists, and using our back and forth as almost a conversational arrangement.

Q: How did that song come together?

A: That song is just a snapshot of who we are, and how we are. We’re both pretty crazy.

Q: Do you feel like people think they know more about you than they really do?

A: Yeah, but that comes with the territory.

Q: Are you kind of burned out by the whole album/tour/album/tour cycle?

A: It can happen if you’re not careful. That’s why you’ve gotta take time out and take care of yourself.

Q: Are you good at doing that?