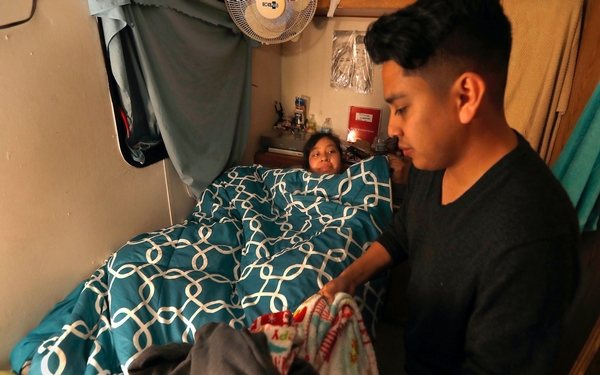 UC Berkeley student Ismael Chamu, 21, prepares to put another blanket on the bed for his sister Yazmin, 17, as she gets ready to go to sleep.

Ismael Chamu wakes up at sunrise, shivering in the drizzly morning’s chill. He rises from the floor of a small trailer, where he sleeps wedged next to his younger brother and an arm’s length from his two sisters, who share the only bed.

As he cooks breakfast, the smell of scrambled eggs and ripe sewage combine. There is no sewer hookup so when the storage tank is full, as it is this day, everyone holds on until they can get to a nearby gas station.

At 7:40 a.m., he shepherds his sisters to high school, a 30-minute walk through gang territory in Hayward, just south of Oakland. At the school gate, he hugs them goodbye.

Then he heads to his classes at the University of California, Berkeley, the nation’s most elite public research university.

Ismael looks the part of a typical college student, with his backpack, black jeans and stylish fade haircut. But he bears extraordinary burdens.

He’s one of tens of thousands of California college students slammed by the state’s affordable housing crunch.

Ismael constantly scrambles to find shelter and enough food for himself and his siblings while working a campus job, leading a student club and trying to earn a bachelor’s degree in sociology.

In the last 18 months, he has slept on couches and floors, in trailers and attics. Since November, he and his 20-year-brother Edward have rented the 20-foot-by-8-foot mobile home, parked in a Hayward driveway. His sisters joined them in January after their parents fell on hard times in the Central Valley and were forced to live in their car.

But Hayward has outlawed living in residential trailers. The family is due to be evicted Tuesday. And so the scramble will begin again.

“You do what you gotta do,” Ismael says gamely.

Financial aid covers tuition for the state’s growing number of low-income students, but they mostly are on their own when it comes to paying for places to live. Many UC campuses are in some of the priciest real-estate markets.

A recent University of California study estimated that roughly 13,000 of the system’s 260,000 students have struggled with unstable housing. That guess comes from two 2016 surveys, in which 5 percent of the nearly 70,000 students who responded said they had couch-surfed, lived on the street or found temporary shelter in vehicles, motels or campgrounds at some point since they had enrolled.

UC President Janet Napolitano has a plan to build 14,000 affordable beds by 2020 and has given each of the system’s nine undergraduate campuses $3 million to help them meet housing needs. UC and Cal State campuses are trying to reach out to students who might also be hungry with expanded food pantries, meal-sharing plans, campus gardens and emergency loans.

But most everyone agrees that the efforts are not nearly enough.

Ismael arrives at Berkeley after a 90-minute trip by foot and a train on the Bay Area Rapid Transit system, or BART. He steps onto a campus with grand buildings and a bell tower, redwoods and a flowing creek. As he arrives, the rain stops, the clouds part and the sun peeks through.

It seems crazy to be at Cal, Ismael says.

He is the son of a migrant worker who never got past first grade in an indigenous community in the southern Mexican state of Guerrero. His family has moved more times than Ismael can keep straight. He was born in San Diego, then lived down South, where his father cut Christmas trees in North Carolina and picked tobacco in South Carolina.

Ismael was the only Mexican in his class, but a couple of white boys befriended him. “They said I was a good Mexican,” he says, “because I was smart.”

When he was 14, the family moved to Hayward on the promise of lucrative construction work. They lived with an aunt for a few months until she kicked them out. Then came a blur of schools and homes: a pink apartment in Hayward, a friend’s place in San Jose, a trailer in Los Banos.

Ismael bumped through three different high schools and somehow managed to excel — even though he woke up most mornings at 4 a.m. to help his father with gardening jobs before he rushed to class. He took eight Advanced Placement courses, passed six of the exams and racked up a 4.0 GPA.

His stellar academic record — aided perhaps by his personal essay on how he wouldn’t let his hardships defeat him — helped him become one of the lucky 18 percent of 74,000 freshman applicants admitted to Berkeley in 2014.

He thought about not going, to be able to earn money for his family. But it was his parents — and a high school counselor — who urged him on.

By 12:30 p.m., Ismael is in his urban sociology class, listening intently to professor Joanna Reed’s lecture on gentrification’s effect on low-income communities. He is planning to work with Reed on a research project about the growing number of Californians living in mobile homes and the backlash against them.

After class, Ismael heads to the campus food pantry, which is stocked with pasta, rice, jars of spaghetti sauce, cans of soup and baguettes. He takes a box of oat cereal and a can of black bean soup, and then he is out the door.

“That place makes me sad,” he says.

Why? His eyes redden, and he breaks down in tears.

“We have pretty portraits and murals talking about ending homelessness, but it doesn’t go away,” he says. “I try to do the best I can, but I still don’t get ahead. You take one foot forward and a giant leap backwards. You can’t live off of that.”

At times, the stress is overwhelming. He’s had to call the police on his landlord, who has been wanting him out. He’s short of credits to graduate on time this spring because he dropped two classes to take care of his sisters. His and Edward’s combined monthly income, roughly $1,000, barely covers the $650 trailer rent, sewage pumping fees, food and transportation. He can’t qualify for food stamps because he has no permanent address and he’s spent most of a $20,000 educational loan, much of it to help his family.

In a few moments, he’s got his game face back on.

Ismael wants to go to graduate school and eventually become a teacher. His biggest dream, he says, is to provide his parents with a decent place to live.

Lunch involves one of many hard choices. He would like a $6 Asian bento box. But instead he uses a Subway coupon and gets a chicken and bacon melt. He feels guilty whenever he splurges on himself with money that could help his family.

His afternoon class on global urban inequality is canceled, as is the evening meeting of United Children of Immigrants, the student club he started. So he starts the long trek back to Hayward to meet his sisters. He figures he travels 60 miles a day, five on foot, the rest on public transit.

He is supposed to bring Jocelyn back to her high school for a 6 p.m. meeting about a program focused on college prep and multimedia arts. By the time they meet near the trailer, it’s 5:50 p.m., cold and dark.

Ismael is exhausted. For a moment, they discuss skipping the meeting. But they decide that is not who they are so they set off on another long walk.

It’s 8:45 p.m. when they get home. Ismael washes the dishes but stops when he hears burbling. Sometimes, the pipe clogs and water spurts out the shower drain into the cabin. After a few minutes, the hot water runs cold. Yazmin has to wait an hour for it to get hot enough to shower.

Edward is working as a store manager for a San Francisco olive oil firm while taking classes at Chabot College. He’s the last one home — at about 9:30 p.m.

He gets out eggs to scramble for his dinner. Ismael watches, protesting, “Use one egg, OK? We’re down to three eggs, bruh.”

While the hot plate’s on, the portable heater has to stay off. Running them both blows the power.

They all settle down to homework as a hard rain drums on the leaky trailer roof. Yazmin sits on the bed, prepping for an AP government test on the judiciary system. At the small table, Ismael works on a midterm paper while Jocelyn finishes drawings about her life for her Spanish class. One shows herself with a scowling face, clenched fists pressed to her temples. “When we arrived, we would move constantly,” the caption says.

In between studies, they chat about school, their hair, the rain. Yazmin tells Edward to watch his sodium. Edward tells Ismael not to get distracted by his cellphone.

“I want to cuddle,” Jocelyn says, throwing herself between Edward and Yazmin on the bed. She scratches her brother’s head. “You’re like a cat.”

At 12:15 a.m., Ismael covers his sleeping sisters with a blanket. He balls up a hoodie for a pillow, turns out the light and drops to the floor to sleep.