Will ‘Far Cry 5’ live up to expectations? 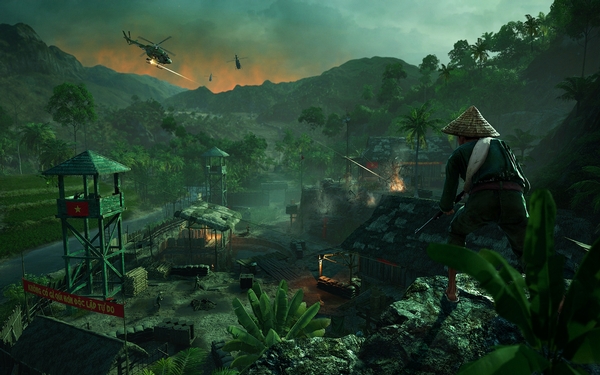 Although “Far Cry 5” seems to build upon the success of the past, it does try to advance the series by creating a radically open world. (Ubisoft)

At first, I thought that “Far Cry 5” had two of those elements. With his tattoos and Bible in hand, cult leader Joseph Seed has a fascinating and magnetic personality, one that has his followers in his thrall.

Part of the reason for that is his use of the drug Bliss during baptisms into his sect. Followers pour the chemical into the water and the potential faithful are doused in it. Their demeanors change after that and they become people who would die for the man.

The last part gave me pause. The fictional setting of Hope County, Montana, isn’t as exotic as the Rook Islands or Kyrat.

Being set in the U.S., there’s seems as though there would be an atmosphere of security and safety. If a doomsday cult ever took over an area, wouldn’t federal authorities come crashing in and laying down the law? How can situations that amount to war crimes happen in the middle of the United States?

The beginning of “Far Cry 5” makes a convincing argument about how that can happen. For the first time, players create their avatar who becomes the rookie officer who flies into the heart of Seed’s Church of Eden’s Gate. Accompanied by a U.S. Marshal, they pass by an enormous statue of the cult leader, showing his iron grip on Hope County. After an investigation, a warrant was issued for the religious leader’s arrest. The local law enforcement and federal agent have flown in to serve it.

Naturally, this upsets his congregants. After handcuffing Seed and walking him through his compound, they enter the chopper, expecting a run-of-the-mill arrest. That doesn’t happen as his worshippers rush the helicopter and cause it to crash. Everyone except for the marshal and the rookie are alive, and that’s when players learn that Seed has infiltrated the local authorities.

No backup would be coming, and that’s when it felt like this was a “Far Cry” game. Isolated and alone with a maniac and his community of zealots, players initially feel helpless, but they’re rescued by Dutch, a doomsday prepper who has a bunker on an island in the middle of a Montana river.

He gives players a change of clothes, a gun and orders to build a resistance. These first set of missions serve as tutorial showing how players should interact with the world. There are four ways to foster a rebellion in Hope County.

1. Rescue civilians: This is something “Far Cry” veterans have been doing since Ubisoft rebooted the series. Players will find innocents being prepared for execution and rescuing them by killing their captors will sometimes yield an ally or at least intelligence about the area. Again, saving civilians should be done with stealth because supporters of the Project at Eden’s Gate, colloquially known as Peggies, will shoot hostages if they discover they’re in danger.

2. Destroy cult properties: One of the more interesting updates in “Far Cry 5” is that players no longer climb towers to obtain quest information and details about the surrounding area. Now, players have to read signs or save people to obtain tips. Sometimes the intel is bad or sometimes good but vague. It’s a more organic and realistic way of figuring out the lay of the land.

Sometimes information will lead players to cult properties. These are small areas where a statue of Seed is built or a makeshift temple to him has been erected. They’re sometimes guarded by his followers. Destroying these structures reduces the cult’s influence in the area.

3. Complete missions: As players build the resistance, they’ll see a meter go up for a zone. This represents the strength of the anti-Seed fighters in the area. If players rescue people or come across prepper clues, they’ll unlock storyline quests and side missions. Finishing these tasks also increases the meter. But players have to keep an eye on it because Seed and his minions will fight back and players will have to be there defend their gains.

In one mission, I joined Dutch’s niece, Jess Black, to hunt down a fanatic who butchered nonbelievers. In another side quest, I located a message for another person. That had a clue on how to fix the pump of a flooded bunker. I was able to figure out what area the note was talking about and got the money and crafting items for explosives.

4. Liberate Cult Outposts: The last way to raise resistance is another old gameplay element from previous “Far Cry” titles. Scattered throughout Hope County are outposts guarded by Peggies. These are key points and heavily guarded.

The fun in attacking these outposts is the wide range of strategies that players can employ against enemies. They can go a stealthy route and destroy the alarms and methodically take out enemies. Another approach is to prepare traps beforehand and attack via sniper rifle. There’s also the option of going in guns ablazing, shooting cages that hold animals to create maximum chaos. There’s a puzzle element to these scenarios and clearing an outpost efficiently is just as satisfying today as it was nearly six years ago.

Although “Far Cry 5” seems to build upon the success of the past, it does try to advance the series by creating a radically open world. Once players leave the confines of Duncan’s island they can tackle the Joseph Seed’s three heralds — John, Jacob and Faith — in any order they want. They each own a specific territory in Hope County and specialize in different aspects of running the cult. Jacob takes care of the military wing while John specializes in the legal dealings. Faith deals with Bliss, which is the key to converting nonbelievers.

Keeping up with the philosophy of freedom, Ubisoft gives players free rein to create the protagonist who is dubbed the Rookie. They can make the hero male or female. They can change their race and facial characteristics. Lastly, they can switch out their clothes over the course of the campaign.

Adding to that is the Guns for Hire system, which lets players call in allies they have befriended over the course of the campaign. Some allies can be random people they rescue, but others such as Jess Black and Nick Rye specialize in certain tactics. Jess is the stealth huntress who relies on the bow and arrow while Nick flies in with his plane to mow down foes. There’s even animal friends such as Cheeseburger, a bear, and Boomer, a dog, who can help players in battle.

Capping off the freedom of character creation is the progression system, which is based around perks. Players earn these points from different actions in the game. Perks can improve stealth or boost health. What’s interesting is that the character-driven Guns for Hire benefit from the hero’s perks adding another layer of strategy in choosing whom to bring into a mission. Of course, there’s also the option to bring in a second human player who can drop in to help.

Lastly, “Far Cry 5” features plenty of diversions. Being in Montana, players can naturally hunt deer, wolves and bears. In addition, they can also cast their reels into ponds and rivers in a surprisingly satisfying fishing game.

From what I’ve played, “Far Cry 5” is shaping up to be another good chapter in the series. It definitely makes some smart changes in order to keep the franchise somewhat fresh. The only element that gives me pause is that there may be too much to do. That feature creep could perhaps bog down the game.

“Far Cry 5” is scheduled for release March 27 on PlayStation 4, Xbox One and PC.