Hot Snakes: The return of the ‘down-stroke warlords’ 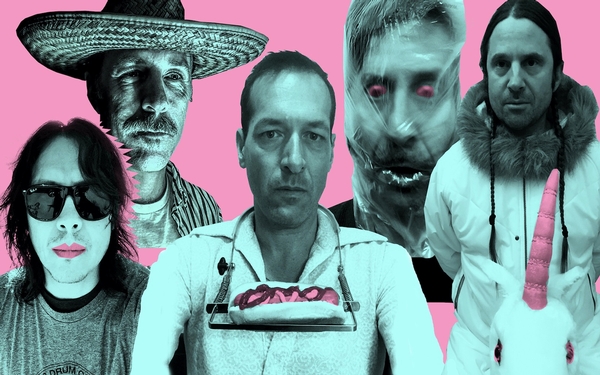 John Reis has been a commotion-starter in San Diego’s indie music scene since he was a teenager in the ’80s. “Jericho Sirens” (Sub Pop), his forthcoming album with Hot Snakes, one of many bands with which he’s been associated, brims with no-fuss guitar carnage. Little wonder the singer-guitarist is typically full-on when he picks up the phone for an interview.

“The idea of putting on a show, putting out a record as when we started playing together, that feeling never left,” Reis says. “In some ways I don’t feel any different than when I was a 16-year-old kid on the bed playing in my parents’ house. It might seem absurd to say, but it’s better now. We’re better at being down-stroke warlords. The shows and the hanging out with each other have been perfected. It’s an important part of being in a band that people don’t think about, but we’re having more fun now, and having fun and playing rock ‘n’ roll go hand and hand.”

If that sounds like a more mature perspective kicking in, Reis isn’t having it. “It’s the exact opposite — it’s an immaturity thing. We’re regressing,” he says. “We’re not worrying so much about stuff, not caring about things that have no impact if a song or a show is good. It’s just more about the hangout with friends doing something we love.”

Reis has been playing with singer-guitarist Rick Froberg since they were in high school, including a stint in experimental post-punk band Drive Like Jehu. At the same time, Reis was also leading rave-up kingpins Rocket from the Crypt. Both bands toured in the ‘90s, and Reis also found time to work on solo projects as well as establish a label, Swami Records, dedicated to releasing music by San Diego-area bands, including his own. Because he apparently wasn’t busy enough, Reis established Hot Snakes with Froberg in 1999, on a mission to melt rock ‘n’ roll to its essence.

“I loved playing guitar and letting it be more naked, just rhythm and dissonance, something more connected to the DNA of rock ‘n’ roll than we did in Drive Like Jehu,” Reis says. After releasing three white-hot albums, Hot Snakes disbanded, only to re-emerge in 2011 to play some shows. A few years later, Froberg and Reis put Drive Like Jehu back together to tour, but no new music emerged.

“Touring with Drive Like Jehu was fun, but at times felt like the musical equivalent of moving back with your parents and putting on shoes that were a little too tight, clothes that don’t fit too well,” Reis says. “That band could have made new music for sure and it would have been interesting to see what it would sound like present tense, because the shows were starting to sound better and better. Unfortunately it came to an end and it left a void. Now what?”

Froberg and Reis decided to focus their energies on recording what became “Jericho Sirens,” marking a 14-year break between Hot Snakes albums.

“When we first started playing together again, it never felt like a ‘reunion,’ just a bit of a break,” Reis says. “We had separate bands, but Hot Snakes never felt like it needed kindling to fire it back up. It was obvious that it was what we had to do. I love Rick’s voice, his artistic choices, his guitar playing, and whatever unique kind of kernel that I bring to a group is always made better by collaborating with him, his input. We’re best friends and by this point, we’re more like family.”

For Reis, the notion of overthinking something is a sign that he’s on the wrong path. He’s put his record label on hold because it became more about promoting and marketing rather than allowing him to focus on the things he loves best: art and music.

“I enjoy putting out our records and records by our friends,” he says. “I’ve always approached it like art, a way to document something cool, a way to further immerse myself in the music. But there needs to be a business to it too, which I am completely not interested in. It’s not really fun finding ways to make people interested in what you’re doing. That’s why I let Sub Pop reissue our catalog. That’s what they do and they’re really good at it. I’ll continue to do something on Swami here and there, but it won’t be like 10 years ago, when we had 10 things coming out a year. People stopped buying records basically because they’ve been conditioned that you don’t need to pay for something. Which is fine, but it’s not up to me to figure out the solution. I don’t care about the technology. I like records and I like music, and anything that gets in the way of that, I’m not interested.”

Enter Hot Snakes, a band that holds a timeless appeal to anyone who grew up on hardcore and garage rock, a promise of good times fused to a pummeling sense of aggression and resolve.

“It’s a band that no one had to rechannel,” Reis says. “Writing that kind of guitar music is still relevant to me. I’m a guitar player and I write songs on guitar. I want to trample people with my down strokes, and suffocate the listener with velocity and rhythm. It’s what I do best.”