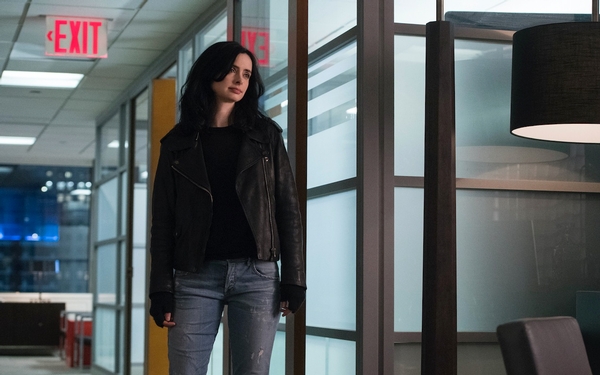 On the Upper East Side of Manhattan last summer, Jessica Jones was doing her thing.

The sardonic private detective played by Krysten Ritter was following a lead to a makeshift veterinary clinic and ended up in a verbal tiff with a snotty Goth staffer. The scene, which appears in the second season of “Marvel’s Jessica Jones,” involved no flying or feats of superhuman strength — just a few withering eye rolls, Jessica’s weapon of choice.

Between takes, Ritter, clad in her character’s version of armor — frayed blue jeans, a tank top and a leather jacket — laughed as she and director Jennifer Lynch contemplated what to have for lunch. No one fussed with Ritter’s hair or makeup. For a series that makes its much anticipated return to Netflix on Thursday, the overall effect was distinctly low-key; even the production name on the director’s chairs and clapperboard was a discreet alias.

“Sometimes you forget it is a superhero show,” Ritter said. “We don’t do a ton of stunts, we don’t do a ton of action. We spend so much time in Jessica’s head and, in Season 2, in her heart. We keep her boots on the ground, and people gravitate and connect to her real-world problems.”

When the series premiered in November 2015, the story of a prickly young woman with superhuman strength, a drinking problem and an acute case of PTSD resonated with viewers well beyond the Comic-Con crowd.

Created by “Twilight” screenwriter Melissa Rosenberg, “Jessica Jones” was praised for its depiction of its heroine, a survivor struggling to move on from a sexually and emotionally abusive relationship with the devious Kilgrave (David Tennant). A dashing but coercive sociopath, Kilgrave used his powers of mind control to turn tough-girl Jessica into a compliant sexual object. Without depicting rape on-screen — something that has become a minor epidemic on TV in recent years — “Jessica Jones” tackled difficult subjects like consent and recovery, all while delivering the requisite genre thrills.

On location for the show at a working hospital, Eka Darville, who plays Jessica’s drug-addicted friend Malcolm Ducasse, puts it memorably: The show is “a gritty, deeply analytical and poetic piece of storytelling that happens to be set against a backdrop where people can crush skulls with their hands.”

Though it’s been off the air for nearly 2 1/2 years, “Jessica Jones” may be more relevant than ever at a moment when the national conversation is focused on sexual abuse and harassment by powerful men. While she welcomes the conversations, Rosenberg says delivering a message was never the primary goal.

“We never started Season 1 with ‘Here’s the issues we want to attack.’” she says. “It was always, ‘Here’s this character, not defined by her gender, but informed by it. She has this encounter in her background with her assaulter, and that’s part of the story.’ I think that’s why it played well, because it was really focused on a survivor versus the incident. That’s how we always approach it: we’re just telling stories for a character.”

“Jessica Jones” also returns at a moment when another Marvel adaptation, “Black Panther,” is minting money at the box office, disproving long-held assumptions about black films and the appeal of inclusive superhero narratives.

“People didn’t expect genre TV to tackle such a real-world problem in such a real-world way,” says Jeph Loeb, head of television at Marvel Entertainment, citing the 2016 companion series “Marvel’s Luke Cage,” about a black superhero with bulletproof skin. The series felt more relevant with headlines about Black Lives Matter.

“Marvel works best when you take what’s happening around us and you put it through the Marvel prism and it comes out as action-adventure that has characters who are developed, and issues that are relevant to people, but it doesn’t feel like it’s a soapbox,” Loeb adds.

As Ritter recalls, the second season, directed entirely by women, was completed just days before the sexual misconduct scandal surrounding disgraced film mogul Harvey Weinstein broke. “I remember (costar) Carrie-Anne (Moss) and I texting each other at one point being like, this is so crazy that we did this story line,” she says.

The timing is coincidental as Jessica continues to deal with the fallout from her entanglement with Kilgrave. Though now dead (she polished him off with a quick snap of the neck in the first-season finale), he continues to haunt her emotional life.

“A lot of the aftermath and the turmoil that she went through in Season 1 and before that doesn’t just go away because she killed her tormentor. Nothing is fixed,” says Ritter.

Jessica finds herself falling “into a deeper, darker hole” as she struggles with the question, “Am I a murderer, or did I do the right thing?” With help from best friend, child star turned radio host Trish Walker (Rachael Taylor), Jessica also probes her mysterious past in search of the truth about the origins of her superpowers.

Their close-knit yet complicated friendship, which endures through various failed romances and high-stakes investigations, is key to the story.

Relaxing in her trailer, Taylor praises Rosenberg’s writing: “It’s super enjoyable on the surface and dark, and then there’s all these, kind of, subversive layers underneath.”

She’s particularly impressed by the drama’s nuanced portraits of Jessica and Trish, imperfect women with often-messy lives. “There are a thousand notes to the way she comments on the female experience. … She just lets it all exist.”

Another critical part of “Jessica Jones’” appeal is Ritter, who blends palpable anguish with caustic wit.

“She has not only amazing dramatic chops, but she can also deliver a dry line,” says Rosenberg, who views her lead actress as a full creative partner. “There can be some really dark storytelling, and you just always have to undercut it with levity, or it just becomes relentless. That was an absolutely essential factor in whoever was going to be our Jessica. Her performance has informed so much of our storytelling.”

Ritter, an accomplished writer who published her debut novel “Bonfire” last year, says she and Rosenberg “have a very rare, unique, creative marriage that excites both of us endlessly. It’s our relationship that allows the character to live and breathe as she does. I feel like we’re co-owners. Jessica is half her, half me.”

TV Time
(Almost) every show coming to TV this summer. And 29 that aren’t
426 views