‘Breaking Point: The War for Democracy in Ukraine’ goes beyond headlines with a thorough approach 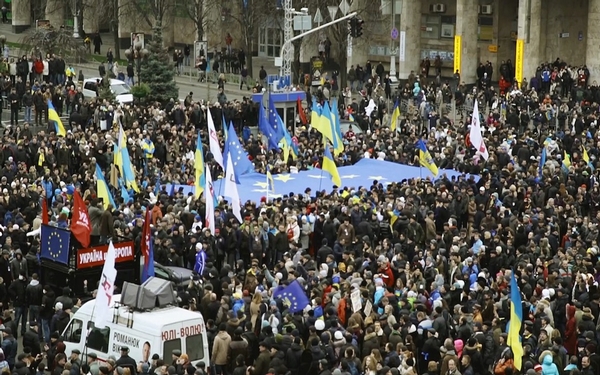 The documentary "Breaking Point: The War for Democracy in Ukraine" details the protests that led to a premier's ouster and Russia's incursions. (Synergetic Distribution)

A man drives alone through a remote forest. He is headed toward a war zone. He looks every inch a soldier, but he is not.

He is a man who started a theater school for children, who believes “beauty and art will save the world.” But then, on a day in Feb. 18, 2014, something changed.

“They started killing people,” the man says, matter of fact. “It was the breaking point, when everyone realized watching, helping from a distance, wasn’t good enough anymore. Someone has to do this job.”

This is how “Breaking Point: The War for Democracy In Ukraine” begins. Other fine documentaries, like “Winter on Fire: Ukraine’s Fight for Freedom” and “Maidan” (named after Maidan Square in Ukraine’s capitol city of Kiev), have focused on this cataclysmic period in Ukrainian history, but “Breaking Point” has a different, more comprehensive approach.

Harris, a three-time Oscar winner whose films include “The Long Way Home” and “Into the Arms of Strangers: Stories of the Kindertransport,” and Sanin, a top Ukrainian director, have connected what happened in Maidan to what happened afterward, Russia’s annexation of Crimea and its predatory invasion of the rest of Ukraine.

It enables viewers to catch up on one of the most highly dramatic situations of recent years, a heartening revolution in Ukraine that was as sweeping as it was a complete surprise.

But “Breaking Point” is not just a history lesson. When Russian President Vladimir Putin took advantage of Ukraine’s chaos to invade, he did not just send troops, he unleashed a chilling disinformation campaign that looks from this vantage point like a trial run for the one in this country during the last presidential campaign.

Everything started late in 2013 when Ukraine’s prime minister, Viktor Yanukovich, refused to sign a painstakingly negotiated deal that would have moved Ukraine closer to the European Union and instead indicated Putin’s Russia was his partner of choice.

The protests began with small groups of students quietly occupying Maidan and began to escalate when the government sent the Berkut, a tough special forces unit, to roust them.

With interviews from a range of people, including that theater director, Andriy Sharaskin, “Breaking Point” shows how the violence at Maidan ramped up, culminating with 123 killed, with U.S. scholar Timothy Snyder noting “there’s never been anything like it; people died for a united Europe.”

The most chilling interview is with investigative reporter Tetyana Chornovol, who vividly describes the circumstances of being severely beaten by pro-government hooligans.

A week after Yanukovich fled the country, Russian troops, officially insisting they were local separatists though soldiers are seen on news footage telling reporters they are Russians, made a naked land grab.

When Ukrainian troops, expected to fold, rose to the occasion, Russia responded with a shrewd propaganda war that echoes the disinformation campaigns it has used in the U.S. “They understand Western media,” one observer says, “better than we do ourselves.”

Though in many ways, the story “Breaking Point” details is as heartening as can be imagined, the filmmakers are too savvy not to end on a note of caution.

As recent news stories have emphasized, one of the main problems Ukraine has is the internal one of belief in rule of law in the face of a legacy of corruption that remains hard to stamp out.

As Anne Applebaum, the Pulitzer-Prize winning author of “Gulag: A History” puts it, the situation in Ukraine asks the question, “Can European democracy survive into the 21st century?”

It is bad news for us all if it can not.