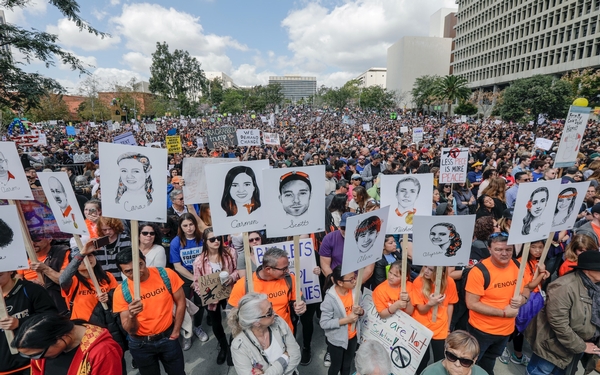 Thousands of Southern California residents flocked to downtown Los Angeles on Saturday morning, one of hundreds of marches across the county to denounce gun violence and call for stricter firearms laws.

Demonstrators in L.A.’s March for Our Lives rally marched from Pershing Square to Grand Park, carrying handmade signs and banners that said, “Protect kids, not guns” and “I shouldn’t be afraid to send my child to school.”

The sound of drums, tambourines and call-and-response chants rippled through the crowd of thousands of students, parents and grandparents and echoed off the buildings of Broadway’s theater district.

The worldwide day of action was sparked by student activists who have pushed lawmakers to forgo campaign contributions from the National Rifle Association and enact stricter gun control laws after the Feb. 14 shootings in Parkland, Fla., which killed 17 people.

In the thick of the march on Broadway, a group of teenagers that included Myles Pincus, 15, carried a long banner adorned with red handprints that read, “NRA has blood on its hands.”

“I’m sick of being scapegoated as troubled youths,” Pincus said. “Guns are the problem.”

Many teenagers said they looked forward to turning 18, when they could vote for candidates that will support national gun control measures.

California election officials staffed a booth where adults could register to vote, and 16- and 17-year-olds could pre-register. The initiative, which activates teenagers’ voting eligibility when they turn 18, has pre-registered more than 88,000 people since its launch in 2016.

Sheva Gross, a child development professor at UCLA, came to the march with her daughters Talia, 8, and Flora, 11. Gross carried a sign adorned with peace signs that read, “I’m so mad, I can’t even think of a slogan.”

The girls have gone through lockdown drills at their Culver City elementary school that make them nervous, Flora said. She added: “To not come home again, like, ever — it’s overwhelming.”

Gross was in the classroom with future teachers and child welfare workers 15 minutes after the San Bernardino massacre and an hour after the Parkland shooting. She said the fear in her students’ eyes was evident.

“They grew up with this, and they’re terrified,” Gross said, breaking into tears. Flora hugged her.

Retired school principal John P. Johnson and his wife, Margy, came from Corona to march for their 13 grandchildren. Johnson, who knows the AR-15 well from his time in the U.S. Navy in Vietnam, held a sign that read: “Veterans against assault weapons.”

“There is no reason to purchase an AR-15 here or anywhere in the world,” Johnson said. “It’s used for the battlefield. The bullets kill within seconds.”

Brianna Cornejo-Perez, a 14-year-old student at Santa Monica High School, came to the march with her mother, a former teacher. A fellow student in Santa Monica had posted a Snapchat photo of himself holding a gun, making fun of gun control and the Parkland shootings, unnerving her.

“We used to have lockdown drills — now we have active shooter drills,” Cornejo-Perez said. “It’s a bit scary.”

Cornejo-Perez and her mother said they support school psychologists, anti-bullying campaigns, and other resources for kids who don’t fit in, rather than armed security guards or police officers.

Giselle Jimenez, 17, of Alexander Hamilton High School, held a sign reading, “Silly me, I didn’t know that not wanting kids to be slaughtered by assault rifles was being political.”

She called for stricter gun control and for adults to take students like her seriously.

“A school shooting could happen anywhere,” Jimenez said. “The next victims could be me, my sister, any one of my friends.”

US News
Trump’s base starting to erode in California, new poll shows
80 views

US News
Tampa teen arrested in hack of Twitter accounts of Obama, Bill Gates and others
103 views

US News
Who will get the first shot when the coronavirus vaccine arrives?
257 views

US News
Results from COVID-19 vaccine trial may be ready by November, health officials say
336 views