Some Democrats think Parkland-fueled activism can neutralize the NRA 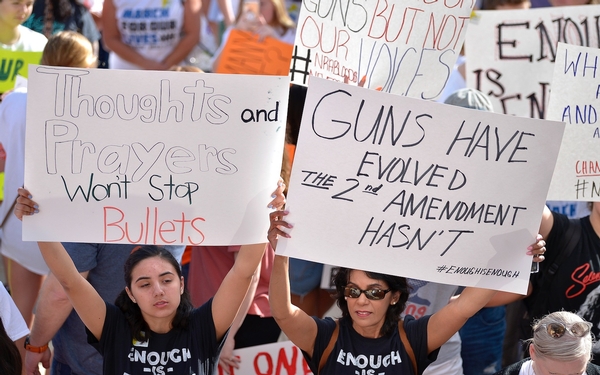 Sean Casten remembers that shortly after he announced his campaign for Congress last year, a Democratic friend told him he had better avoid talking about gun control or risk an “onslaught” from the National Rifle Association.

“Thank you, thank you, thank you to the kids in Parkland,” said Casten, now the Democratic nominee in a battleground suburban Chicago House race who — in a break from his party’s recent past — supports an assault-weapons ban.

“Politically, I feel extremely fortunate that they basically made it possible for someone like me to say I’ll be honest and open with my positions and can still fend this off,” he said.

Last month’s mass shooting at Marjory Stoneman Douglas High School — and the outspoken activism of its surviving students — has produced a once unthinkable shift in the public’s view of gun control, according to an array of polls. And now, Democratic candidates such as Casten are racing to take advantage, convinced they can harness the boom in enthusiasm for new gun laws to grow their campaigns and defeat their Republican opponents.

Already, they’ve used the issue to raise money and recruit volunteers. They’ve been emboldened in their agenda, proposing farther-reaching legislation. In some cases, the candidates have even used the issue in early campaign ads against their opponents.

“It’s really clear gun safety has emerged as a defining issue for the 2018 midterms,” said Isabella James, political director for Giffords, a gun-control advocacy group that takes its name from former Democratic Rep. Gabby Giffords, who in 2011 survived a gunshot wound to the head.

Even recently, most Democratic candidates have hesitated to make gun control a primary issue in their campaigns. Measures such as expanding background checks benefited from broad public support, but a small and dedicated group of opponents — often mobilized by the NRA — often proved more politically influential.

Democratic candidates are showing less restraint now. In one key Colorado House district, for example, Democratic candidate Jason Crow used the first digital ads of his campaign to criticize GOP Rep. Mike Coffman, accusing him of taking money from the gun lobby while offering nothing more than “thoughts and prayers” to victims.

Another Democratic candidate, Debbie Mucarsel-Powell in Florida’s 26th Congressional District, highlighted her father’s death by gunshot in her own first political ad last week, turning the tragedy into a call for stricter gun control. A raft of other Democrats, including California contenders such as Katie Porter in Orange County, have asked supporters to sign online petitions to “demand action” on gun laws.

Party operatives say the importance of these ads is primarily to attract the support of gun-control activists, who can provide crucial on-the-ground enthusiasm and resources for campaigns. That’s especially true for Crow and Macarsel-Powell, both of whom face primaries before they can move on to the general election.

“It’s more just using it as a tool to bring new names and new volunteers and new donors into campaigns,” said Ben Pollara, a Miami-based Democratic strategist. “Because other than Donald Trump, it is the single greatest rallying cry for Democrats right now.”

Polls have shown a marked increase in support for gun control since the Stoneman Douglas shootings. An Associated Press-NORC Center for Public Affairs Research poll from March found that 69 percent of Americans supported stricter gun laws, an eight-point increase since October. Democrats familiar with the party’s internal polling say they’ve seen a similar bump in support.

Even some Republicans have re-calibrated in the wake of the Florida tragedy, with GOP Rep. Brian Mast announcing in February he would support a ban on assault rifles.

Public opinion has changed so quickly, in fact, that some Democrats caution they don’t even know how the issue will play out in eight months, when the midterm elections arrive.

“The numbers have shifted so rapidly on a lot of this stuff, folks are still trying to figure out where the center is,” Pollara said.

Many Democratic strategists still caution that despite the surge in interest in gun policy, the party is still best served by focusing most of its attention on pocketbook issues like health care. (“If you’re going to hold me to one issue, I pick health care,” said one Democratic strategist, granted anonymity to speak candidly.) Others suggested that gun policy could be folded into a broader critique of GOP lawmakers, saying that the inability to pass broadly popular changes to the law is another example of dysfunction in Republican-controlled Washington.

And a more restrained position on guns still has evident political benefits for Democrats running in conservative areas: Conor Lamb won a special election this month in a conservative southwest Pennsylvania congressional district after rejecting calls for an assault-weapons ban.

Democrats in Washington view Casten’s race in Illinois” 6th Congressional District is a top pickup opportunity, one of many suburban-heavy districts across the country that has swung in the party’s direction since Donald Trump took office. He takes on Republican Rep. Peter Roskam in a race independent analysts rate as a “toss-up.”

Casten said he’d likely have run on a strong gun control agenda regardless of the tragedy in Florida. Now, however, he has a lot less reason to worry about it.

“The Parkland kids have made it a much safer strategy to do what I was going to do anyway,” he said.