Faced with complaints of filth and blight, LA cracks down on overnight RV parking. 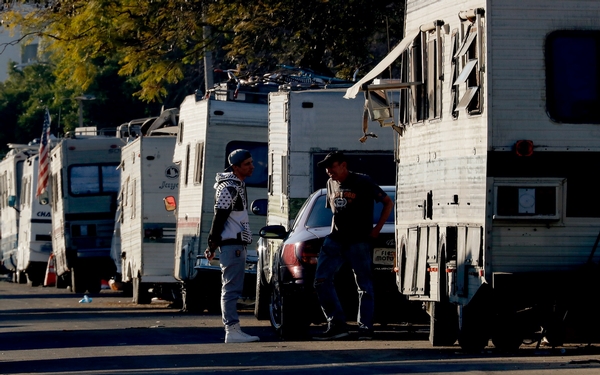 People stop and talk along a collection of RV's on W. 94th Street near Los Angeles International Aiport in an area that had become a community, on February 13, 2018. (Luis Sinco/Los Angeles Times/TNS)

For a while, Vincent Neill and his family parked their weathered RVs on a stretch of roadway in Canoga Park, where the kids had friends down the street.

But then business owners began to complain, he said. So Neill, his wife and their seven children relocated their caravan of vehicles to a Chatsworth manufacturing zone.

Then a new set of signs went up on that curving street, banning bulky vehicles from parking there between 2 and 6 a.m.

“We got evicted by the red zone,” Neill said.

So the family moved again, this time to another industrial street about a mile away. And Neill said others soon followed: By February, as many as a dozen RVs were regularly stationing themselves on a single block of Irondale Avenue, a nagging frustration to nearby businesses and a stark reminder of a simmering crisis.

As dilapidated campers have become rolling homes for the destitute, they have become another battleground over blight, nuisances and the rights of the poor in Los Angeles. Facing complaints about trash, clogged roads and other hazards, the city has banned them from remaining overnight on street after street, but has often ended up merely moving the problem.

Across Los Angeles, it was illegal to live in a vehicle until a federal court struck down that citywide ban four years ago. L.A. then passed a new law that barred vehicle dwellers from spending the night near homes, parks and schools, but allowed them to park and sleep on a scattering of streets in industrial and commercial districts, marked in green on city maps.

But even those roads can be off-limits if the city has posted street-by-street signs banning overnight parking. More than a year after the new law went into effect, the City Council has gradually clamped down on where RVs — the most obvious manifestation of people sleeping in their vehicles — can legally park for the night.

A Times analysis found that since the ordinance was approved, lawmakers have voted to ban “oversize vehicles” from parking overnight on more than 300 street segments from Chatsworth to San Pedro. Some of the banned areas only span a short block, while others extend as long as three miles.

Not all of the new restrictions have been triggered specifically by RVs. Many areas with new limitations on parking were already prohibited for vehicle dwellers. But lawmakers say that the rise in homelessness — and people living in their vehicles as a result — has helped drive the demand.

Scores of streets have gotten new signs in the San Fernando Valley neighborhoods represented by Councilwoman Nury Martinez, who voted against the new law allowing parking in commercial and industrial areas.

“It’s easy to stand up and say, ‘Allow people to live in their cars,’ when the issue is not going to be as prevalent in their district as it will be in mine,” Martinez told the Daily News.

Businesses and residents have frequently pushed for such rules, complaining that commercial and industrial streets have been inundated with bulky vehicles. The council has also imposed street-by-street restrictions in some areas that ban vehicles of all sizes from parking overnight.

At a recent meeting at City Hall, Chandra Mosley and other members of the View Heights Block Club pleaded for new restrictions on trucks and RVs parking in their South L.A. neighborhood. Mosley said that the street across from her church had become an eyesore over the last year, cluttered with trash and sewage dumped by people living there in campers and buses. Some neighbors have seen drug deals as they pass, she added.

“Even walking down the street to pick up my newspaper I’m getting complaints,” said Councilman Bob Blumenfield, who represents neighborhoods in the western San Fernando Valley including Woodland Hills and Canoga Park. “We don’t want our neighborhoods to become campsites.”

But simply banning RVs on more and more streets is “untenable,” Blumenfield said.

Los Angeles has been slow to provide “safe parking” locations for people living in RVs and other vehicles to legally spend the night.

So when the signs go up, the blocky vehicles sometimes move just a few streets away, spurring complaints from a new set of neighbors. That was what happened when new signs went up on some streets in Chatsworth, including the curving road where Neill and his family had once parked.

“When they cleared them out over there, they all landed over here,” said Michelle Jurgaitis, general manager of Classic Cosmetics Inc., which abuts Irondale.

Jurgaitis said she felt for families living in the RVs, but lamented that some vehicle dwellers had strewn the business’ property with needles and excrement. Workers have had to park far away in the early morning because the street was lined with boxy vehicles, she said. And Jurgaitis said the small shop on their manufacturing site had been losing customers.

Irene Shaffa, who owns another nearby business, said workers had become fearful of taking walks at lunchtime, and waited to make sure everyone was picked up safely before they left. The shabby state of Irondale had even spurred her company to fly employees out of state for important meetings.

“We deal with a lot of major corporations and we will not bring them to our warehouses. … It’s embarrassing,” Shaffa said last month.

Neill said that when he first moved his RVs onto Irondale, it was empty and tranquil, just his family and a woman parked down the street. But other RVs followed and some of their occupants were “bad news,” the 45-year-old Neill said. He worried about the men who sat around drinking or dumping sewage in the gutters. Tools and other belongings had been stolen from his family, Neill said.

“Once you get to a good location, all the riffraff moves in behind you,” he said.

Last year, real estate broker Scott Caswell gathered hundreds of signatures on a petition urging Councilman Mitchell Englander to address “blight, unsanitary conditions, property theft and business disruption” in the area. Caswell said that some businesses in the industrial area had threatened to move or demanded more security as it became a de facto RV park.

“It just became horrible out here,” Caswell said. In one case, he said, a nearby building on Nordhoff Street was broken into while it was being sold and stripped of copper wiring. “We’ve got to solve the problem. We can’t keep pushing it around.”

Before the new rules went into effect across the city, many council members had already declared specific areas off-limits to RVs or other vehicles to park overnight.

Beyond the city limits, some neighboring cities impose stiffer restrictions than Los Angeles: Calabasas, for instance, allows oversized vehicles to park on public streets only if they get a parking pass that lasts up to 72 hours — and the temporary passes are only meant to allow residents and their out-of-town guests to park next to their own homes or businesses.

As more and more streets are off-limits to RVs for overnight parking in Los Angeles, only a few religious congregations are now hosting “safe parking” programs in their lots.

The Los Angeles Homeless Services Authority put out a call last year for nonprofits to operate such programs and provide vehicle dwellers with supportive services, but did not get any eligible proposals. Agencies said they weren’t able to take on a new kind of program, authority spokesman Tom Waldman said.

Frustrated that little has happened, Councilman Mike Bonin has called on the city to examine which of its own properties could be offered up for such programs.

“The city should have moved faster,” said Bonin, who represents coastal areas. “What I hear from folks is, ‘We’re willing to do it, but if the city is really interested, why isn’t the city doing it themselves?’”

Early in March, the number of RVs had dramatically dwindled on Irondale, with only a handful remaining on a cool and sunny morning.

Down the street, there was a new sign banning overnight parking on the entire block. It had been installed in late February, part of a new set of restrictions backed by Englander.

The street-by-street rules are meant to protect economic growth by preserving one of the few remaining “light industrial” zones in Los Angeles, said the councilman, who has also raised concerns about unsafe and unsanitary RVs being rented out to the poor.

Englander added that he was working with local groups to establish a “safe parking” program in his district, but it is unclear exactly when that will happen.

After the new signs went up, Neill and his family were nowhere to be seen on a March morning on Irondale. One of his former neighbors said they had just moved to a nearby street.

“My next move is to the desert, once they move us out of here,” said Dave Weber, a 60-year-old who said he had started living in his RV after he had brain surgery and lost his job as a truck driver. He used to park in Granada Hills, he said, before new signs went up there. “It’s probably only a matter of time.”