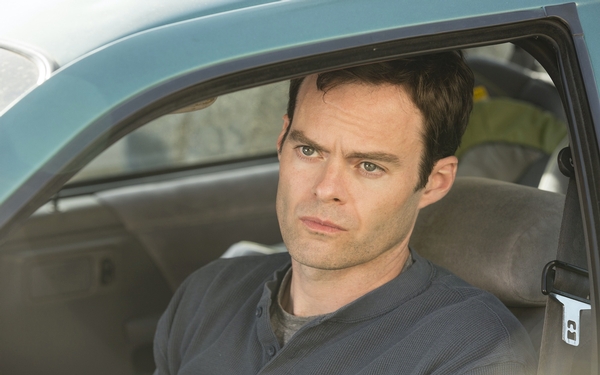 In “Barry,” which premiered Sunday on HBO, Bill Hader plays Barry Berkman, a veteran of the war in Afghanistan working out of Cleveland as a freelance contract killer.

Created by Hader and Alec Berg (“Seinfeld,” “Silicon Valley”), it has something in common with Danny McBride’s HBO comedies “Eastbound and Down” and “Vice Principals” in how it makes a hero out of an adult in a state of sometimes dangerous arrested development. But Hader’s character is more complex and less self-involved — he barely has a self, it seems at times. Half weary grown-up, half innocent child, he’s shaped by Hader into a plausible single person.

The show is similarly binary: silly and engaging, sunny and dark. It’s funny where it wants to be and sometimes isn’t funny at all.

Barry is repped, to use the appropriate show business term, by Fuches (Stephen Root), an old family friend whose cure for Barry’s post-military depression was to get him back killing people — for money. Fuches, who takes a large agent’s cut, calls this Barry’s “purpose.” But Barry, who has grown less sure of this, has lapsed back into depression and isn’t sleeping.

Fuches books Barry for a job with a Hollywood-based Chechen mobster (Glenn Fleshler), which takes them out of the familiar dun of the Rust Belt to the disorienting brightness of Southern California. In following his target, Barry stumbles into an acting class run by Henry Winkler’s Gene Cousineau, where he is taken for a student and begins to think his life could change.

“I was really good,” Barry reports to Fuches of his accidental time onstage (he wasn’t really), “and afterwards I hung out with all them … They made me feel really good about myself.”

“You’re a killer, you kill the bad guys,” Fuches replies. “This is what you do, this is all you do.” (The point where Fuches taking care of Barry becomes taking advantage of Barry is not always clear.) Circumstances play a part — it’s a tightly plotted series — as small slips lead to big problems and bad things lead to worse ones.

Unlike other hoods-go-to-Hollywood stories — “Get Shorty,” for example, whose second season as a television series is on the way, or the straight-faced “Ray Donovan” — “Barry” is not about power but dreams. Nobody here is living in a Case Study house in the hills. Berg and Hader playfully mock the student actors’ self-involvement without becoming condescending. (Says one student actor, “I did one of those online quizzes to find out whether I was living in a bubble or not, and it turns out — I am.”) The classmates are competitive yet supportive; “generous” is their compliment of choice.

But other characters have creative impulses too. A mobster has been “workshopping” a threatening message; a man whose job is cutting people up finds himself standing on a stage and begins to sing; a detective slides a “bust mix” CD into his car stereo (though he has mistaken Rimsky-Korsakov’s “Flight of the Bumblebee” for Wagner’s “Ride of the Valkyries”).

A jovial soundtrack signals comedy; that each episode comes with a chapter heading suggests we are to take it seriously. (The titles are acting-class dictums: “Make the Unsafe Choice,” “Listen With Your Ears, React With Your Face,” “Know Your Truth.”) Most of the time in “Barry,” no one is killing anyone, or being beaten up or tortured. But there are violent scenes and tragic ones.

Much that occurs, among the acting class, the mobsters and the police, is absurd, but Barry’s pain and hope and yearning are real enough. We feel for him and fret for him and wonder what sort of happy outcome there might be for a hitman in the straight world. The happy, guilt-free future life he pictures himself living with acting classmate Sally Reed (Sarah Goldberg) is assembled from scraps of pop culture; ordinary life is beyond his imagining.

He’s not an antihero, as we have come to know them (all too well) on TV. He wins only insofar as he becomes a better person — and we want him to win. Indeed, apart from the questions of who might be killed or might be caught, the suspense hangs on whether Barry might become a good actor, which is also to ask will he find himself? It’s a question of soul, not of mere material success.

In part, “Barry” is a study of a life spent following orders, of being tossed on the waves other people make. Barry is torn between an old mentor and a new, but where Fuches has a vested interest in keep Barry working, Cousineau wants him to look inside himself to find himself. “You are deferential to every character in a scene,” the teacher observes.

Winkler, whose career as of late has included recurring roles on “Parks and Recreation,” “Arrested Development” and “Childrens Hospital” — Fonzie feels so long ago — is very funny as Cousineau, a marginal Hollywood figure who makes restaurant reservations under the name Neil Patrick Harris because “I find I get a better table that way.” Cousineau gets his own connected thread here, romancing Paula Newsome’s Det. Moss. Newsome does lovely work here. Indeed, the cast is universally fine and notably also includes D’Arcy Carden (Janet on “The Good Place”) among the student actors and Anthony Carrigan (“Gotham”) as NoHo Hank, a particularly cheerful Chechen mobster.

As followers of “Saturday Night Live” and “Documentary Now!” know, there are a lot of people inside Hader. Tall and lanky with a boyish face, he can turn hard as necessary, sweet in a complicated way; there is something about him that recalls leading men of the 1930s and ‘40s, like a cross of Henry Fonda and James Stewart. He’s given himself a good part here, satisfying in its eight-episode arc but with room to grow if a second season follows. Fingers crossed.