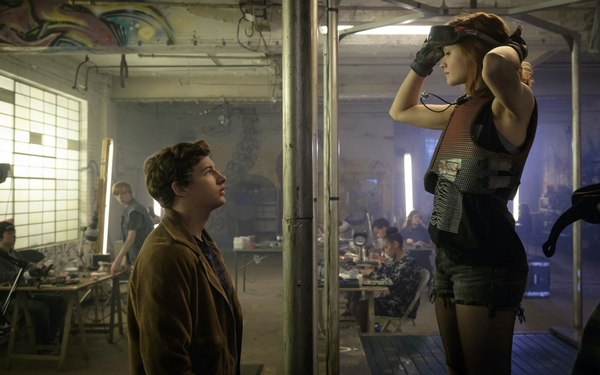 Steven Spielberg was a gamer before there was a name for such a thing, and he has the stories to prove it.

He can tell you about playing Pong in 1974 on Martha’s Vineyard with Richard Dreyfuss during the filming of “Jaws.” Years later, when he was making 1982’s “E.T.,” he had a Missile Command arcade cabinet hauled to the set because he was obsessed with trying to score more than a million points. “I was determined to break the bank before we wrapped the movie,” he remembers. “That was the race for me.”

Combine that abiding love of video games with Spielberg’s deep association with the 1980s — a decade that cemented his reputation as Hollywood’s preeminent hitmaker — and he seemed fated by the movie gods to direct the big-budget adaptation of Ernest Cline’s best-selling 2011 sci-fi novel “Ready Player One,” which opens Thursday.

Set in a dystopian near-future where people spend much of their lives in a virtual-reality realm called the Oasis, “Ready Player One” centers on a high-stakes digital treasure hunt in which contestants search for ’80s-pop-culture-inspired Easter eggs left behind by the brilliant creator of the Oasis, James Halliday. Mash together “Willy Wonka & the Chocolate Factory” and “The Matrix,” add eye-popping action sequences and countless retro references to ’80s and ’90s totems and you’re in the ballpark of the film, which stars Tye Sheridan, Olivia Cooke, Ben Mendelsohn and Mark Rylance.

For Cline and his co-screenwriter, Zak Penn, Spielberg — who cast his own Halliday-like influence over the childhoods of anyone who came of age in the 1980s — was the dream director to helm this paean to geek culture. “Someone asked us, who was our second choice?” Penn says. “It was nobody followed by nobody. I mean, once you have him, everything else seems wrong.”

More than the Reagan-era pop-culture nostalgia, though, it was the story’s deeper themes and its timely exploration of the promise and peril of our digital age that drew in Spielberg. “I always say about this movie that the story is out the front windshield and the nostalgia is out the side windows,” says the director, who is just three months off the release of his best picture-nominated Pentagon Papers drama “The Post.”

“For Steven, it’s a question he deals with on a daily basis in his life with his wife and his family: Would you rather be online or would you rather live in the real world?” says Spielberg’s longtime producing partner, Kristie Macosko Krieger. “At the end of the day, that’s sort of what it’s all about.”

On a recent afternoon, Spielberg, 71, and Cline, 45, sat down to discuss the challenge of bringing Cline’s ambitious book to the screen, the lure of nostalgia and the future of virtual reality.

Q: Steven, you’ve said that when you first read the script for “Ready Player One,” you loved it but your initial gut reaction was that a younger filmmaker should probably direct it. Why?

Spielberg: I just saw how hard this was going to be. This is the third-hardest movie I’ve ever made behind “Jaws” and “Saving Private Ryan,” in that order. I was exhausted thinking about what was ahead of me if I committed to it, and I thought, “Well, maybe a director in their 20s wouldn’t be as intimidated because they would have no experience to intimidate them.” Yet I was so enthralled by the possibilities that I just said, “Well, if I get into trouble, I’ll just go to one of my younger director partners and have them come help me.”

There were a couple of times, I must say, where I would wake up in the morning and say, “I can’t believe I’m going to get out of bed and work on this movie today because I think I need 24 hours of sleep.” A couple of times I almost called J.J. Abrams, who’s one of my closest friends, to say, “Hey, why don’t you come over to England and shoot some second-unit for me?” But I didn’t. I realized I just needed a nice cup of hot tea and I needed my wife (actress Kate Capshaw) to give me some encouragement, and then I got to the set.

Q: Yet somehow, even while you were working on “Ready Player One,” you managed to also film “The Post,” which couldn’t be a more different movie. How did you pull that off?

Spielberg: I had locked my final cut on “Ready Player One,” and I was required once a week to spend three hours with (Industrial Light & Magic) on a Skype call (to review the film’s visual effects). In that small window when my time was only going to be needed on “Ready Player One” once a week, that’s when I read Liz Hannah’s first-draft screenplay (for “The Post”). It spoke to me. There was an urgent contemporary political message in the material, and I thought I would not be taking anything away from “Ready Player One” if I jumped into this right now.

But look, among my favorite directors is William Wyler, who never came out of the same hole twice. I’ve always admired those directors who were able to so totally reinvent themselves stylistically. To be able to go from “Mrs. Miniver” to “Ben-Hur,” to go from “The Big Country” to “Funny Girl” — those were the directors I admired. I basically lit candles to the directors that I couldn’t pigeonhole. I’ll never be as good a director as William Wyler, but to be eclectic like he was — that was always something I wanted.

Q: Ernie, what does it feel like for you to have this filmmaker who was one of the key architects of your childhood now adapting your novel?

Cline: It’s really hard to articulate. I feel like I’m a testament to what happens when you celebrate the things you love kind of unabashedly. When I wrote “Ready Player One,” it was like building a bonfire or a searchlight announcing, “Here’s what I love and here’s why I love it — and don’t you love it too?” And by doing that, I’ve managed to draw the very people who inspired me to write the story to collaborate with me.

They say, “Be bold and powerful forces will come to your aid.” And that’s what’s happened.

Q: Steven, you and your films are name-checked throughout the book. You’re not known for including a lot of winking nods to your own past work in your movies. So how did you navigate that?

Spielberg: When I was first given the script by Warner Bros., I said, if I determine to take the leap, I’m going to have to cut out at least 70 percent of my own cultural references. Because otherwise it’s going to be like primping in front of a mirror, and I’m just not going to let myself do that.

I pride myself on my modesty. But I was part of the ’80s, and I know that. I’m objective enough about my own work and about the past to know that it would be a sin to cut out the DeLorean (from “Back to the Future,” which Spielberg produced) and the T. Rex (from “Jurassic Park”) and maybe a few other things that came from my movies. So I left about 20 percent of them in from the book.

Q: Particularly for anyone who grew up in the ’80s, “Ready Player One” is steeped in nostalgia for the pop culture of that time. But there’s an argument that Hollywood is already too fixated on nostalgia, with endless remakes and reboots, and that constantly mining the past can be a creative dead-end. What do you say to that?

Cline: Well, that’s what I love about “Ready Player One” — it’s not a remake or a reboot. It takes all of that culture and it tells a new story.

When I was writing “Ready Player One,” I thought of the pop culture as being similar to the mythology in the “Indiana Jones” films. You may not know too much about the Holy Grail or the Lost Ark or how much of that is true, but you know enough to know who the good guys are and who the bad guys are and who you’re rooting for. I never felt like the plot of “Ready Player One” hinged on coming in with any knowledge. The story still works on its own.

Q: Do you share the book’s nostalgia for the ’80s? Or is your personal pull toward your own childhood?

Spielberg: My childhood is the ’60s. I love the era of the Beatles and the Stones and the birth of a Civil Rights movement that changed the world. That’s where I return usually. But the ’80s was the era of my first really big successes in terms of “Raiders” and “E.T.” and the films I made then. And it was the most fun-loving decade I remember. It wasn’t a cynical decade at all. The economy was relatively stable, and things were relatively calm. And we had an actor as president. (Laughs)

Q: As fun as it aims to be, “Ready Player One” presents a pretty bleak vision of a future in which the world has descended to such a state of collapse that people can only find satisfaction in virtual reality. How plausible do you think that is?

Cline: I worry that we’re already there. So many people spend so much of their time online. I think that already the real world suffers from neglect due to the amount of entertainment that we have. Every movie, every song, every piece of art — everything that can be digitized, you have instant access to on the Internet. It’s easy to escape into escapism now more than ever. So for me, it’s about striking a balance.

Spielberg: I think in the future VR is going to be the super drug. The message of the film is simply, it’s your choice. Where do you want to spend the majority of your time? Do you want to spend it with real people in a real world, which is often harder than spending it in a virtual world where you can be the person you always wanted to be — where the id becomes the self? Is that a world you really want to live in for the rest of your life?