Three new food shows to binge watch, and one new radio show too 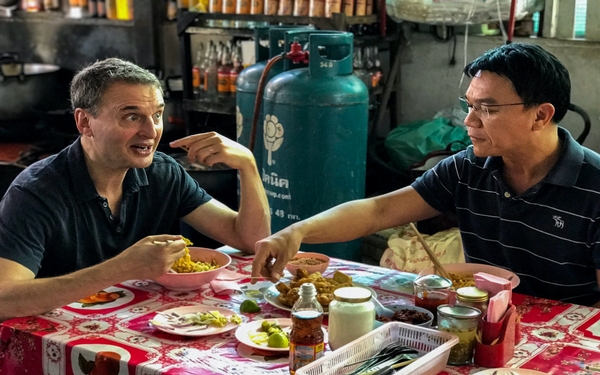 “Somebody Feed Phil” on Netflix

Phil Rosenthal is best known for creating the show “Everybody Loves Raymond,” though he does have some cred in the food world. He was the host of the PBS food show “I’ll Have What Phil’s Having.” He is an investor in multiple Los Angeles restaurants, including Pizzeria Mozza. And his Instagram feed scrolls like a respected food blogger’s. This guy eats really, really well.

When he arrives in Israel, New Orleans or Saigon in “Somebody Feed Phil,” he does so with the wonder and excitement typically associated with a kid on Christmas morning. In Israel, he visits a shakshouka specialist. In New Orleans, he devours a basket of fried chicken at Willie Mae’s. There’s no attitude, no preconceived notions. And you’re not left feeling like you’re trying to catch up with an elitist host.

There is plenty of good food, insightful guests and as an added bonus, Rosenthal’s parents. He makes Skype calls to them from his different destinations — bad jokes, miscommunication and hilarity ensue. This is a food show for foodies (please excuse the use of the word), travel junkies and people just looking to be entertained. You don’t have to have watched every episode of Netflix’s “Chef’s Table” to enjoy it, or know what Noma is. It’s there to entertain, give you a couple places to visit on your next trip to wherever someone is feeding Phil and make you hungry.

All episodes of “Somebody Feed Phil” are streaming on Netflix.

In the past decade, chef David Chang has become a household name, as the chef behind the Momofuku restaurants, the too-short-lived food magazine “Lucky Peach” and as NBC’s official guide to Korean food at the recent Winter Olympics. He’s also the star of Netflix’s latest food series “Ugly Delicious.” Because it’s a Netflix show, it’s beautifully shot and scored. And there’s a budget that allows Chang and his food writer co-host Peter Meehan (with whom he started “Lucky Peach”) to travel around the world in search of tacos.

The show breaks the mold of host-goes-here-and-eats-this and instead, focuses on a single food (tacos, pizza, fried chicken) where it came from and who is making it. Chang is an enthusiastic host, and has a propensity for finding Asian food parallels to just about everything. The tacos camarones at Marisco Jalisco? “It’s like har gow,” he says.

What’s impressive is the sheer amount of information and destinations packed into every segment. And how insanely jealous you’ll become by the time the closing credits roll. In the “tacos” episode, Chang travels to Copenhagen to eat tacos with former Noma pastry chef Rosio Sanchez. Meehan travels around Mexico eating more tacos. It’s enough to make you want to charge the screen. The show is fun and informative in the way that it zigzags between countries and cultures. And the L.A. cameos are pretty impressive too: Gustavo Arellano, Evan Kleiman, and our own Pulitzer Prize-winning restaurant critic Jonathan Gold make appearances, to name a few.

All episodes of “Ugly Delicious” are now streaming on Netflix.

“The Burger Show” on First We Feast

You could argue that chef Alvin Cailan is the obvious choice to host a web show about burgers. He’s best known as the chef who started Eggslut, the egg sandwich phenomenon at Grand Central Market that now has multiple locations in Los Angeles and one in Las Vegas. He fashioned burgers for a pop-up concept in Chinatown called Easy’s. And he just finished a residency at the Chefs Club Counter in New York City, where he made, you guessed it, burgers.

Rather than adhering to a strict formula, the show takes inspiration from just about every Travel Channel and Food Network show, and a couple of internet memes as well. Cailan plays host and chef at times, recreating Shake Shack and In-N-Out burgers before he discusses the merits of each; breaking down gourmet burgers with Adam Richman; and traveling to Jersey City to eat White Mana burgers with “Top Chef” host Padma Lakshmi.

Like we said, it’s all over the place. But at runtimes around 10 minutes, it’s more of a fun snack than a full show. And yes, you’ll be in the mood for a burger afterwards.

You can view episodes of “The Burger Show” at www.firstwefeast.com

“First Date with Will Guidara” on SiriusXM

This is a show for serious, inside-baseball food lovers, or at least fans of NoMad, Eleven Madison Park or any of Will Guidara and chef Daniel Humm’s restaurants under the Make it Nice hospitality umbrella. If your answer to the question “if you could have dinner with anyone dead or alive, who would it be?” tends to lean toward Julia Child, Paul Bocuse, Marco Pierre White or Roy Choi, this is the show for you.

Picture you’re a fly on the wall during Guidara’s first date with some of the city’s most influential food people. They sit at a table and talk about everything from their favorite burgers to what it’s like being a first-time parent, and you, the listener, eat it up.

“We’re doing this show because we want to get to know our new home through the eyes of people who live here,” says Guidara on the show. So he asks guests like Jon Shook and Vinny Dotolo (Animal, Son of a Gun) where they are from, how they knew they wanted to go to culinary school, and what their favorite L.A. burgers are. Things also get weird, in a good way.

Guidara has his guests play what he calls ‘90s pop culture trivia with Jeff Tascarella, director of operations at NoMad in Los Angeles, who happens to know more about ‘90s pop culture than most. Can you name the butler on “The Fresh Prince of Bel-Air?” Tascarella can.

Guidara has already had Curtis Stone of the L.A. restaurants Maude and Gwen on. And Gold will be on an upcoming episode as well.

Special Features
We tried more than 25 alternative proteins. These were the best (and worst)
1,477 views

Special Features
One-pot wonders: These dishes offer all the flavor but without all the cleanup
648 views

Special Features
‘Cuban’ beer is being sold in Miami. Is it a communist invasion or clever capitalismo?
333 views

Special Features
What is cacio e pepe and how did it take over the world?
321 views

Special Features
The bubble tea breakdown: What to order, and a toppings explainer
375 views

Special Features
The cicadas are here. So, of course we had to taste them with Old Bay.
566 views
bid=||