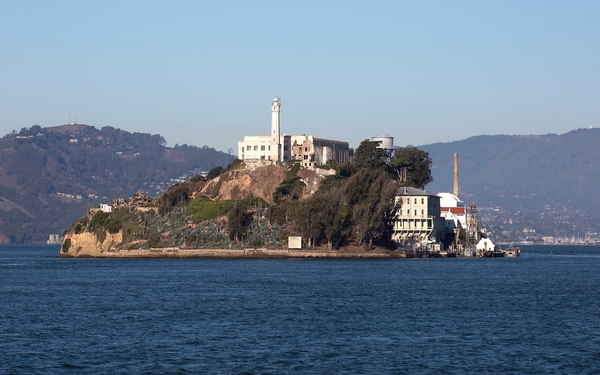 Reflecting the underside of society, prisons aren’t generally a pleasant topic of conversation. Many question whether the nation’s nearly 5,000 penitentiaries do more harm than good in reducing crime. Nonetheless, prisons have been with us throughout our history, serving at best to protect society from its miscreant minority.

Prisons are a source of great intrigue — no doubt with the exception of those who’ve spent time behind bars. It is fascinating for us on the outside to imagine what life would be like if stripped of our dignity and basic freedoms.

Read on to learn a bit about eight historic American prisons, all open to some extent to the public, and each with its story of notorious inmates, murder and mayhem. Most of these slammers offer tours that provide a glimpse of prison life — and perhaps even a newfound appreciation for our own freedom.

Known as “The Rock,” owing to its location on a barren 22-acre island in San Francisco Bay, Alcatraz arguably is America’s most famous prison. Established as a U.S. Army fortress in 1850, it became a military prison in the 1860s and eventually served as a federal maximum-security prison from 1934 to 1963. It housed a rogues’ gallery of criminals over the years, including Al “Scarface” Capone, George “Machine Gun” Kelly, Alvin “Creepy” Karpis (the FBI’s first “Public Enemy”) and Alaskan murderer Robert “Birdman” Stroud. “The Rock” has been featured in nearly a dozen movies, including the 1962 blockbuster “Birdman of Alcatraz” starring Burt Lancaster as Stroud. Now operated as a unit of the Golden Gate National Recreation Area, Alcatraz welcomes visitors daily via a ferry from San Francisco’s Pier 33.

Folsom is best known in popular culture for a concert performed at the prison in 1968 by Johnny Cash whose chart-topping album “At Folsom Prison” was recorded live at the event. In reality, the longer history of this granite-walled maximum-security lockup, located just northeast of Sacramento, is a grim one. Dating back to 1880, California’s second oldest prison has recorded 93 executions, countless escapes and numerous bloody riots. Charles Manson, Hell’s Angel leader Sonny Barger and Black Panther Eldridge Cleaver have ranked among its notable inmates. Visitors can peruse the prison museum, housed in historic House No. 8, where a fascinating range of exhibits is displayed, including a mock cell, confiscated weapons, prisoner-made handicrafts and a roomful of Cash memorabilia.

On July 1, 1876, the first seven inmates entered the Territorial Prison at Yuma and were locked into the new cells they had built themselves. Thus began the legend of the old stone and adobe lockup where a total of 3,069 prisoners, including 29 women, lived within the walls during the prison’s 33 years of operation. Among the inmates here were some of the Southwest’s most hardened criminals — a motley bunch of gunslingers, stagecoach robbers and even a few Mexican revolutionaries. Today’s visitors can enter the prison’s cells, climb the old guard tower, explore the prison cemetery, take a mug shot in the museum and load up on prison gear at the gift shop.

One of the largest and most authentically preserved of America’s historic prisons, the Old Idaho Pen is an impressive ensemble of 30 buildings and special exhibitions now designated as a National Historic District. During its 101 years of operation (1872-1973), the distinctive Romanesque-style sandstone complex received more than 13,000 inmates. Among them, according to one of the early wardens, were “rustlers, cutthroats, murderers, bounty hunters, desperadoes, mugs, pugs, thugs, nitwits, dimwits, vipers, con men, Indian Agents and Mexican bandits …” Today’s visitors can relive the Old Pen’s exciting past of daring escapes, scandals and executions on a tour that takes in the solitary confinement unit, cell blocks and the gallows.

Built by convict labor and opened in 1871, Old Montana was the first territorial prison in the United States. The gray sandstone walls of this immense structure are 24 feet high and buried 4 feet deep to prevent escape by tunneling. The last prisoners were moved in 1979 after which the facility was opened to the public. Visitors can tour the enclosed courtyard where inmates exercised, walk through their austere cell blocks and feel the isolation of maximum security cells. The visitor-friendly complex also includes four museums — the Powell County Museum, Frontier Montana Museum, Montana Auto Museum and Yesterday’s Playthings.

Founded in 1836 and at one time housing more than 5,200 inmates, MSP is one of the oldest and largest penitentiaries in America. Following its closure in 2004, the 47-acre complex was refurbished and reopened for tours. “Visitors are fascinated by the facility’s rich 168-year history and the stories of infamous prisoners once housed there,” says Sheila Sanford, MSP tour coordinator. Among those infamous inmates: gangster Charles “Pretty Boy” Floyd, former world heavyweight boxing champion Sonny Liston (who learned the sport as a prisoner) and James Early Ray, who escaped MSP just months before assassinating Martin Luther King Jr. Tours lead visitors through the prison control room, cell blocks, yards and the gas chamber, a grisly setting for some 40 executions. Offered too are Ghost Tours that explore reported paranormal occurrences behind MSP walls.

What began in 1839 as Michigan’s first state prison, housed in a temporary wooden structure, would evolve into the largest walled prison in the world by 1882. The massive castlelike structure, with its 12 watch towers and 16 cell blocks, housed as many as 5,280 prisoners. After 150 years, the prison was divided, starting in 1988, into four separate correctional facilities and part of the original complex was converted into residential apartments and an art center. Another section, 7 Block, originally used for quarantine, was renovated to serve as a prison museum and opened for public tours. On a Jackson Journeys Historic Prison Tour, visitors join a historical guided journey, replete with tales of crime and punishment, colorful characters, corruption, daring escapes and riots. A major riot in 1952 involving 2,600 inmates led to the 1954 film “Riot in Cell Block 11.”

When Eastern State opened in 1829, it changed the world of penology. Know for its grand Gothic-style architecture and strict discipline, it was the world’s first true “penitentiary,” a Quaker-inspired prison designed to instill penitence, or true regret, in the hearts of prisoners. The building itself was an architectural wonder and became a model for prisons worldwide. It featured running water and central heat — even before such niceties were implemented at the White House. Its high, arched ceilings and glass skylights mimicked those of a church — so as to inspire reverence. During its more than 180 years of operation, Eastern State housed some notable inmates, including legendary gangsters Al Capone and Willie Sutton. Capone’s cell, complete with fine furniture and oriental carpets, can be seen during one of the old pen’s Hands-On History tours. This unique tour provides interactive experiences (like how to open a cell) and short demonstrations in the dining hall, hospital and “punishment cells.”

Travel
Want a camping reservation in California? Try this
128 views