By Debra-Lynn B. Hook - TNS 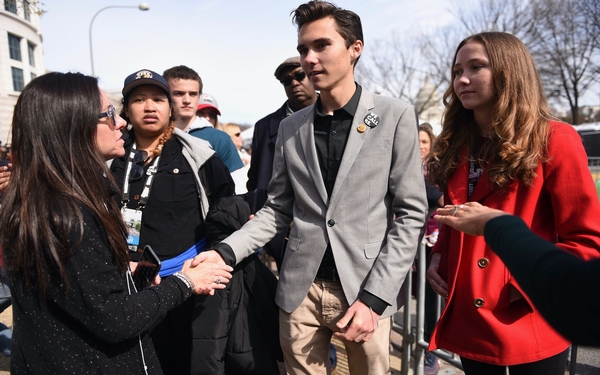 Parkland, Fla. student David Hogg, with his 14-year-old sister, Lauren Hogg, next to him, works the crowd of media after the March for Our Lives on Saturday, March 24, 2018 in Washington, D.C.

Striding through the aftermath of the March for Our Lives in D.C., overnight celebrity David Hogg effortlessly worked the swarm of reporters and camera crews trailing him, shaking a hand here, answering a question there, smoothing his jacket for a CNN interview.

Except he’s 17 and still in high school in a small town in Florida. And he was accompanied by his mom, his dad, and his 14-year-old sister.

“I’ve had to remind him to eat and hydrate,” his mom, Rebecca Boldrick, told me as I trailed along, too.

He and his friends are “the new leaders of the free world,” quipped Rav Vadgama, the producer of “Good Morning Britain,” who had come from London to cover this unlikeliest of American movements and who stood next to me on the sidelines Saturday. Even Pope Francis seemed to be referencing the group the day after the march in his Palm Sunday address in Vatican City: “Dear young people, you have it in you to shout. It is up to you not to keep quiet. Even if others keep quiet, if we older people and leaders, some corrupt, keep quiet, if the whole world keeps quiet and loses its joy, I ask you: Will you cry out?”

Children though they are, Hogg and his fellow student activists from Parkland, Fla., have managed to capture a weary nation’s agenda in the five weeks since Feb. 14, with indeed the raw passion, energy and optimism of youth — a well-spoken, outspoken youth that was in the wrong, but right, place in American history when a 19-year-old shooter with a legally purchased semi-automatic rifle walked into their school and killed 17 of their friends and teachers on Valentine’s Day.

Students of debate, journalism, and drama, residents of an affluent life and community, they are children of voice and privilege who have grown up with the freedom to call it as they see it. Borne of grief, using inborn social-media savvy to get out a platform, in just over a month, they have instigated a national school walk-out to protest Congress’ inaction on gun control; sparked a mother march in the nation’s capital and 800 like her around the world; and maybe most stunningly, begun to penetrate America’s good-old-boy system, holding politicians’ gilded feet to the fire if they take a penny in campaign contributions from the powerful NRA gun lobby.

“If you listen real close, you can hear the people in power shaking,” Hogg roared to the crowd of 800,000, which roared back with the chant that became the mantra of the march: “Vote them out! Vote them out!”

“You’d better take that (NRA) check and put it in your retirement fund because we are going to vote you out,” said high-school junior Jackson Mittleman, who was a student at Connecticut’s Sandy Hook Elementary School during that school’s 2012 mass shooting.

They are brash. They are refreshing. They are what provoked Sue Topham to get on a snowmobile with her husband and her 13-year-old son at her home in Mackinac Island, Michigan, which took her to a ferry boat, which took her to her car, in which she drove her and her family to DC. for the rally. “I wanted my son to see what something like this is like,” she told me as she waited for the rally to start. “I wanted him to see that kids can have the power to make a difference, and these kids from Parkland started that.”

Before it was over, some 20 young people — and only young people — would speak, as young as 9-year-old Yolanda Renee King, granddaughter of Martin Luther King, and ending with Parkland’s buzz-cut icon, senior Emma Gonzalez. Gonzalez spoke a few words, then dropped into a chilling silence that lasted the six minutes and 20 seconds it took for Nicholas Cruz to stop shooting her friends. The crowd didn’t know whether to clap or chant at first and then, realizing what she was doing, we all went silent, too.

We cried when they cried and laughed too, with Parkland high-schooler Sam Fuentes who giggled nervously as she started to speak, then leaned down behind the podium as two people moved to help her. After a few seconds, she stood back up to finish her speech.

“I just threw up on international television, and it feels great,” Fuentes said, laughing again into the microphone, before asking the crowd to join her in singing “Happy birthday” to Parkland victim Nicholas Dworet who would have been 18 the day of the march.

Representing Parkland, Sandy Hook, and also less-publicized gun killings in inner-city Chicago, New York and Los Angeles, young activists stepped up to a microphone in front of almost a million people, their voices echoing all the way down Pennsylvania Avenue, demanding better gun laws and better supports for inner-city communities. They called on Americans to vote out politicians in the 2018 midterm elections who don’t vote for better gun control, and to organize town halls on gun control in every Congressional district, and if one representative refuses to come, invite his or her opponent.

In a rare bridging of the great divide in this unavailingly divided country, they also called for politicians to stop reducing the issue of gun control to a fight between Democrats and Republicans.

“This is not a red, white and blue issue.” said an emotional Parkland junior Sarah Chadwick. “This is a morals issue.”

It is a new day in America when young people find a way to move through the muck adults can’t seem to. These particular students are in a particular position of strength, their grief out in front of them like a shield. No politician, at the risk of appearing callous, would seriously take that on.

They’re the new leaders of a broken system, and like the Tom Haydens and the Abbie Hoffmans of the Vietnam-War protests, they are young and not going anywhere. We just need to do is get out of their way, apparently.

“The adults don’t know how to use a (expletive) democracy. So we have to,” says Hogg, a 4th-year broadcast journalism student at his high school. “This is my lifelong mission now.”

For now, the march is over. It’s spring break week, which Hogg’s family of four will spend in D.C., where David’s lean form and angular face will likely be recognized on the street, and often.

His mother, who recently changed her email to start with “momofdavidhogg,” said David asked her to buy a disguise for him, maybe a Rasta wig. But then, as we both watched him accept thanks from a rally-goer and then take a question from a reporter, she admitted: “He was just kidding.”

“No,” he said. “The crowd gives me energy and keeps me going.”

And the 17-year-old moved on to shake another hand.

(Debra-Lynn B. Hook of Kent, Ohio, has been writing about family life since 1988. Visit her website at www.debralynnhook.com; email her at dlbhook@yahoo.com, or join her column’s Facebook discussion group at Debra-Lynn Hook: Bringing Up Mommy