The California Navels: Peel into Another Era 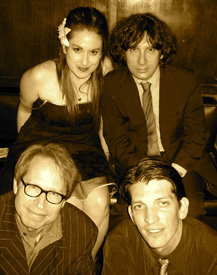 In this fast-paced world of „Click here and win!,‰ instant MySpace friendship and 15-second news stories, sometimes it‚s gratifying to sit back, relax and appreciate something classic and unhurried. Welcome, then, to the California Navels.

What the ensemble does is nothing new or original, but is definitely appealing (pun intended). They recreate the pop, novelty and jazz tunes of the ‚20s and ‚30s, the soundtrack of a generation that experienced flappers, Prohibition and the Great Depression, when a smile in your heart actually meant something.

They also craft new songs that replicate the ‚20s and ‚30s. It may seem nostalgic, which is a factor in listeners‚ fascination. But there‚s more than yearning for a different era, as the California Navels founder Mark Fletcher explains, „The simple answer is that it‚s good music with a broad appeal that doesn‚t require either the audience or the musicians to wear earplugs, and most people almost automatically recognize the music as such. It‚s part of the collective unconscious.‰

These are not hidden compositions that have disappeared from our contemporary, cluttered culture. Fletcher makes clear, „That music is all around us most of the time. Broadway is forever reviving or parodying musicals from that period.‰ Examples abound, including Paris Hilton‚s soapy Carl‚s Jr. „I Love Paris‰ television ad, Chicago and numerous jazz artists continue to find inspiration in standards written just before or during the Depression.

The California Navels story began in the late ‚90s when Fletcher, who has worked with rock bands such as Spooky Pie, the Bunny Rabbits and the Power Munchkins, became inexplicably fixated on organizing a Prohibition-era jazz and novelty band.

„Developing an interest in it was more of a conditioning process,‰ Fletcher recalls, „from the time I was a little kid, Betty Boop cartoons were on TV, along with early musicals. When I was 13 or 14, I started reading R. Crumb comics and they were another heavy dose of that 1920s-‚30s aesthetic.‰

From there, it was an easy step to watching old cinema on American Movie Classics and at the Silent Movie Theatre on Fairfax, and listening to old jazz on KPCC, and Fletcher decided he, too, could form a small combo to play the music he loved.

Lately the troupe has performed mostly in the Echo Park/Silverlake area at Taix Lounge, Spaceland and other local clubs, but they have been spotted in the past in Sierra Madre, Hollywood and Pasadena. The turnout at live gigs is very supportive, and Fletcher says fans have expressed a fondness for favorites like Cab Calloway‚s hit comedic narrative „Minnie the Moocher‚s Wedding Day,‰ up-tempo „I Just Roll Along‰ and „Sweet and Lovely,‰ which usually takes a bizarre, psychedelic turn.

Fletcher acknowledges the California Navels have the same goal as most artists, „We want to make lots of money and quit our day jobs. Maybe put out an album that people will buy and radio stations will play. That would be nice.‰ He humorously adds, „And some of us would also like to see our groupie status improve.

The California Navels will perform June 7 at Casey‚s Irish Bar & Grille, in Los Angeles and June 17 at the Steve Allen Theater, in Hollywood. For more information, visit www.thecalifornianavels.com.
Article posted on 6/5/2006
This article has been viewed 1971 times.