In Lynn Shelton’s moving drama ‘Outside In,’ Jay Duplass is poignant as an ex-con in love 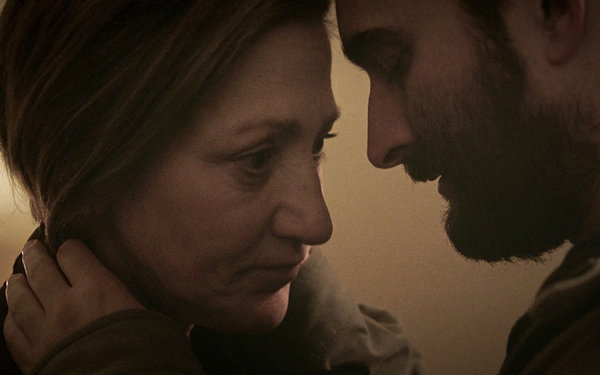 Carol (Edie Falco) and Chris (Jay Duplass) in Lynn Shelton's Outside In. (TIFF )

One of the bittersweet recurring images we see in “Outside In,” Lynn Shelton’s sharp and stirring new drama, is of a man riding his bicycle. Chris (Jay Duplass), a scruffily handsome 38-year-old, has just returned to his sleepy Pacific Northwest hometown after two decades in prison, having received a mandatory minimum sentence for a crime he didn’t commit. Riding his bike feels like both a blissful assertion of his newfound freedom and something of a sad throwback to his teenage years, a more innocent time before his life was so cruelly derailed.

We never learn the exact details of the felony for which Chris wound up taking the rap; indeed, a brief, explosive verbal flashback to that fateful night is one of the few missteps in this otherwise beautifully assured movie. The past may weigh heavily on Chris and the few people who are still in his life, but what concerns Shelton, who directed the film from a script she wrote with Duplass, is how her characters adjust to the difficulties of the present.

For Chris, those difficulties come in all shapes and sizes: He’s mystified by the weirdly ubiquitous phenomenon that is texting, and his criminal record makes it all but impossible to find work. Now stuck living with his estranged brother, Ted (Ben Schwartz), he feels alienated from old friends and new acquaintances alike. The only person he’s genuinely excited to see, and as often as possible, is his old high school English teacher and longtime advocate Carol (an unsurprisingly superb Edie Falco).

Carol, we learn, spent years calling Chris every week, keeping him busy with regular homework assignments and doing the legal research that helped ensure his early release. The two manage to downplay their mutual affection at an awkward welcome-home party for Chris, but the first time they meet in private, the intensity of their bond shines through: It’s there in the smile that suddenly lights up Carol’s careworn features, in the infectious laughter that suffuses their conversation, and in the quiet determination with which Carol at one point gently pulls her hand away from Chris’.

In nearly every respect, their relationship made more sense when one of them was behind bars, and “Outside In” charts the emotional confusion that sets in as they try to adapt. Their once-frequent phone calls suddenly take on an air of secrecy, as do their occasional in-person meetings. At home, Carol struggles to connect with her lumpen, incommunicative husband (Charles Leggett) and their moody teenage daughter, Hildy (Kaitlyn Dever). These domestic troubles explain both Carol’s deep sense of attachment to Chris and her reluctance to act on that attachment, despite his own heartbreakingly sincere declarations of love.

When Carol draws a temporary line in the sand, Chris naturally gravitates toward Hildy and begins hanging out with her. The film, aware of the potentially icky implications of this development, makes clear that there’s no prurient interest on Chris’ part; it’s simply a way for him to be close to Carol when he isn’t actually able to spend time with her. As for Hildy, played by Dever with acute sensitivity and a persuasive air of ordinary teenage recklessness, she feels an instinctive sympathy for Chris as well as a certain curiosity about a selfless, determined side of her mother she doesn’t often see.

As evidenced by her earlier independent comedies like “Humpday,” “Your Sister’s Sister” and “Laggies,” Shelton has a knack for three-way relationship studies; she knows exactly how to braid together two characters in a way that comments insightfully on a third. Working with her cinematographer, Nathan M. Miller, she keeps the camera close to her actors, sometimes making expressive use of the gray overcast skies stretching overhead but for the most part letting the characters speak for themselves.

Duplass’ puppy-dog affect may seem softer than you’d expect for a character who spent 20 years behind bars, but the actor’s quietly wrenching performance gives the lie to any easy assumptions about the experience of the incarcerated. And Falco, whose Carol at times seems positively dazed by her sheer capacity for feeling, gives a performance of aching depth and subtlety; this could be the finest work she’s done in a movie since 2002’s “Sunshine State.”