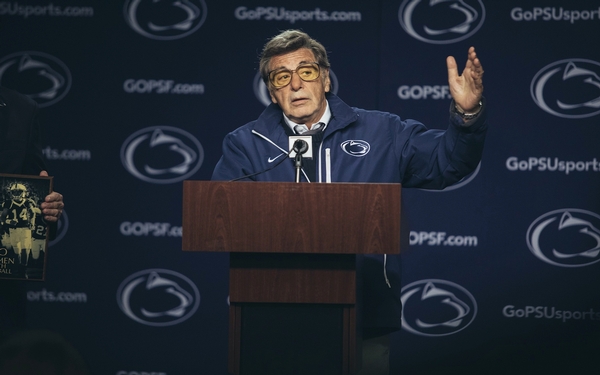 There was a time when the idea of Al Pacino doing television seemed as unlikely as the pope hosting “Saturday Night Live.” But as the small screen became more prestigious, and movie studios grew less enamored of urban dramas driven by characters desperately in need of a nap, Pacino was one of the many actors who broadened their horizons.

“Paterno,” premiering Saturday, marks the 77-year-old actor’s fourth collaboration with HBO in 15 years, a partnership that has paid off with two Emmy wins (“Angels in America” and “You Don’t Know Jack”) and a third nomination (“Phil Spector”).

During that same span, Pacino has failed to dazzle at the big-screen box office, unless you’re one of the 18 people who giggled at the sight of him courting Adam Sandler in “Jack & Jill.”

That transition may be a source of frustration for movie lovers who grew up watching Pacino as Michael Corleone, crossing over to the dark side in “The Godfather” saga, or bank robber Sonny Wortzik, whipping New Yorkers into a frenzy by chanting “Attica!” in “Dog Day Afternoon.”

But from Pacino’s perspective, HBO gives him the opportunity to go deep on real-life figures more complex and challenging than any member of the Avengers.

“It’s attractive for actors to do characters that have existed, because they’re the steppingstones. They’re the thing that gets you there,” he said in January. “And, also, there’s a certain credibility, because these things really happen. It fortifies you, in a way. You have the real person to digest, to sort of channel. I think that’s very important, at least for me, anyway.”

In his latest film, Pacino tackles Joe Paterno, the legendary Penn State coach, during the two weeks before he was fired. The film, co-starring Riley Keough and Kathy Baker, focuses on Paterno’s reaction — or lack thereof — as allegations of sexual abuse leveled at his former assistant, Jerry Sandusky, came to a boil.

Pacino doesn’t have a lot of dialogue. He spends most of the film staring wide-eyed behind oversized glasses at either football footage or family members debating his future as if he’s not even in the room.

“At the beginning of the movie, he’s at the height of what he is, in terms of recognition as a legend,” said director Barry Levinson, who has had his fair share of success in both feature films (“Rain Man”) and TV (“Homicide: Life on the Street”). “Within two weeks, the world crashes down around him in the scandal, and he finds out the fact that he will die — and does die shortly thereafter. It’s a complicated piece.”

Sandusky’s guilt is never in doubt. The big questions are: How much did Paterno know and when did he know it?

In a chilling scene, Paterno’s wife (Baker) reminds her husband that Sandusky used to play with their children in the swimming pool. It’s a memory that doesn’t register with him.

“I’ve known football coaches who have that innately — this ability to focus — because football is a very complicated game, very complicated, with many, many plays and many variables,” said Pacino, who played a fictional NFL coach in 1999’s “Any Given Sunday.” “At one point in the movie he says to his son, ‘I didn’t see it.’ I think that meant a lot to Joe. As a savant, he saw football. I mean, this was an educated man. I think it meant a lot that he didn’t see something, and he needed to see it.”

One of Paterno’s sins was his unwillingness to adapt. Pacino, on the other hand, has adapted well to television, a medium with smaller budgets and less shooting time.

“There’s pros and cons in that, yeah,” he said back in 2010 after playing assisted-suicide proponent Dr. Jack Kevorkian in “You Don’t Know Jack,” also directed by Levinson. “I mean, there’s something about going fast that creates certain spontaneity, and if you’re with highly tuned people like Barry, they’re not going so fast that they’re negligent. You know, you do get very tired sometimes when you’re sitting around for hours doing movies and you sort of get depleted. Here, that doesn’t happen.”

Not that Pacino has given up on the big screen. He’s playing Jimmy Hoffa in the 2019 film “The Irishman,” written by Steve Zaillian (“Schindler’s List”) and directed by Martin Scorsese.

That combination certainly sounds like Oscar bait. But if the public doesn’t bite, Pacino still has HBO.