Bryan Cranston, Bill Murray get their bark on for Wes Anderson’s ‘Isle of Dogs’ 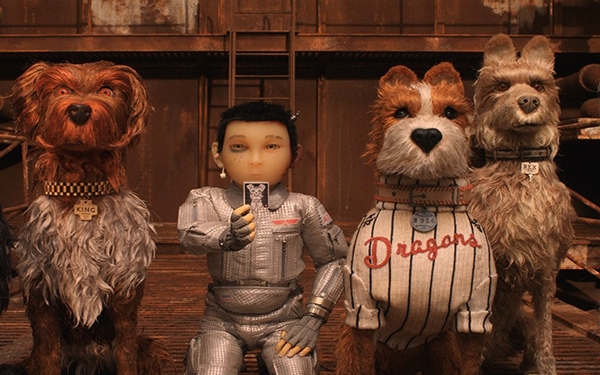 For Wes Anderson fans, “Isle of Dogs” is a delightful treat. Clever, funny, sharply written and utterly ridiculous, it brims with the writer-director’s signature deadpan humor and excruciating attention to detail.

If Anderson’s films are not your thing, I get it. I have heard from a number of folks over the years who were dumbstruck when I gushed over the glories of “Fantastic Mr. Fox,” “Moonrise Kingdom” and “The Grand Budapest Hotel.” (You’ll want to spend your money elsewhere at the multiplex, because “Isle of Dogs” is exceedingly Andersonesque.)

Our heroes in this animated comedy-adventure are — you guessed it — an eclectic group of canines. Set in the future, in the fictional Megasaki City, Japan, we learn that the powerful Mayor Kobayashi (voice of Kunichi Nomura) comes from a long line of anti-dog stalwarts. Using an outbreak of “dog flu” and “snout fever” as an excuse, Kobayashi banishes all dogs to the miserable Trash Island, a dumping ground for waste and rusting technology.

The cats are thrilled.

Once exiled to Trash Island, the dogs are left to fend for themselves, join desperate packs, or slowly wither with disease. But there are some hopeful signs. Into this mangy mess hurtles the mayor’s nephew, Atari (Koyu Rankin), a 12-year-old who piloted his own plane, until it crash-landed, and fulfills a plot device as old as motion pictures themselves: a boy in search of his beloved dog.

He is trying to find Spots (Liev Schreiber), the family dog who was, symbolically, the very first pooch to be banished.

The anxious banter between this shaggy group is priceless, and they are sometimes helped (and sometimes hindered) by an outlier with psychological demons, a cranky stray named Chief (Bryan Cranston) who likes to remind everyone, “I bite.”

The dogs speak English; the people speak Japanese. There are no subtitles, but some speeches are funneled through interpreters (including an earnest Frances McDormand).

A swirling subplot involves a group of pro-dog student activists, who are hatching a plan back in the city to save the animals. They are led by a feisty foreign exchange student named Tracy (Greta Gerwig).

Anderson has been criticized in some circles for cultural appropriation and for having the leader of the upstart students be a “white savior” type. In retrospect, those are fair points. But I have to admit that I gave them zero thought while I was watching the film. It’s a goofy movie about dogs and a cute kid, not a slam at Asian culture.

In addition to the laughs, Anderson’s film is also an homage to many of the wonders of Japanese film, art, architecture and music. And it is wrapped in all of his framing tricks, camera angles and other quirky methods: extreme close-ups of dog faces, dog tears, bad teeth, sushi preparation. News reports are delivered on vintage black and white TVs. Flashbacks are followed by the words “End of Flashback.”

In the tradition of “Fantastic Mr. Fox” from 2009, “Isle of Dogs” was created using stop-motion animation. It is a wildly painstaking process using puppets, in which the tiniest movements of a whisker, an ear, a jaw, a paw, multiplied by thousands of movements, takes weeks, months, years to shoot.

And because of that extra-long process, it’s funny that the film contains several timely touchstones. There’s fear-mongering, bogus elections, deportations, stereotyping of “the other,” government lies and brainy student protesters stirring up the masses.

OK, maybe there are some socio-political undertones. But our heroes remain a 12-year-old pilot and a bunch of chatty dogs.

Rating: PG-13 for mature themes and some violent images.